The cobbled Classics have become a natural testing ground and launchpad for manufacturers' latest bump-taming designs, and 2013 has been no different from the norm in this respect. We’ve seen bikes like Trek’s Domane and Specialized’s Roubaix SL4 breaking cover at these races in the past years. This year it’s the turn of Cannondale with a new Synapse and Bianchi with their updated Infinito. 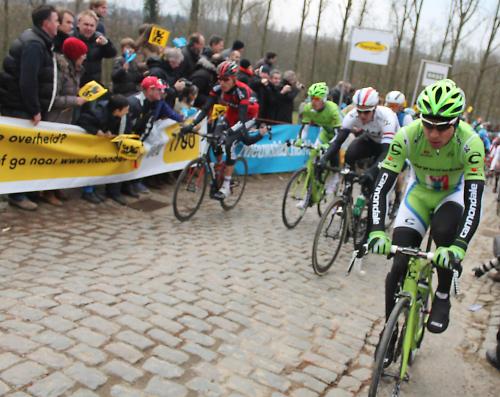 The eagle eyed will have noticed that it wasn’t a Cannondale SuperSix Evo, the team's regular bike, that Peter Sagan rode to victory at Gent-Wevelgem. It was something else. Something new. Sagan and most of the team were riding the new bike at Ronde Van Vlaanderen too, though we spotted a few SuperSix’s being used as well.

We’re guessing here, using our best detective skills, that it’s an update to the Synapse. It might not even be called the Synapse, it could be an entirely new model, as it carried no identifying decals. The Synapse is Cannondale'ssportive/endurance/comfort (choose your pigeon hole) bike. It’s been around for a few years, and with all the recent focus on the Evo, it’s high time the Synapse benefited from an update. Nothing wrong with the old one, but that’s the pace of development for you. We liked it very much when we reviewed it. 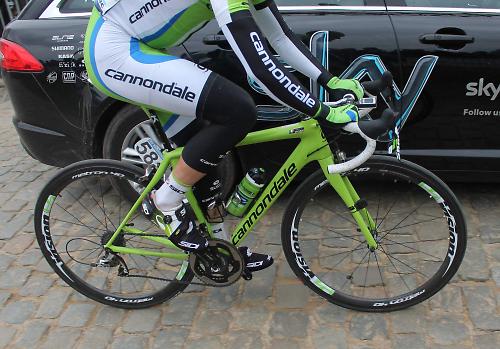 What we can deduce from looking at this new model is that it’s a SuperSix designed with comfort in mind. The chainstays have a flattened mid section and the seatstays are very skinny and tapered. Along with the shaped fork which has a dramatic curve to the trailing edge, these look designed to offer a small degree of flex. Unlike the SuperSix Evo's, both gear cables are routed internally, and the brake cable flows inside the top tube. 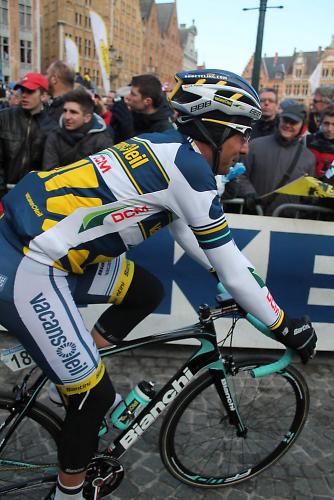 What this? Juan Antonio Flecha on a new Bianchi Infinito? We reviewed the current model not so long ago, but this looks like a major overhaul of their endurance/comfort model. We expect it to borrow some of the carbon technology from the Oltre XR with a similar tapered head tube (the current Infinito doesn’t have a tapered head tube) and BB30 bottom bracket. There’s a lot of shaping of the chainstays, which bend inwards towards the rear wheel, and very slender seatstays which stay apart right up to the seat tube junction. There’s some distinctive shaping of the head tube. The cables appear to be routed internally as well, as they are with the old model. No official word from Bianchi yet although they've invited us to a press launch this Thursday, so stay tuned for that ... 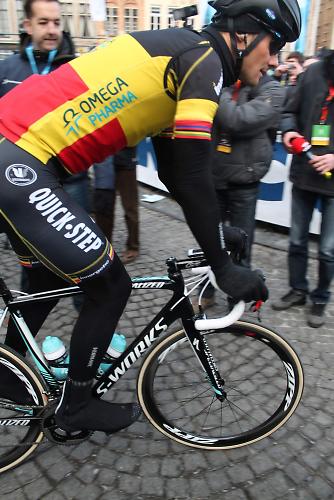 Tom Boonen and his Omega Pharma Quick Step team mates were using the regular Specialized Tarmac SL4, rather than the Roubaix SL4 that was designed for races like Flanders and Paris-Roubaix. The cobbles of Flanders, while still rough, are much smoother than those found at this weekend’s race and, with a large chunk of roads to race on, the Tarmac SL4 seemed to be the preferred choice. The team bikes were all very similarly built: SRAM Red groupsets, Zipp 303 wheels with FMB Paris-Roubaix 25mm tubular tyres, and Zipp bars, stem and seatposts. 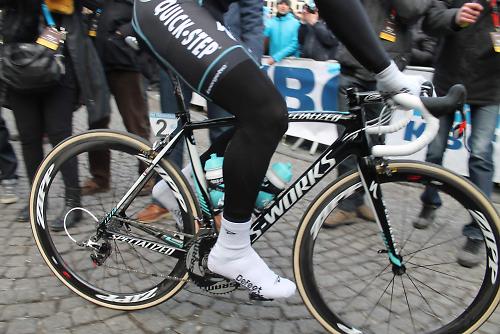 Boonen was riding the stock Red chainset while some of the team, like Sylvain Chavanel, were using the Quarq power cranks. 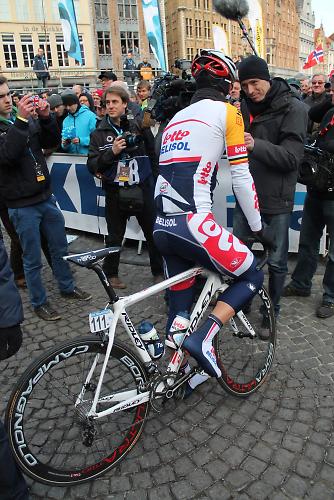 Jurgen Roelandts rode his Ridley Fenix to a podium finish, finishing behind Cancellara and Sagan. The Fenix sits alongside the Helium SL and Noah Fast and has a completely new rear end. There’s a wishbone seatstay design with slim seatstays, flatter and narrower in the middle, designed to flex in order to absorb vibrations caused by riding over rough roads. Naturally, there's a tapered head tube as befits any modern frame. There’s also internally routed cables, and it’s Campagnolo EPS (electronic shifting) compatible. The Lotto-Belisol were using Record EPS for this race. We still spotted a few Helium SLs, but most of the team were on the Fenix. 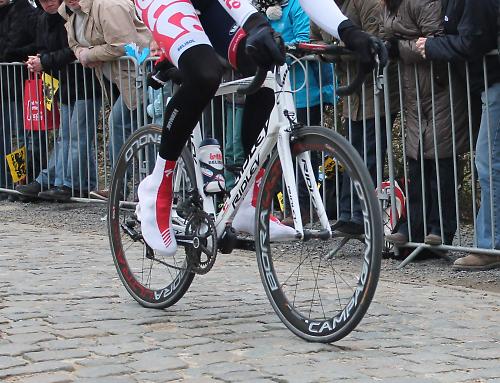 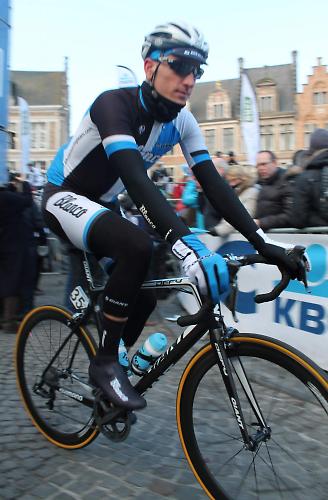 Team Blanco opted for Giant’s Defy Advanced SL instead of the TCR or Propel. Like the Roubaix and Synapse, it’s a bike designed for rough roads like those of the Spring Classics. The seatstays form a very small rear triangle by joining the seat tube below the top tube and this is claimed to help the frame absorb the vibrations caused by the cobbles. 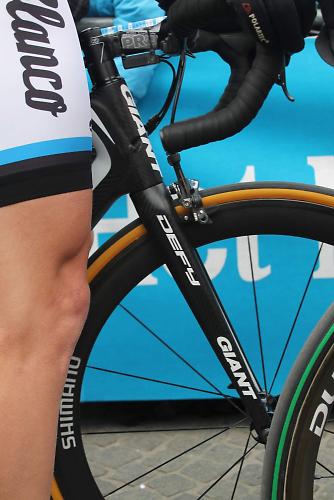 The frame has an integrated seat mast, which adds to the comfort factor, and there’s a tapered head tube up front. Other changes, on the production bikes at least, are the taller head tube and longer chainstays, with a shorter top tube. Frame weight is an impressive claimed 799g. 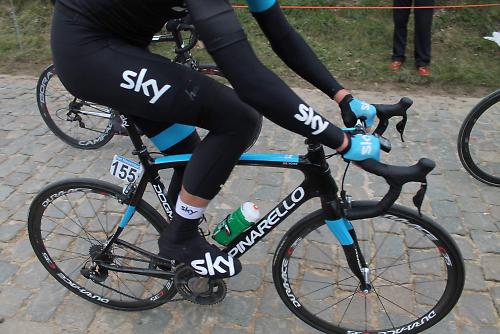 Most of the Team Sky riders, including Luke Rowe (above), where riding the DogmaK. We profiled this bike in detail from Gent-Wevelgem, but to recap, it’s the endurance/comfort version of the Dogma 65.1 Think 2 that they use the rest of the year. You can detect clear differences between the two at the rear of the frame.

Another thing to notice is how much the chain is flapping about. A lot of riders were tackling the long Oude Kwaremont in the big ring, but riders further back in the bunch were conserving energy in the small ring. Luke has also pushed his SRM unit down and presumably out of sight. Clearly the feedback from his legs was enough information, and didn’t need to know how many watts he was churning out. 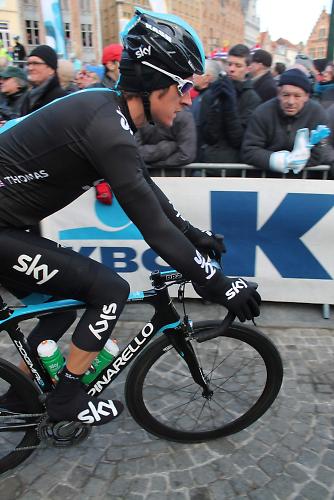 The seatstays are slender in profile with a slight arc, and they meet at the seat tube rather than having the wishbone layout of the Dogma 65.1. The fork is different as well. Geraint Thomas, however, chose the Dogma 65.1 Think 2. 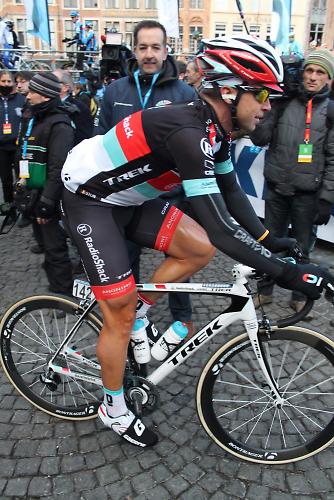 Fabian Cancellara conquered all to win the race aboard his Trek Domane. And most of the Radioshack team were riding the same Domane. Here’s the standard team colour scheme, which looks rather cool. Stijn Devolder (above) has the course information taped to the top tube for easy reference. Unlike Fabian who prefers a mechanical groupset, Devolder is running Shimano’s Dura-Ace Di2 9070 11-speed groupset, but with 7800 cranks so he can use his SRM power meter. The same Bontrager Aeolus 5 wheels as Fabian too, with natty white spokes. Tyres are FMB Paris-Roubaix 25mm tubs used on all the team bikes. 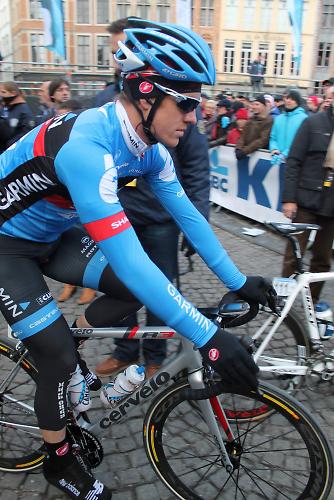 This is Tyler Farrar on his R3. The Cervelo R3 may have been around for a few years now, but it’s still a very good bike, and is the default choice for Team Garmin Sharp. I’m not sure about the grey colour scheme this year, personally. Mavic 50mm Cosmic Carbone tubulars for all the team with Mavic branded tubs. 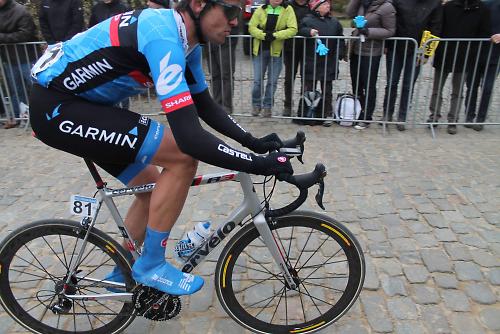 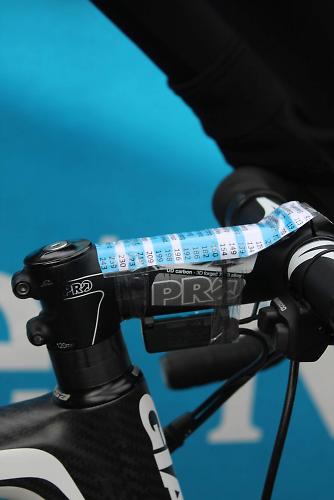 Changing gear when you’re bouncing over the cobbles can be tough. This Blanco rider has fitted a set of Shimano Di2 remote shifters to the middle section of the handlebar, so he can change gear while still clasping the tops. And look at the stack of spacers under his stem - that's a high rise by professional standars. He’s also gone for course notes taped to the 12cm stem. Not all pro riders go slammed and stretched. 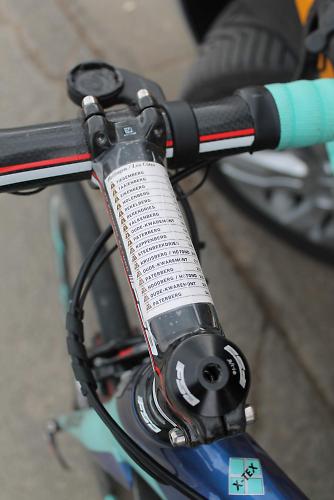 Course profile notes taped to the stem is a popular addition for some, but not all, riders at this race. It helps to know what is coming up. 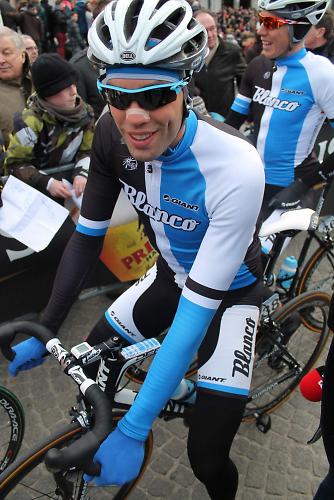 Team Blanco’s Maarten Wijnants has the course notes taped to his top tube. 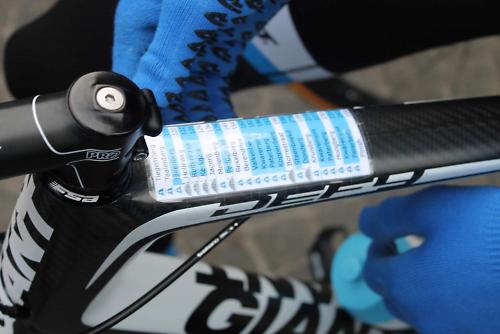 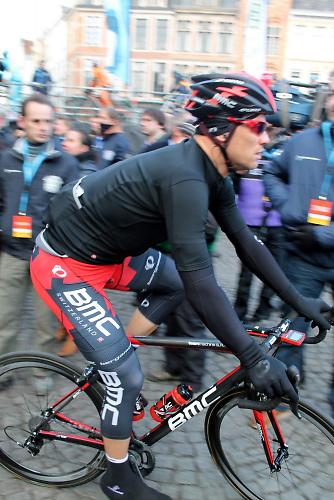 BMC have the GranFondo model for rough races like this, but most of the team were riding the TeamMachine. I didn’t spot one GranFondo at all. Here’s Thor Hushovd, who isn’t having the best of times at the moment. He's using Shimano C50 carbon tubular wheels, Shimano 7900 mechanical 10-speed groupset and a 3T cockpit. And are those Assos gloves? Yes they are. The team is sponsored by Pearl Izumi. And yes, that is a Castelli Gabba jersey. Oh, and Hincapie overshoes as well - last year’s sponsor. 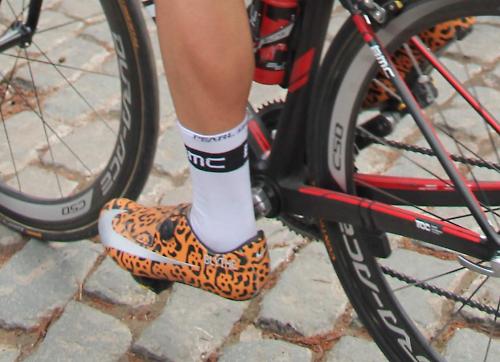 You spot some unusual things if you look hard enough. BMC rider Adam Blythe was wearing some very funky custom Nike shoes. Nike doesn’t produce cycling shoes for the public like it used to, but the company still makes shoes for a few select riders. It looks a bit like a Bont with a large flap over the front of the shoe and a Boa dial. 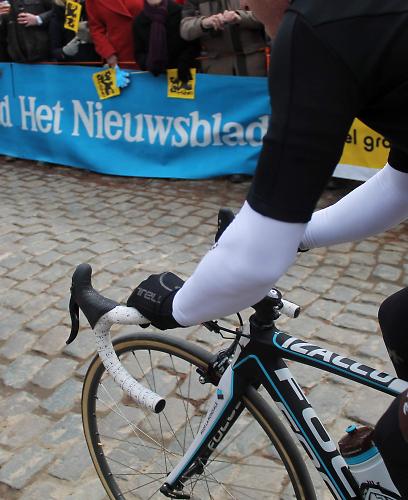 Castelli gloves for this Ag2r-La Mondiale rider. Their clothing sponsor is ODLO. It's great marketing for Castelli when even riders with whom they don't have a sponsorship agreement are using their kit. 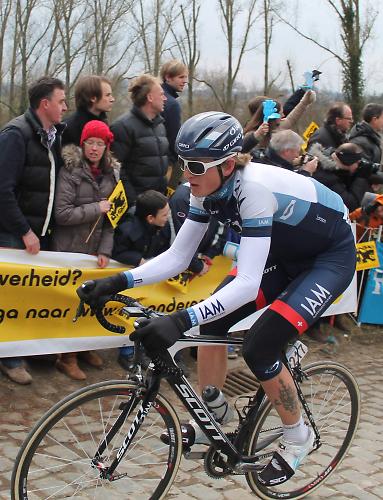 Gustav Erik Larsson has been rocking the new Giro Air Attack helmet and these odd white sunglasses this season, and standing out in the peloton. No idea if the shades are a bet or he’s trying to start a new trend. 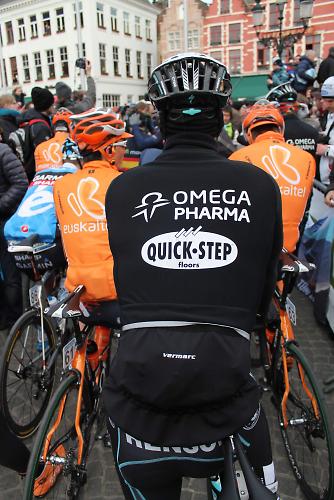 The Castelli Gabba, a short sleeve windproof/water resistant racing cut jersey was popular with non-Castelli teams at Milan-San Remo. But this is Vermarc’s take on the Gabba. We've got no info about it so we’re left to presume it’s a work in progress. It appears to be a similar design though, with short sleeves down to the elbows, dropped tail, three pockets and, we presume, a wind-resistant fabric. 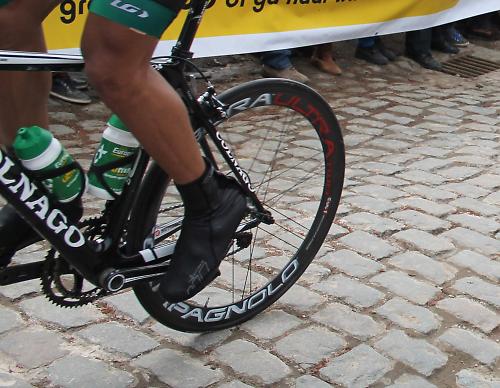 More evidence of deep-section wheels, this time Campagnolo’s Bora Ultra 50mm carbon tubular on Europcar’s Colnago. This rider on the Molenberg climb was using the company’s M10 while most of the team were on the C59. 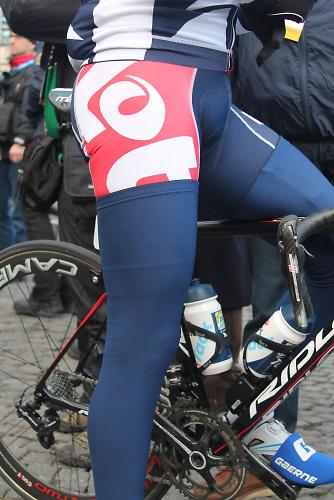 This is how you wear leg warmers for easier removal later in the race. 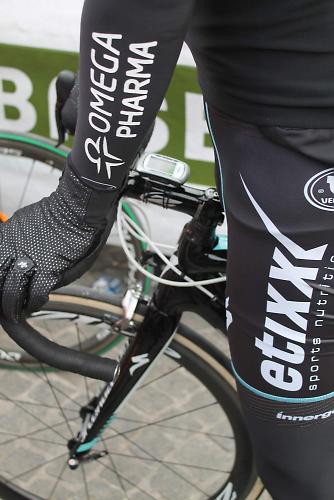 We see a lot of non-sponsored kit at races like this, as the weather and demands of the race push the riders to make personal choices. This is Zdenek Stybar wearing a pair of Assos gloves. His Omega Pharma Quick Step team aren’t sponsored by Assos. 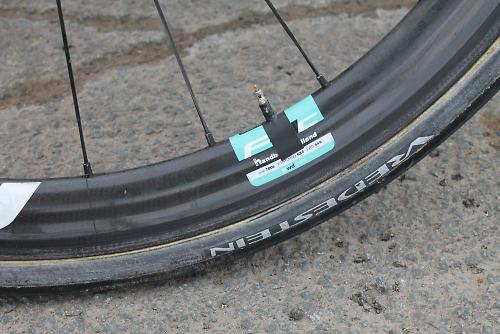 Taping of the valve holes is an old trick to stop the valve rattling in the rim.

You can see all the 2013 WorldTour bikes here.