Wheels, seatposts and a cheaper version of the Integra stem with a built-in Garmin mount
by Mat Brett

Actually, before we start, it’s worth noting that every 3T product falls into one of these categories:

Some products – all of 3T’s road handlebars, for example – have a version in each category but others don’t. The Arx II stem, for instance, comes in Team and Pro models, but not in a Ltd version.

Make sense? Commit it to memory: we’ll be testing you next week.

Let’s crack on with the wheels… 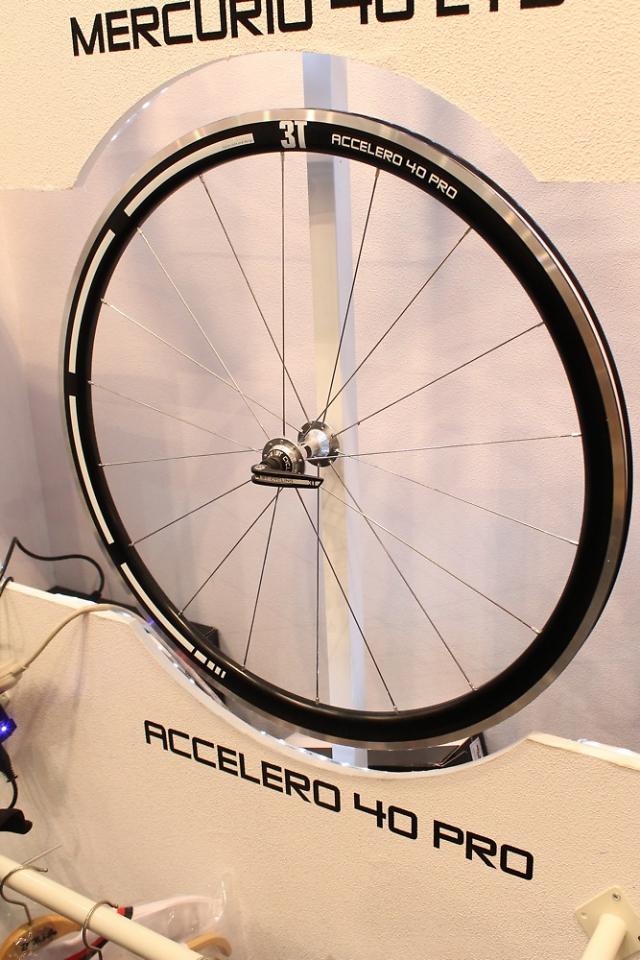 The Accelero aero clincher wheels come in 40 and 60 versions. The alloy 40 Pro, which is actually 37mm deep and 23mm wide, has been redesigned with some weight taken off the rim to bring the weight down to 1,725g. The price is £449.99. 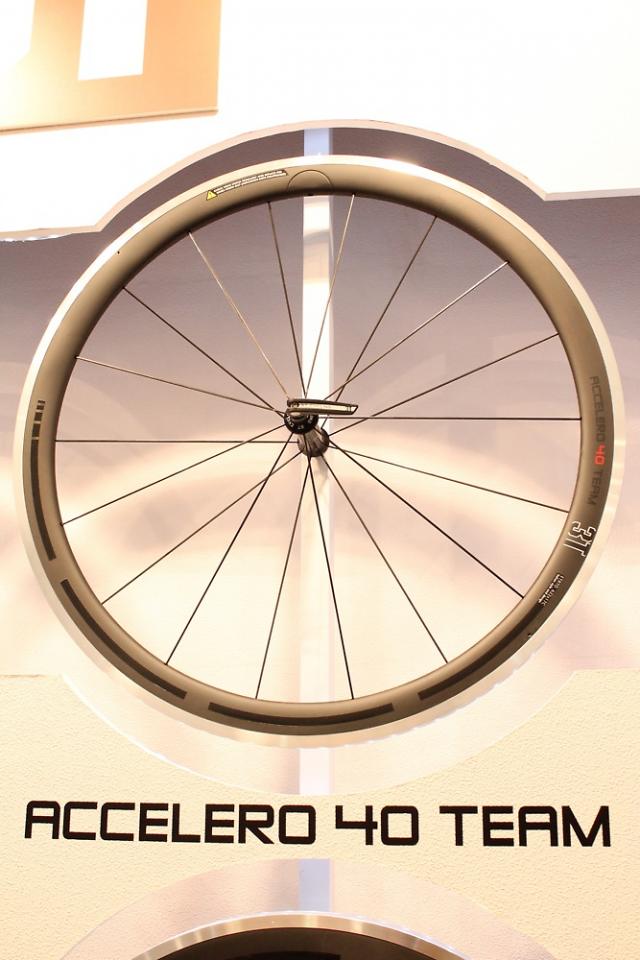 Team versions of the Accelero wheels, in both 40 and 60 models, will be available for the first time in May. The rims are carbon-fibre with a 6000 Series aluminium tyre bed and brake track. 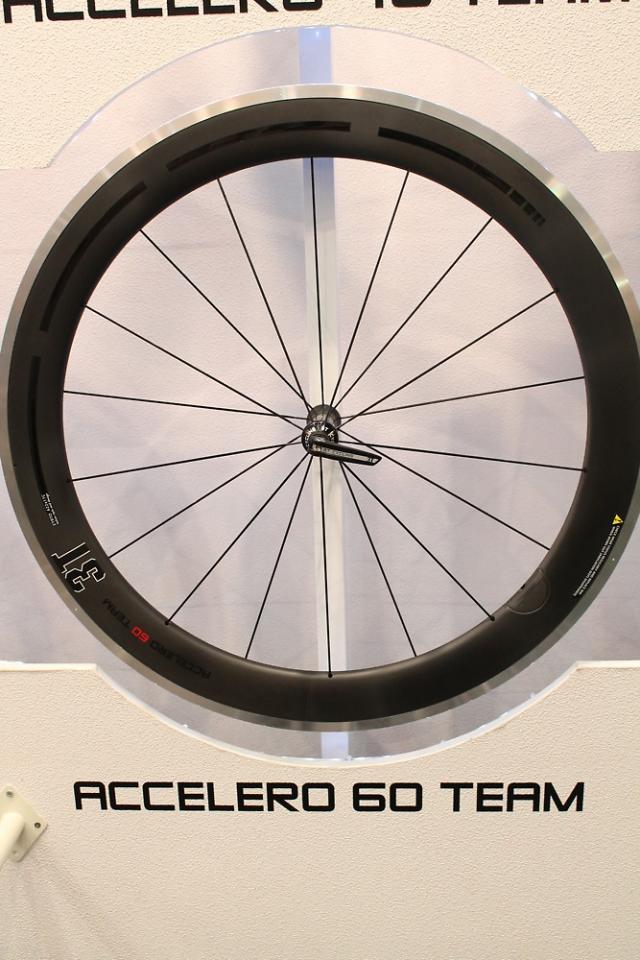 The carbon is structural rather than simply a fairing. 3T say that using the two materials together allows them to produce lighter wheels. The Accelero 40 Team is £1,199 and the Accelero 60 Team is £1,249.

Top-level Ltd Accelero models, both the 40 and the 60, will be coming out later in the year – probably arriving in the UK in September or October. They’ll be full carbon clinchers using the same pocket rims, straight spokes and hubs of the existing tubular Mercurio Ltd wheels. The prices have yet to be confirmed. 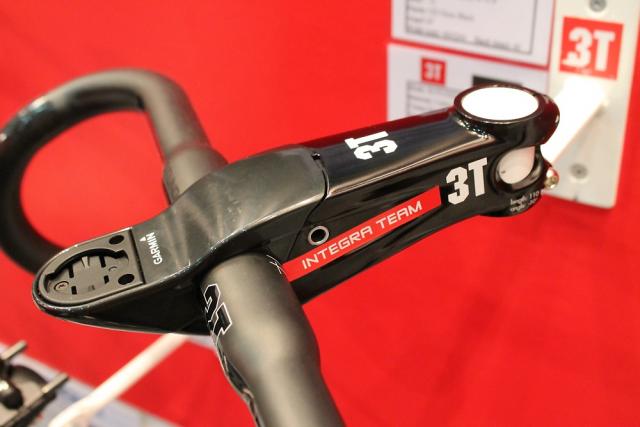 The Integra stem, which allows you to fit a Garmin Edge computer on the cap, has been available in a carbon Ltd version for a while but it has now been joined by a Team model in forged aluminium. 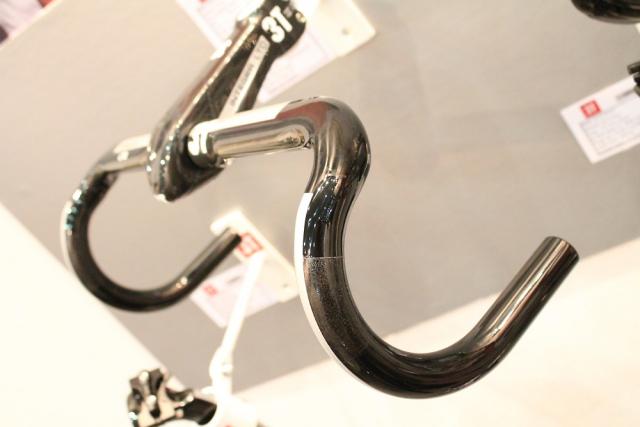 The Tornova handlebars are new for 2013. The design is essentially a hybrid, 3T taking the flattened tops of the Ergonova and combining them with the classic round drops of the Rotundo. It has a 139mm drop and 83mm reach, and it’s available in 40cm, 42cm and 44cm widths.

This is the Ltd version, made from high modulus carbon fibre, that features internal cable routing and a ‘step’ above where your shifter clamp will sit, so the shifter will align flat with the top of the bar. 3T give a weight of 180g.

We’ve reported before that 3T have rejigged the structure of their seatpost range and you now get to choose between the Ionic and the Stylus. Each model is available with an inline clamp or with 25mm of setback, and in the usual Pro, Team and Ltd versions. 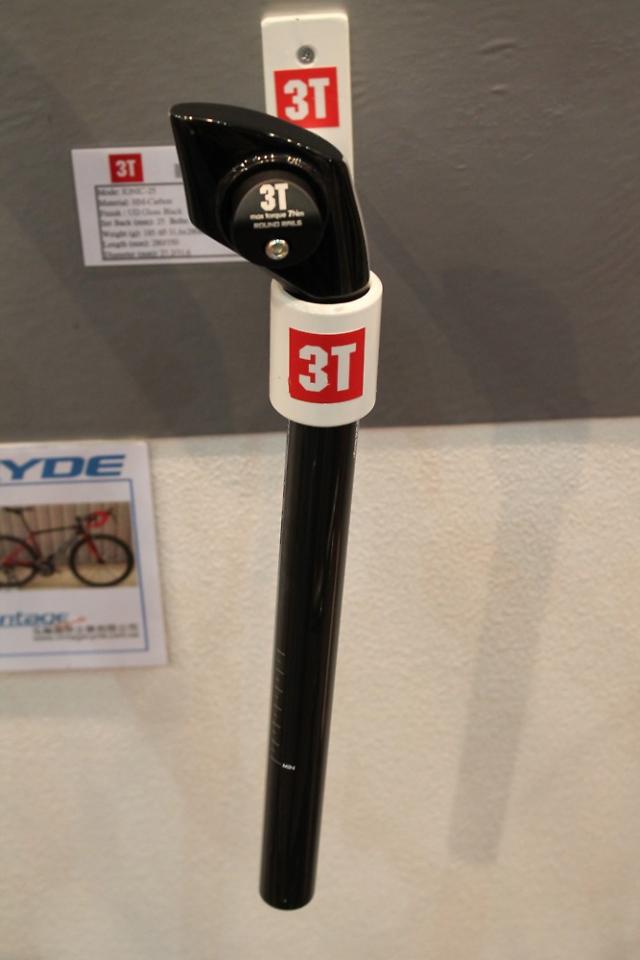 The Ionic posts come with 3T’s own DiffLock seat clamp previously used on the Palladio. It’s a splined mechanism that’s very easy to adjust accurately. The standard fitment takes only round rails but 3T can supply oval-rail clamp caps. The Pro versions of the Ionic are alloy while the others are carbon fibre. 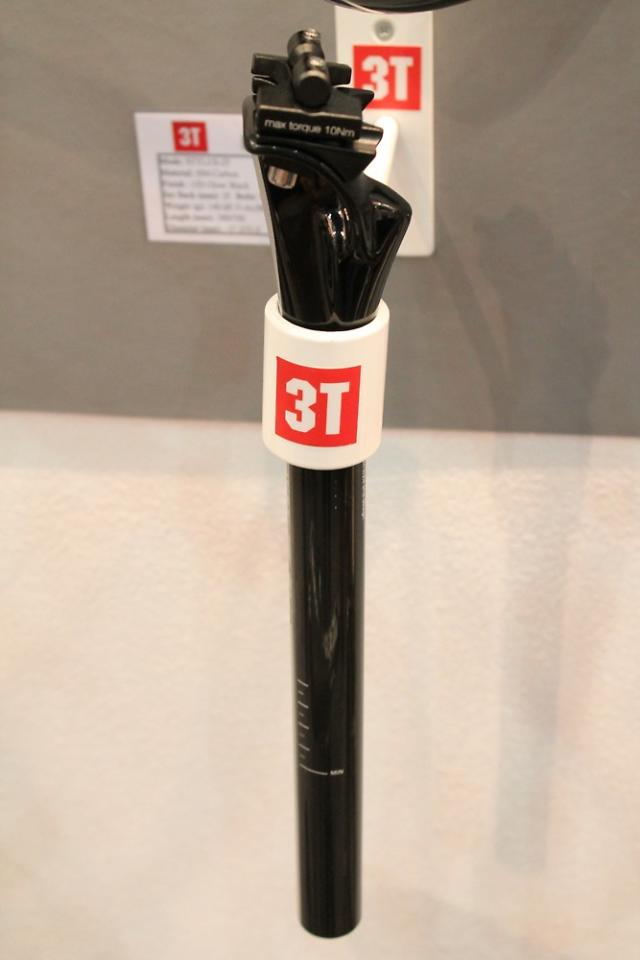 The Stylus uses a two-bolt clamp and, again, the Team and Limited models are carbon while the Pro version is alloy. The inline Stylus-0 Ltd, pictured here, is the lightest post that 3T do at a claimed 140g (31.6mm diameter, 280mm length). They’re all available in 27.2mm and 31.6mm diameters and various lengths 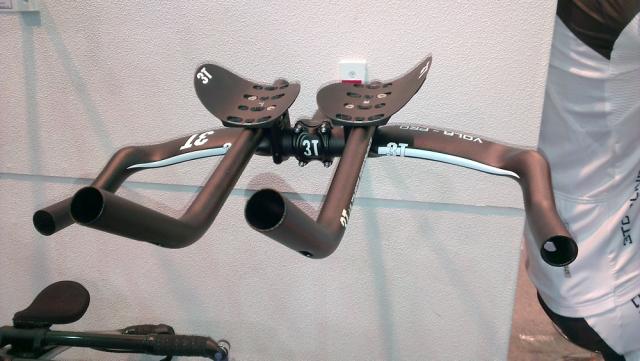 3T’s have a new Vola aero bar on the away for 2014, but it’s probably about nine months from being available. It’s made from hydroformed alloy, it’s compatible with electronic shift systems – both Shimano Di2 and Campag EPS – and it’s UCI compliant in that it fits within the 3:1 ratio rule. 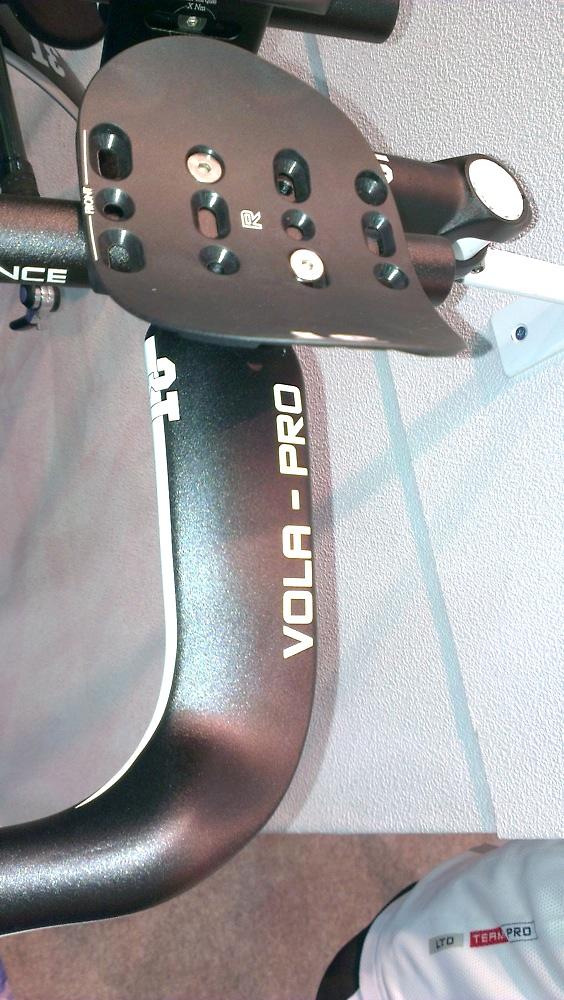 The pad and extension adjustments are separate – you can alter them independently – and you can raise them up together by adding spacers to fine-tune the height. Three different extension shapes will be available, as with the existing aero bars in the range: S-bend, ski-bend and straight.

We’ve no price yet but the Vola will be much cheaper than the existing carbon bars in the 3T range.

For more info on 3T’s range go to www.3tcycling.com or their UK importers www.i-ride.co.uk.