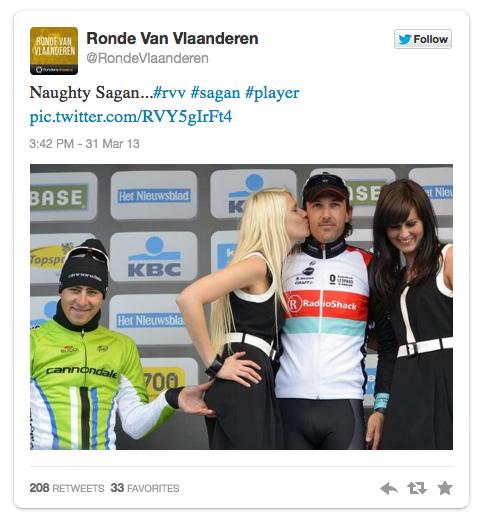 25-year-old says she was "frozen to the spot" and only the thought of millions watching helped her keep her composure...
by Simon_MacMichael

The podium girl groped by Peter Sagan following the Tour of Flanders on Sunday has described how she was “frozen to the spot” as the Slovak pinched her behind and how she fought to maintain her composure in front of a TV audience numbering in the millions.

Maja Leye, aged 25, who was planting the traditional kiss on the cheek of winner Fabian Cancellara when Sagan touched her, told Het Nieuwsblad: “Suddenly, I felt this hand. I hadn’t seen it coming because I had my back to him. I understood quickly what had happened. I was frozen to the spot.”

Leye admitted that she fleetingly considered slapping the Cannondale rider, but believes that had she reacted, the situation would have gone from bad to worse.

“I really thought about it,” she revealed, adding: “I had to stay professional. If I had reacted, the incident would have escalated. There were millions of TV viewers in front of their screens.”

She told the newspaper that her boyfriend was none too pleased when he heard what had happened. “He didn’t appreciate it,” she said. “After the race, he received loads of text messages. Luckily, he stayed calm.”

While certainly not condoning Sagan’s behaviour, Leye, whose day job is working in the general secretariat of the Flanders Classics organisation, added that she had accepted his apology for the incident, with the newspaper saying that she will protect her rear in future.

Sagan has said that he will keep his hands to himself in future, and the opportunity to prove good to his word may present itself sooner rather than later – Leye, who only this year started taking to the podium, will be on duty tomorrow at the Scheldeprijs, and again next Wednesday in the Brabantse Pijl, which the Slovak is racing.

The incident has prompted a debate in Belgium and elsewhere about the role of podium girls, with some going so far as to say that behaviour of the type Sagan displayed was understood by the women involved to be simply a case of high jinks that are part and parcel of their role; Leye's comments suggest very strongly that isn't the case.