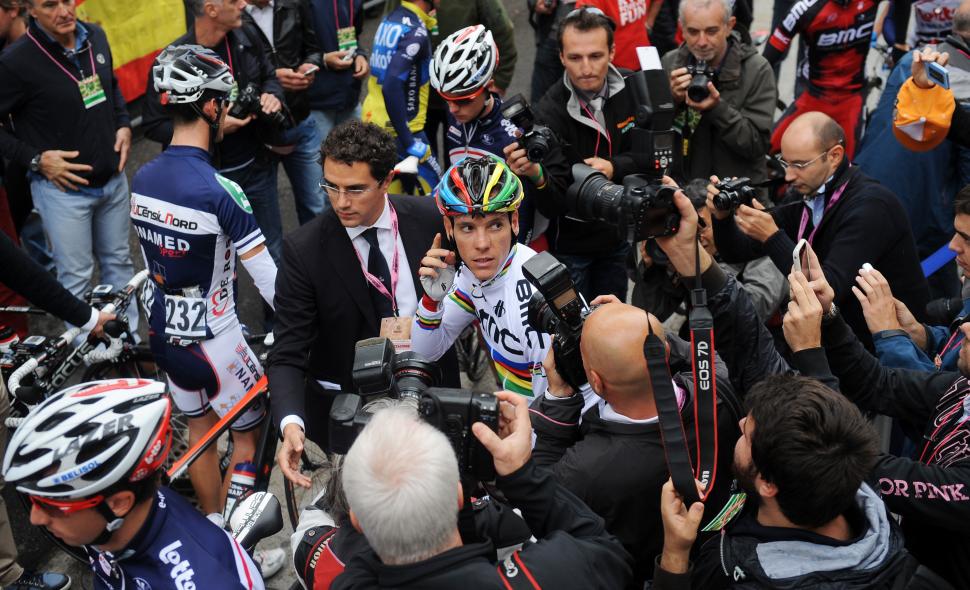 Cold keeps world champion out, while Phinney doesn't want to aggravate knee injury ahead of Paris-Roubaix...
by Simon_MacMichael

World champion Philippe Gilbert and BMC Racing team mate Taylor Phinney are both out of Sunday's Tour of Flanders. Their places will be taken by British rider Adam Blythe and the Belgian, Klaas Lodewyck.

Gilbert, third in both 2009 and 2010, picked up a cold at Paris-Nice earlier this month that he hasn't been able to shake off, while Phinney reported pain above his right knee follwoing last week's Gent-Wevelgem, where he finished in 41st place.

In a statement released this afternoon, BMC directeur sportif John Lelangue said: "We still have a good team with guys like Thor Hushovd and Greg Van Avermaet, who are our main leaders.

"But we have also seen in E3-Harelbeke that Daniel Oss is very strong. And we have a good back-up team with Marcus Burghardt, Manuel Quinziato  and Michael Schär and two teammates in Blythe and Lodewyck who were already prepared to race. So we are still confident that we will be there in the final."

Two years ago, Gilbert became only the second man ever to pull off the late-Spring hat-trick of Amstel Gold, Flèche Wallonne and Liège-Bastogne-Liège, and Ardennes Week remains his next big target.

"With my current condition, I know I cannot be successful at Flanders," he conceded.

"I want to give everything for the Ardennes classics, so I have decided to change my programme and go to Vuelta al Pais Vasco to prepare.

"I need a stage race where I can go hard on the climbs. It's always better for me to race than train because you can go much deeper in a race."

For Phinney, meanwhile, who finished seventh in Milan-San Remo earlier this month, his absence from Flanders is all about ensuring he is in peak condition for Paris-Roubaix a week on Sunday.

The 22-year-old American, whose proficiency over the pavé is confirmed by the fact he is the only rider to have won the Under-23 version of the race twice, said: "I'm confident if I stay at home in Italy and have a couple more days of recovery, I can be back 100 per cent for Paris-Roubaix.

"I could probably push through the injury but I wouldn't be at my best. I would have to ride conservatively and that's not the right position I want to be in for the team," he added.