There's so much stuff to see at Eurobike that your eyes can't take it all in, even the bits you do manage to see. On our way round though we did bump into some new stuff, and in amongst the thousands of pics we brough back there's some interesting bits and bobs. We've had a sift, so here's a quick selection of new and shiny things that we'll be seeing in the next year.

We're continuing to go through the masses of pics (we haven't made it to the video footage yet and we're sure there's some gems in there) so when we find more new stuff we'll stick it up here, or comment on the photos to let you know what's going on. 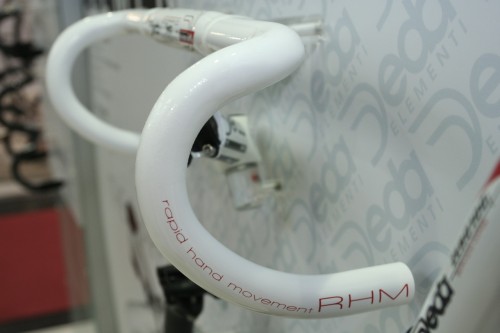 RHM stands for 'Rapid Hand Movement' and it refers to the sweep of the bars, a new shape for 2010. So what's changed? Well, in keeping with a few other manufacturers we saw Deda have reduced the drop a bit and extended the flat section of the drop so that it pokes back a bit further. This, say Deda, allows you to move positions more quickly (hence the name) and gives you a more comfortable position on the drops, one that you'll use more often. We know plenty of people that swear by shallow drops and they're becoming more and more prevalent; expect to see these bars cropping up on 2010 bikes before too long. 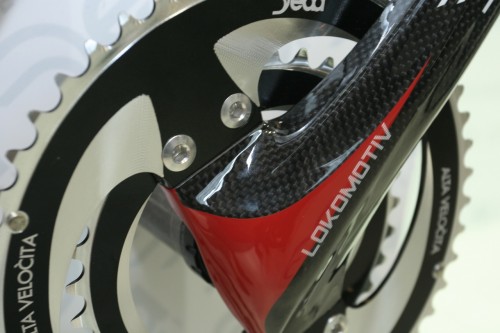 Deda were also showing off this chainset, the Locomotiv, in black and white. It's certainly a striking looking bit of kit with a beefy Carbon arm and two sets of two bolts on opposite sides of the crank. They were claiming this was for 'torque' reasons, we're suggesting it's for 'looks' reasons... 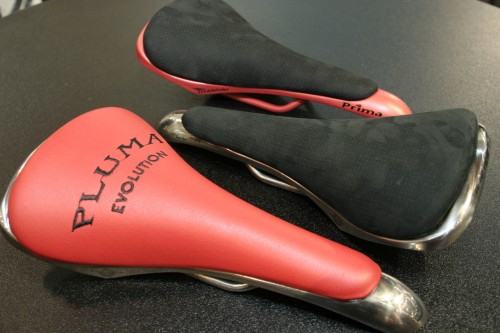 Ti-railed saddles were two-a-penny at Eurobike, but we could cound on the fingers of one, erm, finger the saddles with a full Ti base. And here it is, the Pluma. Actually it's not new, they've resurrected it from days of yore and are pumping them out again. Titanium would seem to be a good substrate for a saddle base. It's light, has a bit of spring and doesn't corrode. 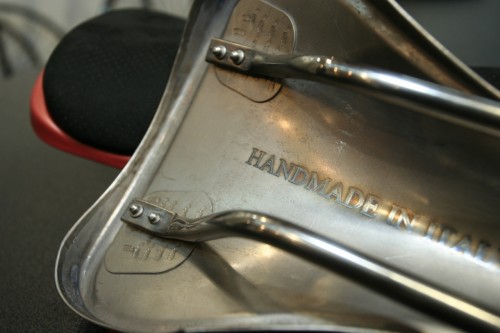 We didn't get to try one on a bike of course but it's a very pretty thing and we reckon it'd look great aboard your posh racer. It's light too, at about 160g. And hand made in Italy. 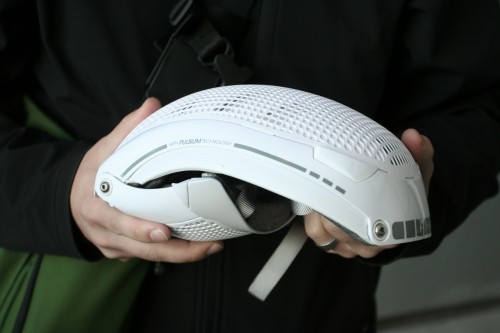 The last folding helmet we saw won a Eurobike award, which is one of the reasons said awards are viewed with derision by many: it was a bit of a dog's breakfast, to be honest. This hasn't deterred Dahon from having a go though, and the folder they've come up with is a bit more elegant, in as much as any urban-style helmet is elegant...

The helmet folds up to 50% of its orginal size: the sides slid in and the back folds forward to create a package that'll go in your courier bag quite easily. It feels a bit odd on the head but it's no better or worse than other non-folding urban lids I've tried. What exactly 'Pulsium Technology' is we're not sure, sounds a bit Star Trek. 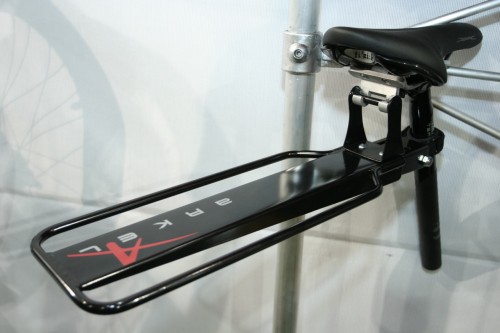 Nice bit of lateral thinking, this. Quick release racks are really handy but the main problem with them is that they tend to swivel around the mount point on the seatpost if you're not careful, and end up fouling your wheel. The Arkel rack fits onto the seatpost too, but there's a secondary mounting point on the seat rails that takes some of the weight and also stops the rack moving from side to side. 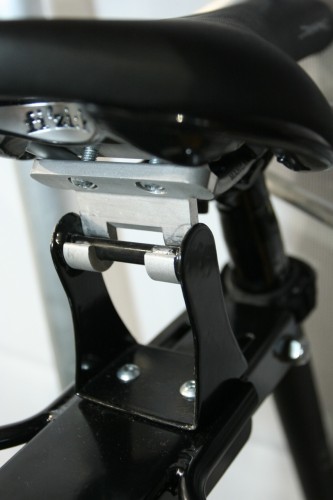 It's a really simple solution and one that makes the whole rack a lot sturdier. The one they were showing didn't have side rails though, let's hope that's in the pipeline... 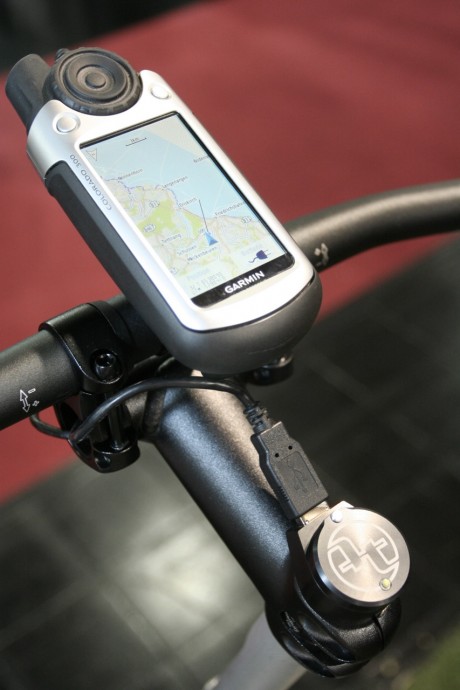 Smart thinking too from Tout Terrain, who were showing off possibly the tidiest USB charger at the show – and there were a few. Running from a hub dynamo, all the electronic gubbins is hidden in the seat tube, and all you see is a top cap with a USB port. The cap rotates as an on/off switch; even when it's off there's a capacitor in the circuit that fools your GPS into thinking it's still receiving powere so it doesn't go into hibernation when you stop. It's designed for touring with a GPS but there's no reason why you couldn't plug your phone in on your commute. 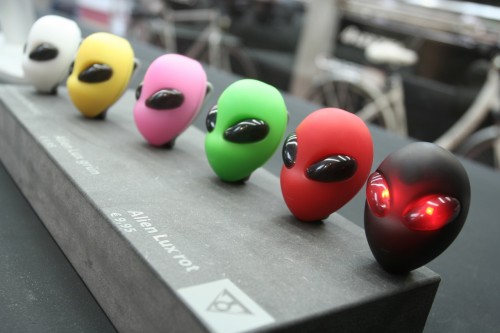 Okay they're not a technological marvel but they are pretty cute... 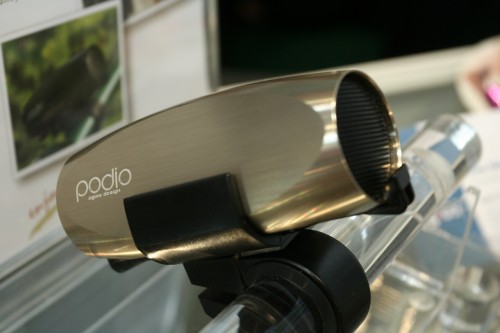 Bike audio wasn't quite the trend it was last year but there were still some players wit, erm, players. Podio had both the unit shown, with a built-in MP3 player in the back, and also a battery powered speaker you could plug your iPod into. The sound quality wasn't bad in a fairly noist show, although you'd definitely struggle to hear your emo/funk/opera on the mean streets of a big city. 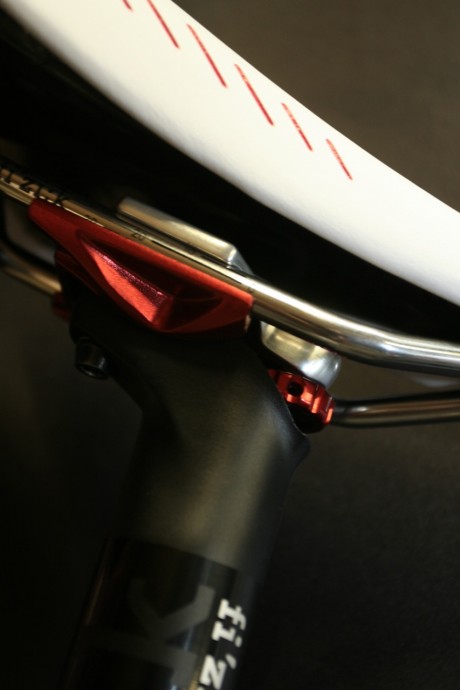 Fizik were showing off the Cyrano deatpost, the first 'post they've done. There's no magic or trickery, but it does look like a nice bit of kit. The head is shaped to allow easy mounting of your saddle, then there's a thumbscrew that you tighten to hold everything in pace before you firm it all up with the allen key. The base is cut at an angle which 'allows easy insertion' (missus) and there's a rubber bung which serves the dual purpose of keeping grime out of your frame and letting you know your saddle height setting should you need to take your seatpost out. 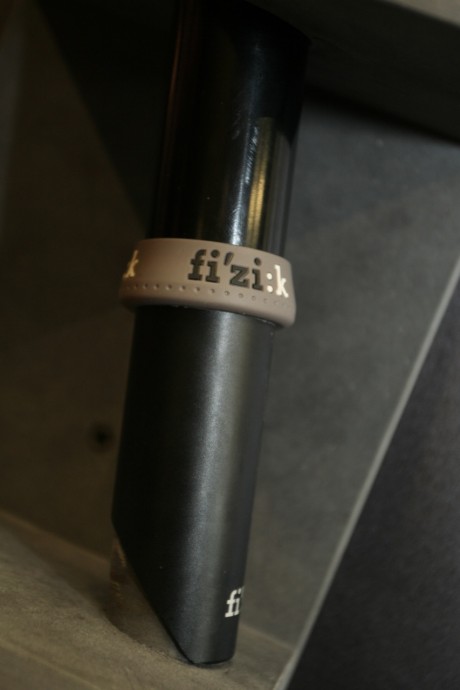