We popped along to Fisher Expo 2013, the annual press and dealer show put on by Fisher Outdoor Leisure to show off the latest products from brands such as SRAM, Zipp, Vittoria, Masterlock, DZR, Carrera and Look and of course their own Eastway bike range which we looked at yesterday. There was plenty to see. So here's our pick of the best bits. 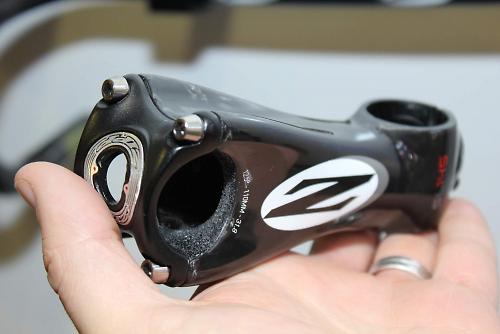 This is the Zipp SL145 stem that young Mark Cavendish is riding this season, now that he’s joined Quickstep. The team is sponsored by SRAM and the deal extends to them using Zipp wheels and bars, stems and handlebars. (We'll definitely be trying to get a look at his race bike to see if he's actually riding this set-up or is still discretely slipping on the Pro stem and bar combo that bears his name and which he helped design.) 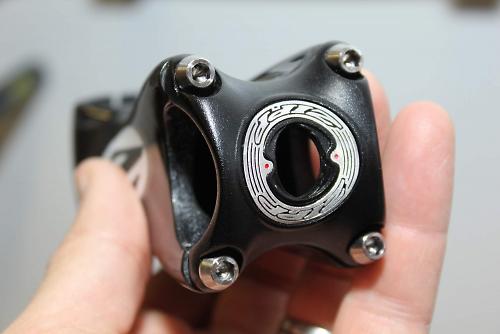 Zipp say the stem is their stiffest and yet weighs just 135g for a 100mm due to the full carbon construction. It’s available in lengths from 80 to 130mm with a +/- 12 degree angle. 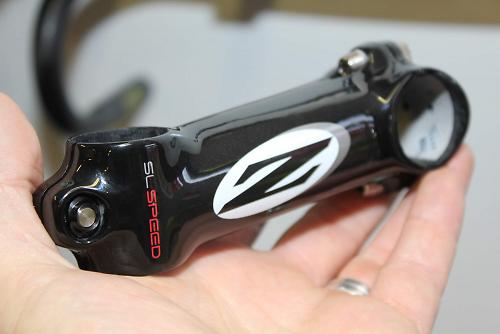 For climbers this here is the SLSpeed, which weighs a measly 102g for a 100mm stem. It has a carbon fibre main shaft and reverse bolts that thead directly into the faceplate to save weight, and the middle section is titanium which the bolts thread into for a very secure setup. 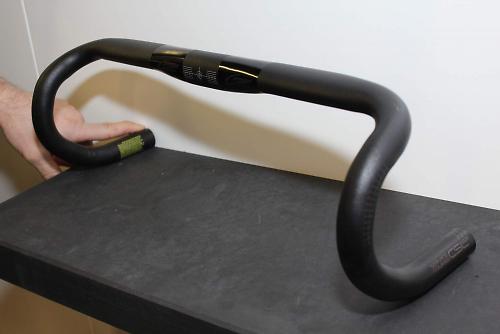 While Zipp do some very nice carbon fibre bars and stems, they also do a fine aluminium handlebar. This is the Service Course CSL SSR, which has a pro-approved round bend and the SSR in the name stands for Super Short Reach. It’s made from Zipp’s proprietary ZTL-71 alloy and weighs 290g. A lot of pros, Cav for one, opt for a combination of aluminium bar and carbon stem for maximum stiffness. 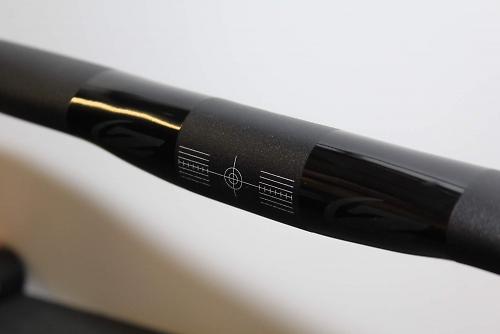 Another reason the pros go for alu over carbon is that there’s very little weight saving in carbon handlebars and with bike builds easily troubling the UCI weight limit a few grams isn’t a concern. Aluminium bars are very tough and withstand the rough and tumble pro life of being dropped and crashed, and are generally stiffer than their carbon counterparts. 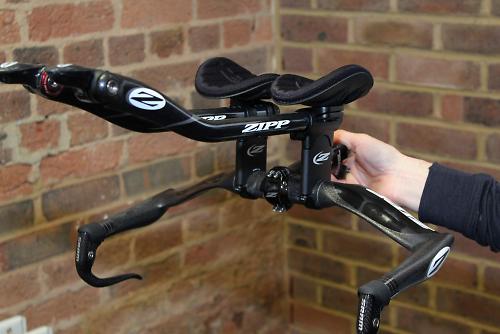 No sign of Zipp’s new Stealth aero bar, it’s not in stock yet, it’s so new. They had this, the VukaBull, though. The base bar is made from carbon fibre and all the attachments are aluminium. 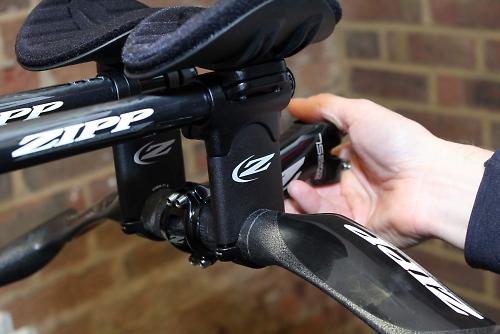 It comes with the option to use three different height stacks to tune your position. We revealed details of Zipp’s new 60 wheelset a while ago. It’s their most affordable aero wheel to date, and combines an aluminium rim construction - so you get a an alu braking surface - and dimpled carbon fairing with Zipp’s toroidal profile. 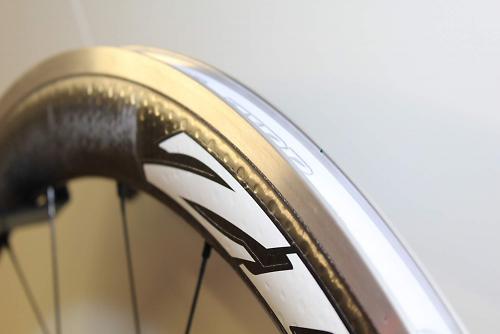 Weight for a pair is 1820g, putting them in the same ballpark as similar wheelsets from other brands. That breaks down as 850g for the front and 970g for the rear. The freehub is 10-speed and 11-speed compatible. External nipples allow for easy wheel tuning. They cost £1,200. 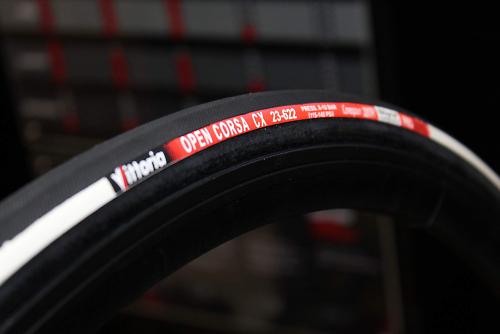 Fisher have added Vittoria to their portfolio of brands, but they’re not exclusive to Fishers, Chicken Cycles also distribute them. It's a situation that's not that unusual in the bike trade - particuarly with tyres, don't ask us why. Anyway, Vittoria’s Corsa CX is their top-end tyre and uses a new ISOgrip tread compound that is claimed to increase the tyres grip without any reduction on the rolling speed. How much more grip the tyre offers we weren’t able to ascertain, it’s just more. The tyre uses the same 320 TPI (threads per inch) construction that was introduced a year or so ago, and gives the tyre its incredible suppleness. Like most of the company’s range, the Corsa CX is available in tubular or clincher.

Another new tyre which unfortunately wasn’t available to be photographed is the Corsa SL. While it uses a very similar construction and 320 TPI carcass as the whereas the CX has a file tread, the Corsa SL has a very smooth tread. It’s claimed to be much faster as a result. 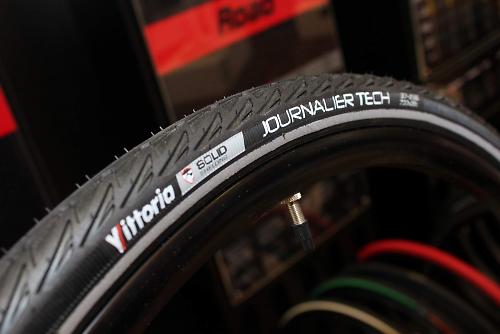 A brand new tyre we were able to photograph is the Journalier. It’s designed for everyday commuters and has a Solid Shielding anti-puncture belt under the tread and a smooth central tread section for fast rolling speeds. IT’s available in 26in and two 700c sizes, 35 and 38mm. Weight for the 35mm example is a claimed 730g. The Journalier Tech is a tougher version with a heavy-duty puncture protection and harder wearing tread compound. As a result it’s heavier at 880g for a 35mm model. Californian shoe brand DZR have been going a couple of years now, combining SPD compatible footwear with cool street style. For 2013 their new offering is the H2O, a shoe with a fully seam-sealed waterproof membrane. 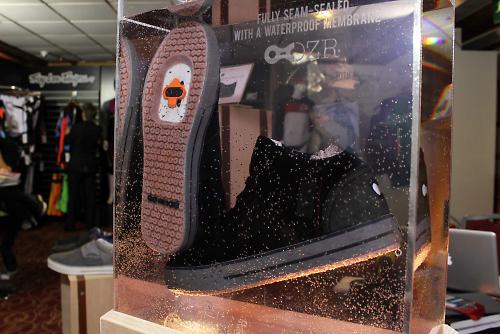 Usually adding the required holes for cleats in the sole of a shoe is an opportunity for water to get in, but DZR have designed a way around that. The sheep skin leather is also treated with a water resistant finish. They’re not promising to keep your feet dry if you go wading through a stream, but for riding in the rain and splashing through the occasional puddle on the way to the cafe/pub/cinema, they should be ideal. 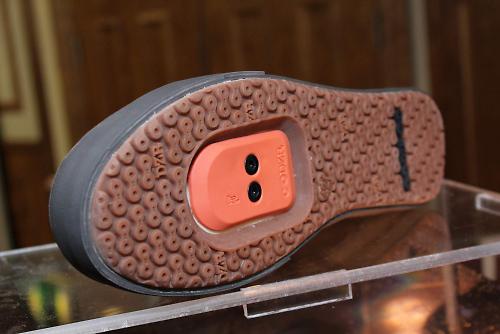 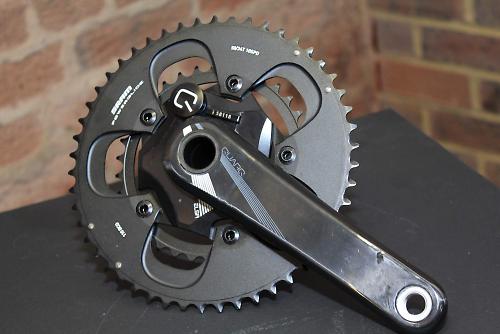 SRAM are going to be pushing their Quarq power meters a lot this year, following the release of the new Elsa, a top level product. It’s available with a SRAM Red crank arm or a non-series Quarq crank arm. Their Power Balance technology makes it easy to separate data from each leg so you can ensure you’re pushing equally hard with both legs. It does this not with strain gauges on both crank arms, but by knowing by the orientation of the cranks which leg you’re pushing down with. Everyone is doing them this year, handlebar mounts for Garmin GPS computers that place the unit out front of the bars. This is SRAM’s offering, the Quickview, which comes in any colour you like as long as you want black. 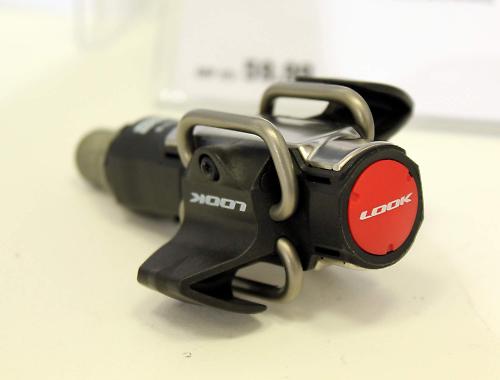 Look S-Track pedal is a brand new mountain bike clipless pedal that looks to be very versatile. IT offers a large pedal-cleat contact area and very neatly has a bolt-on plastic platform that converts it into a flat pedal. Dual-sided mountain bike pedals are very good for commuting and touring, with the convenience of have a recessed cleat in the shoe that makes walking a load easier, as well as easier clipping in. 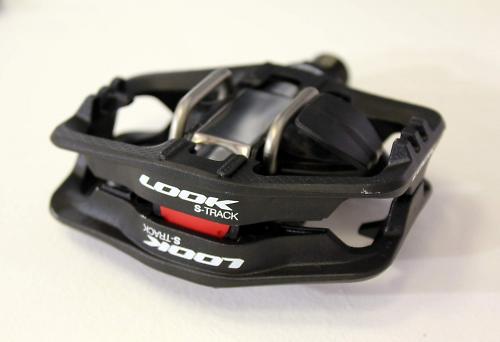 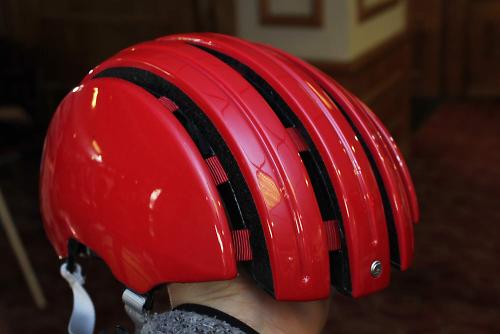 This is Carrera’s Folding helmet. First things first, it’s not a folding helmet in the sense that is folds away, it doesn’t really do that. What it does do is compress quite a bit, so it’s easier to store away or fit in your bag when you’re not cycling. The design is very unique and certainly lends it a standout look. I can’t decide if I like it or not. 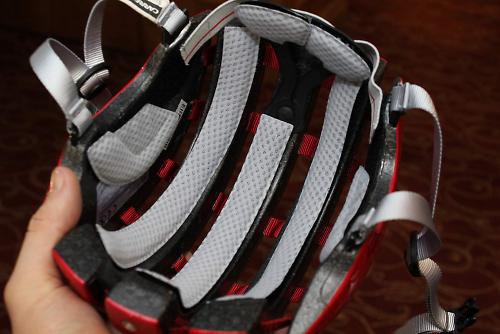 A benefit of its unique design, so they tell us, is that it’s scores very well in the ventilation stacks, and there’s no arguing that it clearly looks to have clear channels for air to rush in and over the head. There’s also less helmet in contact with the head, especially around the front where there isn’t the usual ‘headband’ of most typical helmet designs. 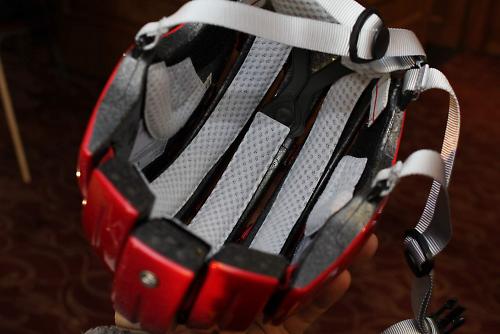 And in safety terms it meets all safety standards, so no problems there. It’s available now and in seven colours. Carrera tell us it’s mainly aimed at cycle commuters and city cyclists, in preference to the popularity of skater inspired lids and cheap mountain bike helmets. Talking of the price, it’ll cost £59.99 and it weighs 260g. 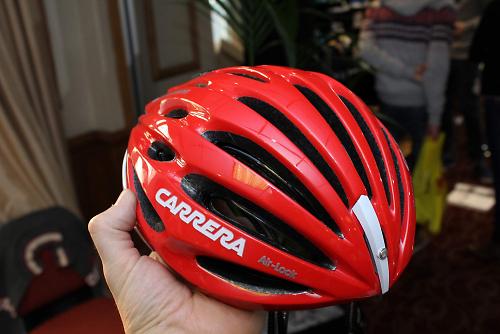 Another new lid on the way, but that is still in development, is the Nitro. It’s been developed with Katusha - Carrera sponsor the team with helmets and eyewear - and has the novel ‘active vent system’ that is designed to imitate the current trend for aero helmet fairings (like the one Cavendish wore in the world champs). 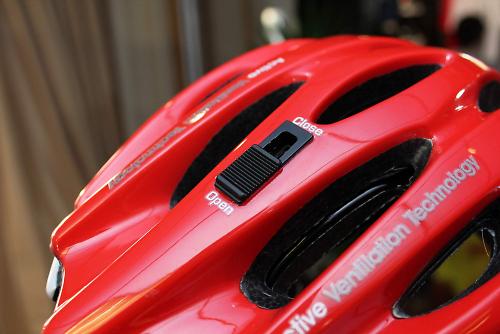 A slider at the rear of the helmet moves a clear plastic sleeve, sandwiched between the helmet core and outer, and blocks all the front vents. It weighs 260g and will cost £150 when it’s available. They’ve been in a windtunnel with it and reckon it will save 1 second a kilometre when cycling at 40 kph. 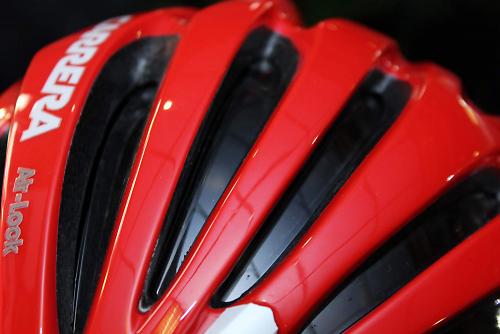 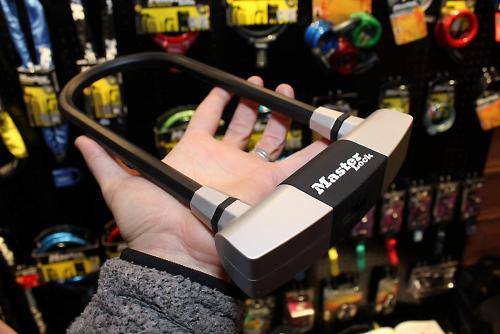 Masterlock introduce their most expensive lock to date, the new £100 D-Lock with an octagonal shackle. 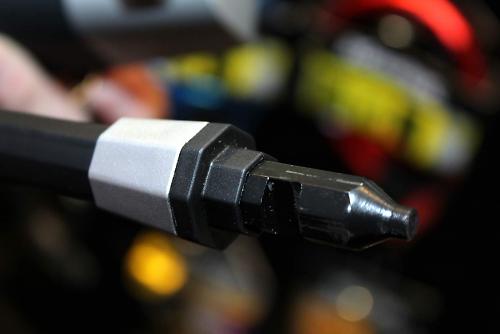 Even if the thief manages to cut through one side of the lock, they won’t be able to twist it around and release the bike, they would have to cut through both sides. That won’t be easy though as it’s made from coated hardened steel. 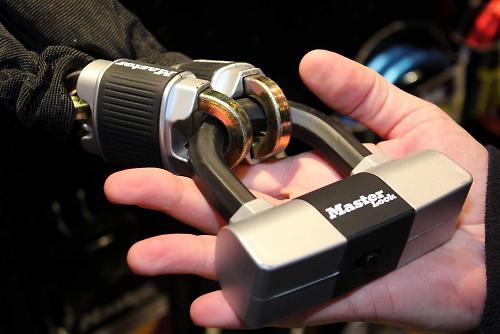 A £115 chain lock with a mini version of the octagonal D-Lock will be available too. Both come with a lifetime warranty against mechanical failure.