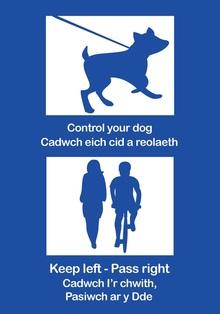 Cyclists, dog owners, and pedestrians reminded of their responsibilities… and Sustrans calls for safer routes too
by Simon_MacMichael

The issue of conflict between cyclist, pedestrians, and dog walkers has once again been highlighted by an incident on the Taff Trail in Cardiff, which left a 10-month-old Boxer puppy named Buster with a broken leg. The news comes as Cardiff City Council plans to put on training courses for new cyclists inspired to ride by Great Britain’s success at London 2012, with Sustrans Cymru calling for safer routes to be made available for cyclists as more residents take to two wheels for their commute.

From a report of the incident by BBC News Wales, it appears that both Buster’s owner and the cyclist involved may share some responsibility for the unfortunate pup’s injuries, the former for not keeping him under control – the article doesn’t say whether or not he was on a leash, only that he ran into the cyclist’s path – the latter, perhaps, for going too fast.

Both issues are addressed in the Taff Trail Code of Conduct, which Sustrans Cymru issued in 2011 in response to a number of incidents involving cyclists, walkers and dog owners on the 55-mile route, which at its southern end has become a popular route for Cardiff commuters riding from places such as Llandaff into the city centre.

The Taff Trail Code reinforces that “pedestrians have a priority over all other users on shared pathways,” and that “cyclists are asked to ride at a speed and in a manner that is appropriate to the conditions of the path.”

It adds that “pedestrians are asked to keep their dogs under control and preferably on a reasonably short lead in busy areas.”

As road.cc user and local cyclist Chris Humphreys told us, short of the cyclist having a bike computer or the dog wielding a radar speed gun, there is little way of knowing exactly how fast the rider was going – although he adds that given the condition of the path, “you’d be hard pushed to top 15 mph,” and in any event, there are plenty of fields adjacent to the path where dogs can be safely exercised.

The dog’s owner, Mark Dickenson, who faced a £2,600 vet’s bill to repair Buster’s leg, told BBC Wales: "I'm a cyclist myself and cycle to work in Caerphilly every day so I'm not against bikes on the Taff Trail.

"But the Taff Trail is a shared path and is there for cyclists, dog walkers and walkers so cyclists shouldn't go as fast as they do.

"The vet thought Buster's injuries had been caused by a motorcyclist because they were so bad."

He didn’t explain – or wasn’t asked – how Buster had been able to run into the cyclist’s path in the first place.

Matt Hemsley from Sustrans Cardiff told road.cc that while the Taff Trail is a superb facility and especially popular with commuting cyclists, dog walkers and bike riders alike needed to share it responsibly with others, and that those on two wheels shouldn’t ride too fast while those with four-legged friends need to keep them under control.

He had also been quoted in the BBC News article, although he told us that they had not mentioned the incident involving Buster but instead asked him for Sustrans Cymru’s views on the cycle training Cardiff City Council is introducing, according to the BBC, because “It wants to tackle problems such as cyclists riding too fast, on pavements and going through red lights.”

Hemsley told road.cc: “Shared use paths are of great benefit to the entire community, but it’s important that all users are respectful of each other, which is why Sustrans promotes a code of conduct. If you want to cycle fast, shared-use paths are not the place.

“We’re pleased that the council is willing to offer more cycle training, which can be especially helpful for people returning to cycling who may be inexperienced at cycling on-road, but it’s important we also have more safe routes away from traffic – such as the Taff Trail – otherwise many people who might want to take up cycling may end up being put off.

"As the Welsh Government prepares to launch the Active Travel Bill, now is the perfect time to start assessing where those safe routes should be.”

In 2010, the Taff Trail was the subject of Penarth cyclist Steve Castle's winning entry in Sustrans' My Cycle Network competition. His film certainly highlights the attraction of the route for commuters.