This is the Stoemper Taylor, a frame hand built in Oregon and born for the roads of Belgium. Stoemper, by the way, is a Flemish term for someone who mashes a big gear… who'd have thought.

You might not have heard of Stoemper before, but you might have heard of their crazy Stoepid Week last spring? Founders Todd Gardner and David Alvarez and a few buddies, six in tota,l attempted to put their bikes through the ultimate test, of riding the routes of five spring classics (Flanders, Paris-Roubaix, LBL, Amstel Gold and Gent Wevelgem in seven days. That's a distance of 785 miles, in one week, over some of the roughest roads and steepest hills in the area.

Sounds a lot of fun to me and it got a lot of bike media attention. And the bikes? Well they passed with flying colours. And so the brand was launched. A cunning, and impressive way to get yourself noticed you'd have to agree. That was before my time on roadcc so I first heard of Stoemper when I picked up a copy of Bicycling magazine at an airport on my way home from a product launch in the US last year. I wondered if they would make it to the UK. I didn’t have to wait too long for the answer, they now have a distributor in place. And this is the very first Stoemper to arrive over here, making this an exclusive first look. The guys behind Stoemper all come from a racing background, so no surprise that each of the four frames they build is made with racing in mind. There’s currently four models, consisting of two cyclocross racers (in steel and aluminium), an aluminium road race frame and this here steel Taylor. The Taylor is designed to be a tough frame built to withstand the abuse of cobbles, poor road surfaces and aggressive riding. to be raced or just ridden hard. It’s made from True Temper S3 tubes. S3 stands for Super Strength Steel, and uses True Temper's proprietary heat-treating process. With the increased strength of the steel, the tubes can be thinner, resulting in a lighter frame. The tubes are TIG-welded with hand-bent seatstays and a custom machined head tube. And neat cowled dropouts and tapered chainstays. 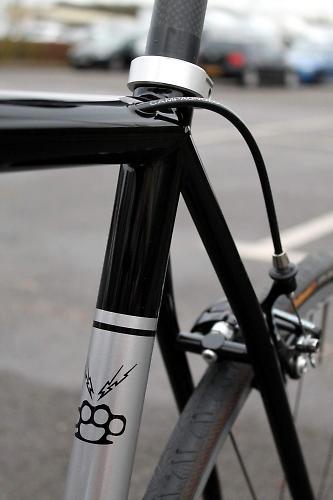 A frame costs £1,599 and with a custom painted Enve 1.0 fork £1,899. Prices include VAT and delivery from Oregon. They offer a choice of two colours, for the frame and the graphics. They follow tradtitional geometry and offer 11 sizes, and if that isn't good enough they can do custom geometry. And because each and every frame is made by Todd's own hands, they can do extras like an integrated seat mast and internal cable routing. Waiting time for is around  8-10 weeks. I think it’s fair to say there is an air of excitement around the resurgence of steel over the last couple of years. Granted it’s never really gone away, but more people seem to be considering its virtues for their next build. There's a thriving frame building scene in Oregon, with particular focus in cycling-mad Portland.

And it's steel that the frame builders are working with. They're treated steel not with sepia tinted spectacles but with as a modern material, and challenging to a degree the dominance of carbon and to a lesser extent aluminium. For example, we tested the Tonic Fabrication Vanishing Point, a handmade steel frame from Portland, a couple of years ago and were impressed with the ride. There’s even a professional team built around a steel bike this year.

So I look forward to riding the Taylor. Which I’ll get the chance at the Tour of Flanders this year. More on that at a later point.