Competitors will ride more than 2,000 miles unassisted from London to Istanbul
by Mat Brett

Riders from all over Europe will ride across the continent from London to the Bosphorus Strait later this year in the QuickEnergy Transcontinental race, with the fastest expected to complete the challenge inside two weeks.

The race will start in London on 2 August and riders will choose which roads to take and what bushes to sleep in, but ‘strategically placed’ checkpoints will set a minimum distance of around 2,000 miles and enforce some altitude gain. The emphasis is on fast and light so those who leave their spare pants at home will have a clear advantage.

QuickEnergy are presenting the race and it will be staged by adventure travel company The Adventurists in partnership with the 2012 round the world bicycle race winner Mike Hall, who will be race director.

Mike was backed by QuickEnergy, an energy supplement brand, on his round the world race and is also a veteran of the Mongol Rally and the Rickshaw Run, both overland adventures created and run by The Adventurists. The collaboration between the three, therefore, was a natural next step.

“We all believe in the need for a seat of the pants race with no handholding,” says Mike. “Together we can deliver something beautifully hard at the pointy end and an unconstrained adventure at the other end, yet with the right level of organisation and coverage where it counts.”

He believes that the format will give a very similar experience to the World Cycle Race “but a bit shorter so more people can fit it into real life.” 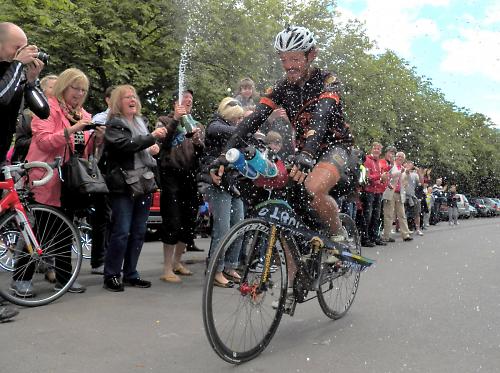 The adventure is suited to those on a budget. Low cost airlines operate between Istanbul, London and the rest of Europe and the entry fee of £95 is less than some weekend events, so you get far more suffering for your pound.

Mike sees this as part of the appeal of an unsupported racing format for riders and the audience who will be able to watch the race unfold online with live tracking and regular updates.

“We want people to be able to grab a bike and just go,” he says. “No support vehicles, no teams of helpers and no costly logistics or exorbitant entry fees. Just a bike, a map and a vague sense of direction will do, Plus, living like a hobo is much faster than staying in hotels.”

Rider places will be limited and entrants will be invited to attend preparation workshops at The Adventurists’ HQ in the lead up to the event. Entries will open shortly via www.transcontinentalrace.com and interested riders can sign up to receive race entry information first on the website.