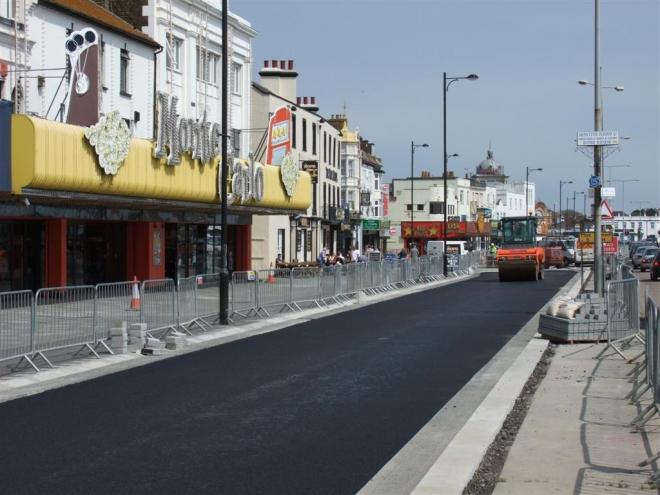 Was walking in town's controverisal 'shared space' for cyclists and pedestrians...
by Sarah Barth

A teenage girl is fighting for life in hospital after she was hit by a cyclist on Southend's promenade, a shared pedestrian and cyclist path along the beach front.

The 16 year old from Benfleet in Essex was taken to Southend Hospital in a life-threatening condition following the collision just after 9.45pm last night in Marine Parade.

She has now been transferred to Queens Hospital, in Romford, with a serious head injury.

The cyclist, a man in his 20s from Leigh, was uninjured.

The cycle path has been controversial from its beginnings. It was part of a £7.6 million scheme called City Beach, created in 2011.

Instead of providing a separate cycle lane, cyclists share the promenade with pedestrians.

According to a report in the Southend Standard at the time it was built, the council was keen that the facility not be used for cycling quickly.

But it was not welcomed by all in the area.

Carmel Bishop, aged 42 from Bishopsteignton, Shoebury, said before it was built: “You used to get serious problems, particularly in Chalkwell during busy periods when pedestrians were dodging cyclists.

“It looks like we’re going back to that,” she added.

Graham Pearl from local cycle club Southend Wheelers, who is also a Sustrans Bike-It officer, said at the time that he was in favour of it: “Anything that allows us to cycle in more places is beneficial.

“When it comes to shared use, it’s all about respect for each other, both cyclists and pedestrians.”