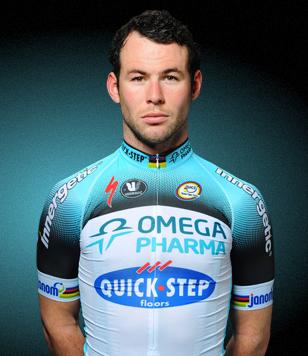 Mark Cavendish has got his career with Omega Pharma-Quick Step off to a cracking start by winning his debut race, Stage 1 of the Tour de San Luis in Argentina. The former world champion outsprinted Sacha Modolo of Bardiani Valvole-CSF Inox to take the 164km stage from San Luis to Villa Mercedes. Alessandro Petacchi of Lampre-Merida was third.

The latter denied Cavendish the points classification in the 2010 Tour de France and also in the mix in the finale were two other men who have beaten him to the green jersey, BMC Racing’s Thor Hushovd and Peter Sagan of Cannondale.

Cavendish’s Omega Pharma-Quick Step colleagues had ridden hard to reel in a four-man breakaway to help set up the bunch sprint and as he has done when winning races for his previous teams, HTC Highroad and Team Sky, the first thing he did after the stage was acknowledge their contribution.

"The team did a great job for me today," reflected Cavendish, quoted on his team’s website. "We were the first team to start riding, with Martin Velits at the beginning, we were present at the front the whole day.

“We got help from other teams too, the sprinter teams, but the guys just rode so strong and stayed with me the whole day. It is so nice to have a team with me that is 100 per cent committed. I'm so, so proud of the guys today.

"All the teams are fresh and motivated, so it was real, real chaos," he went on. "It was hard to stay together. I had a few guys with me, and in the finishing straight, within 1 kilometre or 400 meters it was just kind of about staying at the front.

“It was hard with a bit of a dip into the finish and nothing really marking 100 meters or 200 meters, so I just kind of jumped at 250 meters. I knew when I jumped I'd have a good shot at it, even though there was some wind.

“It feels good to be fresh with a good bunch of guys and on such a fast bike. The guys really looked after me, so I had 100 per cent energy at the finish. I'm so happy I could win.

"The pressure is now off, but we will continue to try and get more results for the team and try to set up our lead out as best we can," Cavendish added. "We also have a few guys for the GC here, so we will try to be present for both stage hunting and a good place in the GC."

Omega Pharma-Quick Step dedicated today’s win to Tom Boonen, who is recovering from an operation yesterday after contracting a septic infection in his left elbow.

The infection was the result of a cut sustained during an apparently innocuous fall from his mountain bike while on a training ride through woods near his home in Belgium the Sunday before last.