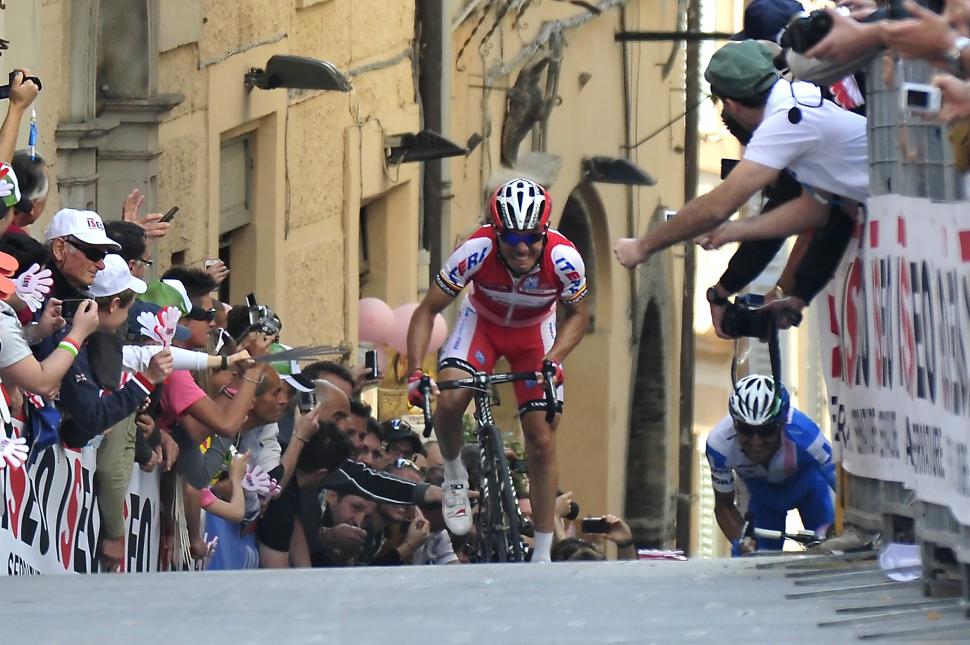 Move not a surprise - team owner Makarov chairs the federation - but could it herald struggle for control of UCI?
by Simon_MacMichael

The Russian Cycling Federation, the FVSR, has thrown its weight behind Katusha, told this week that it had not secured a UCI WorldTour licence in a decision that came as a complete shock to the cycling world. Coming at a time when the UCI has opened itself and the sport to unprecedented scrutiny, the decision not to award Katusha a licence could mark the start of a battle to determine who will run the UCI.

The support of the Russian federation to back Katusha is in itself hardly a surprise – after all, Katusha owner, energy billionaire Igor Makarov, also happens to be president of the Russian Cycling Federation. But he’s also a member of the UCI management committee, and has been reported in the past as having ambitions to succeed Pat McQuaid as UCI president.

Today’s strongly worded statement from the Russian federation (see below), including the assertion that it “will defend the interests of the team meaning Russian cycling in general” could therefore signal the opening salvo in a struggle for power at the top of the sport.

For its part, Katusha has already said that its lawyers are studying the decision of the UCI licence commission, and it wouldn’t be a surprise if the team, which insists that it had been given the impression that it had satisfied the financial criteria, the grounds on which it was denied a licence, sought to challenge it through the Court of Arbitration for Sport.

The clock is ticking though – the Tour Down Under starts on 20 January, and with it, the 2013 WorldTour season – and if any appeal from Katusha were successful, there are other implications to be considered, such as the presence of 19 WorldTour teams with guaranteed entry to the sport’s biggest races meaning fewer wild card spots in races such as the Tour de France for lower ranked teams.

As things stand at the moment, there is not even a guarantee that Katusha, currently the number-two ranked team in the world, will even secure second division UCI Professional Continental status – and if it doesn’t, the situation between the Russian federation and the UCI can only escalate.

There’s also the effect on staff and riders to consider, and other leading teams are bound to be watching the situation closely and will try and tempt away riders such as Jouaquim Rodrigiuez, who topped this year’s UCI WorldTour ranking, should it look like the situation won’t be resolved in Katusha’s favour.

That's if the riders, whose contracts will provide for a change in the team's circumstances, don't walk first - Katusha's other star rider, Dennis Menchov, will be experiencing a case of deja vu having only joined the team after his former Geox-TMC team collapsed after sponsorship was withdrawn in the middle of the licensing process 12 months ago.

The big unknown at the moment remains just why a team with an owner who has the deepest pockets on cycling, not to mention the world’s number one rider, fell down on the financial aspect when others, such as Euskaltel-Euskadi, squeezed through despite a shoestring budget that in the Basque team’s case has resulted in November salaries reportedly going unpaid while a dispute continues over transfer of ownership of team buses to its new management company.

Many have pointed out that it’s a ludicrous situation that on the eve of the a new season, one of the sport’s leading teams should be left in the dark about exactly where they will be competing the following season – imagine if Arsenal, Chelsea and Manchester United were only told in July that they were cleared to kick off the FA Premier League season in August, while Manchester City were told they hadn’t met the criteria, and would have to reapply for a place in the Championship instead – which they might not even get.

The Katusha situation is certainly a mess, and one that in all probability has been waiting to happen due to the fact that the licensing process takes place within the increasingly small window of the close season. How it is resolved may well play a part in shaping the future direction of the sport.

A press-release containing a refusal for the given until 2015 Team Katusha World Tour license registration has been published on the International Cycling Union (UCI) official web site on December 10, 2012. To this moment no one from the team management, sponsors or the Russian Cycling Federation has been given official explications from the UCI.

Team Katusha is the only Russian professional cycling team, where the majority of riders are Russian citizens. Their performances in the World Tour races bring points to the national rating and allows a possibility for our athletes to receive a quota for participation in the World and European Championships, and of course the Olympic games. Besides this Team Katusha is a part of the Russian Global Cycling Project (RGCP) which is realized with the direct participation of the Russian Cycling Federation.

In 2012 Katusha became one of the best professional cycling teams in the world, having finished the last season on the 2nd place in the UCI World Tour ranking and having scored 29 victories. Besides, Katusha’s leader Joaquim Rodriguez took the 1st place in the UCI World Tour individual ranking, becoming the best cyclist of the world and a vivid example for young Russian athletes who are only in the beginning of their cycling career.

The absence of the World Tour professional license for Katusha Team will lead to a reduction of chances of Russia to perform and win in competitions of the highest level. Also this will lead to a decrease of popularity of cycling as a sport and consequently to decrease of cyclists quantity in Russia. This is exactly the opposite to what the Russian Cycling Federation headed by its president Igor Makarov have been fighting for two years.

The total silence from UCI and absence of reasons for the Team Katusha 2013 professional license refusal completely undermines the image of the UCI, the organization, whose activity is supposed to be aimed at the development and promotion of cycling in the world, important part of which is the Russian professional cycling team Katusha.

The Russian Cycling Federation considers the actions of UCI regarding the concealment of team license refusal reasons completely discriminating and will defend the interests of the team meaning Russian cycling in general.