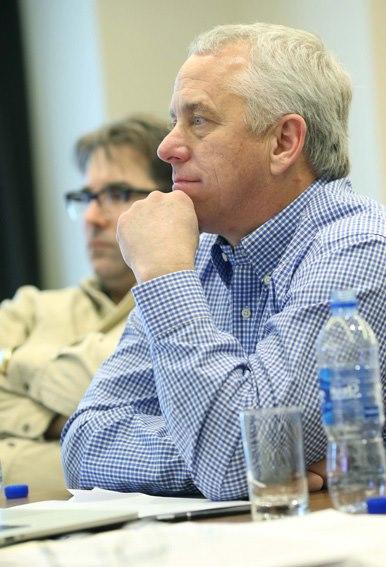 London meeting ends with calls for UCI chiefs to step down and launch of blueprint for sport's future...
by Simon_MacMichael

The Change Cycling Now summit in London has concluded today with the publication of a ‘Charter of the Willing,’ a document described as providing a “road map for the future direction of competitive cycling.” Meanwhile, one of the summit’s most high-profile attendees, Greg LeMond, has said that he plans to stand for election as UCI president but only on an interim basis until someone can be found to fill the role on a permanent basis, should his candidacy prove successful.

The Charter of the Willing, the full text of which appears at the end of this article, calls for a Truth & Reconciliation Commission to be set up to enable cycling to make a completely clean break with the past, a truly independent commission to investigate the UCI and its management, anti-doping testing to be fully independent of the governing body and a compete shift in its culture.

In a press conference that followed the conclusion of the two-day summit, a clear theme was the lack of confidence in the UCI’s current leadership with Jaimie Fuller, chairman of compression clothing firm Skins, who convened the summit, calling on the governing body’s president Pat McQuaid and honorary president Hein Verbruggen, who presided over it during the years of Lance Armstrong’s dominance of the Tour de France, to resign immediately.

Clearly there is little prospect of that happening, but speaker after speaker gave a damning indictment of the men who head up the governing body. Fuller revealed that more than ten current riders had been invited to attend the summit, but fearful of repercussions from the UCI, had declined. He also raised strong concerns about whether the independent commission established by the UCI to examine its own role in the US Postal scandal is truly independent.

LeMond, twice world champion and a three-time winner of the Tour de France, citing what he described as a climate of fear among riders and teams, disclosed that in 2006 he had approached McQuaid to call for anti-doping to be made independent of the governing body, the response being that a couple of months later, he found himself being sued by it.

Eric Boyer, until this summer team manager of Cofidis told journalists that ahead of Lance Armstrong returning to the sport at the Tour Down Under in 2009, he had written to McQuaid in his capacity as then head of the professional teams’ association, the AIGCP, to ask why the American was being allowed back into the sport without having satisfied requirements over being available for testing for six months.

The UCI president’s reply, said Boyer, called his own credibility as head of the teams’ association into question, and to question why he was getting involved in the issue at all.

Dr Michael Ashenden, who devised and headed up the UCI’s biological passport programme before leaving in April after a dispute with the governing body after it tried to add a gagging clause to his contract to prevent him speaking to the media about his work while employed by UCI and for eight years after leaving, called for Change Cycling Now’s call for independent doping controls to be implemented immediately.

He said that if that happened, Grand Tour winners in 2013 would be free of the suspicion of having doped their way to victory.

His words echoed comments from Paul Kimmage, who maintained that a change of approach to testing would remove for once and for all the suspicion from some quarters that continues to surround successful riders, such as Tour de France champion Bradley Wiggins.

According to the Irish pro cyclist turned journalist, it’s the suspicion and cynicism caused by those who have doped their way to victory in the past that leads to the achievements of riders such as Wiggins being questioned, even if they are clean. Adopting Change Cycling Now’s manifesto, claims Kimmage, would go a long way towards eradicating such whispers.

Equally, however, there were calls for all riders, and the big names in particular, to fully embrace the fight against doping rather than make vague reference to the US Postal scandal that brought down Armstrong being something that belonged to a previous generation and that the sport is cleaner now.

It’s likely to be some time before we know whether the two-day meeting really marks the start of radical reform of the way the sport is run, or whether it will be recorded as a short-lived challenge to the current UCI leadership.

Certainly, those involved, while in many cases having strong reasons for perhaps looking for retribution against the UCI due to past run-ins with its leaders, are passionate about their commitment to trying to ensure a clean and credible future for the sport.

The potential game-changer might be if LeMond, who said that Change Cycling Now’s manifesto represented a final chance for the sport, were successful in getting himself elected as president of the governing body, a plan he outlined in an interview published this morning by French newspaper Le Monde.

In that interview, LeMond acknowledged that he might not be the best candidate for the job on a permanent basis, that he perhaps lacked the political acumen to become head of a sports governing body on a permanent basis, but he would be willing to take on such a role temporarily while someone of sufficient stature – he cited the name of former World Anti-Doping Agency president Dick Pound – were able to eventually replace him.

“If Pat McQuaid truly loved cycling as he claims to do,” said LeMond, “he’d have resigned already.”

Charter of the Willing

A road map for the future direction of competitive cycling

We have established this Charter to serve as common credo to be adopted amongst the members of the Union Cycliste Internationale (UCI), the World Anti‐Doping Agency (WADA), the National Anti‐Doping Authorities and the cycling community.

This Charter is our collective affirmation of the values, principles and steps that all relevant stakeholders should adopt, practice and collectively amplify for the future of competitive cycling.

We affirm the following:

A. The sport of cycling’s credibility and reputation has been harmed by the actions and inactions of the UCI, some cycling team management and staff and some of the riders.

B. Complicit acceptance of doping practices will have no place in cycling now or in the future.

D. In the process of discovering the truth, all parties need to look beyond the principles of ‘zero tolerance’. There is a need to accept and find every means to encourage parties to be totally open and transparent about the past without fear. The practise of ‘zero tolerance’ will maintain the code of silence, the omerta, due to fear of retribution and the sanction of severe penalties. We should not be afraid of the truth.

E. The transparency of the truth and reconciliation process will provide a sound basis upon which to learn the lessons of the past and design a fully collaborative anti‐doping model with all the stakeholders.

F. Once the sport of cycling has exposed the extent of past practises, dealt with the consequences and applied a period of amnesty, it must move on in an environment where doping practises are not tolerated.

The TRC should receive information and testimony from riders, team staff, sporting bodies and other interested parties concerning doping practises and the administration of doping products within the professional peloton. The TRC should gather information, bear witness to, record and conduct hearings to allow recognition of the past.

The TRC must be independent. All teams, riders and staff should be directly instructed by the President of the UCI to participate in the TRC. Those parties that do not participate in the TRC and are later found to have been involved in doping, should be subject to sanction, to the maximum extent possible. We want to encourage all interested parties to be involved and truthful in the process.

The TRC should be empowered to recommend an amnesty to those riders, team staff and administrators who committed or were involved in doping practises provided:

a) the party provides full and candid disclosure;

b) the party accepts full responsibility for their role in doping practises; and

c) the doping practise engaged in was for the sole purpose of seeking sporting achievement.

Any amnesty should be granted during the operation of the TRC. Once the TRC window of availability is closed, any potential opportunity to receive the amnesty will end.

a) a full brief of information from a source that is not in a position of conflict;

b) investigative resources; and

c) assistance from WADA and USADA to establish proper terms of reference.

a) be empowered to discover all documentation in the possession, power and control of the UCI;

b) be empowered to seek documents and testimony from third parties relevant to ensure a complete investigation;

e) publish its findings two months prior to an Extraordinary Meeting of the Congress.

3. Independent doping controls The responsibility for deciding who is tested, when they are tested, and what drugs they are tested for, must reside in an independent entity that is beyond the control of the UCI.

The creation of the independent body will:

a) remove conflict of interest;

b) establish integrity and faith in the process, and

4. Cultural change in the UCI

The culture and management of the UCI must change.

a) must act all times act in the best interests of the riders’ health and wellbeing;

b) must change the individuals within the UCI who have acted contrary to the interests of the sport;

c) must change the roles that have disproportionate influence in the organization;

d) must restore faith and belief in the sport;

f) must develop a cultural shift from being exclusionary and secretive to one of transparency and openness;

g) shall develop a voice which is not dictatorial and aggressive but recognises strong leadership which promotes confidence, trust, unity and transparency;

1
Durham cyclist kicked off bike by motorcyclist
2
Near Miss of the Day 414: Driver overtaking cyclist at speed almost hits another head-on
3
Bishop fractures skull after being doored while cycling - but says he should have worn his helmet
4
Police refer themselves to watchdog after cyclist is seriously injured in collision with suspected drug driver
5
Police across UK launch three-week blitz on speeding drivers to keep cyclists and others safe
6
Strava changes: Will you be paying the price?
7
Kent cyclist who suffered fractured spine says he'll never ride again after collision he says was deliberately caused by pedestrian – police appeal for witnesses
8
"Oblivious" speeding driver handed five and a half year jail term for killing six-year-old boy riding home from football practice