Just In : Kona Jake The Snake

Tis the season, we take a quick look at Kona’s new and very orange cross bike.
by VecchioJo

Although they’re predominantly a mountainbike company Kona happily and successfully include road and town bikes in their portfolio and they’ve had cyclo-cross bikes in the catalogue for about 15 years now, so they’re not just tacking the genre on the end of the line because ‘cross is a bit on-trend right now - indeed the Jake the Snake is something of a legend.

Over the years the various incarnations of the Kona Jake series has gathered many fans amongst racers and everyday riders alike, and right now one of them is doing well under Helen Wyman, European & British National CX champion, who is having a rather successful season at the moment. So some heritage and palmares to live up to then.

The Jake The Snake sits second in line in the Kona ‘cross range, with only the all-singing, all-dancing over the barriers full-carbon Major Jake above it in the rankings. Although it’s less than half the price of its big brother at £1399
and made of less exotic alloy the Jake The Snake has more than enough going for it to make it a serious race and ride contender. 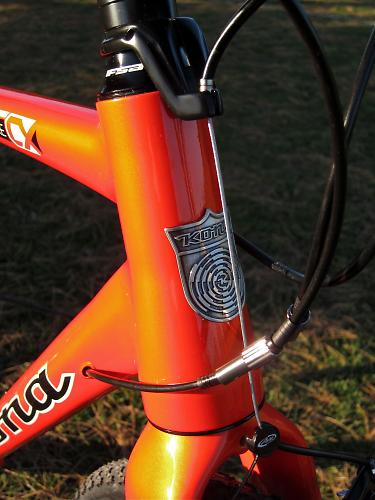 The really quite very incredibly orange Racelight 7005 butted aluminum frame has a tapered head tube with a zero stack headset, you’re no-one these days if you haven’t got a tapered head tube to keep the front end stiff and in line at all times. The full carbon Kona CX fork slotted in there is as stocky and flutter free as you’ve come expect too, a far cry from the noodly CX forks of just a few years ago. Heading backwards from there the top tube is triangulated at the head tube and tapers gently to a flattened top and bottom at the other end, again you’re not anyone in the ‘cross world unless you’ve got a flattened underside to the top tube helping with comfy shouldering. Look closely and you’ll see that the down tube is actually a chunky hexagon, subtly fatter vertically at the head tube and horizontally at the bottom bracket for side to side rigidity in both those areas. 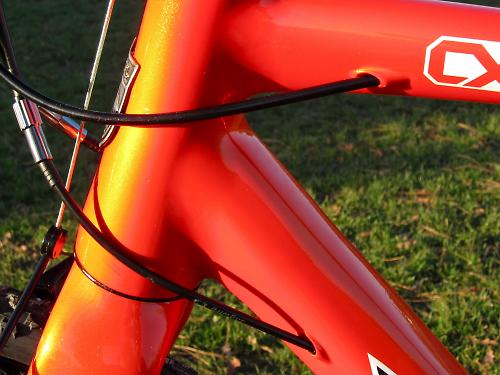 The rear brake cable and both gear cables are internally routed. As well as making braking and shifting less affected by sloppy mud it also it makes the bike less snaggy on clothing and for easier down tube grabbing when clumsily fumbling the bike onto a shoulder towards the end of a race. The gear cables emerge in front of the bottom-bracket to continue traditionally to their respective derailleurs. 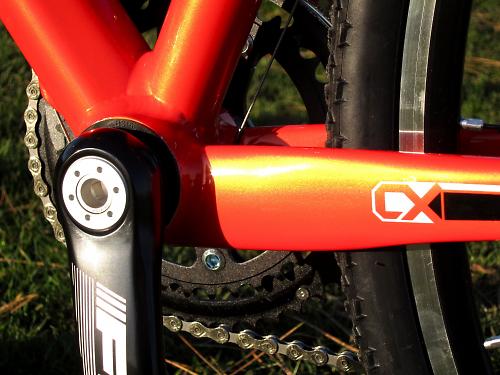 The seat and chainstays are a little less fancy than the front triangle, the former are a dead straight constant radius whilst the chainstays are flat and thick exiting the BB30 for stiffness, there might be a theme developing here, but slim down towards the rear dropouts and are crimped at the tyre for extra clearance. 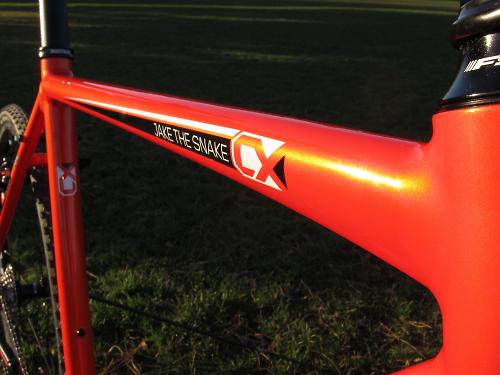 Geometry isn’t going to throw you through the red-and-white tape in a hissy fit, occupying a fast yet comfortable middle ground. The head and seat angles are much the same as everyone else’s and the head tube is in the somewhere between ridiculously racey and district-nurse comfy. The top-tube on this 56 is 565mm which is a little longer than usual, but the supplied stem is a little shorter than the norm, which keeps the bars in about the same place whilst keeping the steering race sharp.  The bottom-bracket hovers quite old-school high as more and more people are lowering theirs for added stability, but the plus side is greater ground clearance for pedaling through corners and off-road debris. Weight isn’t going to slow you down much either, this 56 ends up at 9.2kg (20.4lbs) without pedals, which is a respectable heft considering it’s not unweighed down by bling. 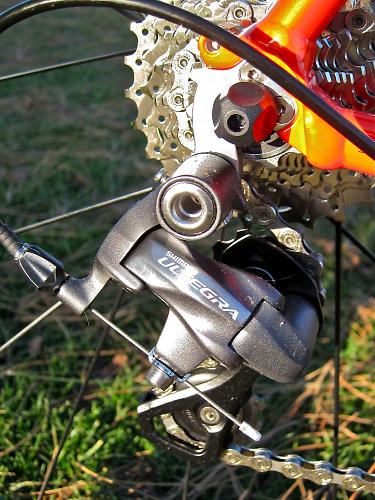 Running gear is a sensible mix of “it’s only going to get dirty and treated badly” Shimano 105 and Ultegra. The rear-mech is showroom eye-catching Ultegra while the STIs and front mech are 105, the 12-28t 10 speed cassette is 105 too, and matched to the 36/46th chainring combo on the FSA Gossamer Compact cranks make for a gear spread that’s genuinely useful for cyclo-cross compared to the road compact 34/50 that lazy manufacturers sometimes slap on. Thanks for that. Finishing kit is mostly looked after by Kona own-label stuff, the seatpost, OS stem and handlebars all look like they’ll do the job as well as any branded kit with the wide shallow drop bars a welcome sight, and although it has a Kona graphic down the, er, slot WTB supply the saddle in the form of their Volt Comp with a Love Channel and Comfort Zone, which both sound nice. Avid Shorty 6 cantilevers sort the stopping. 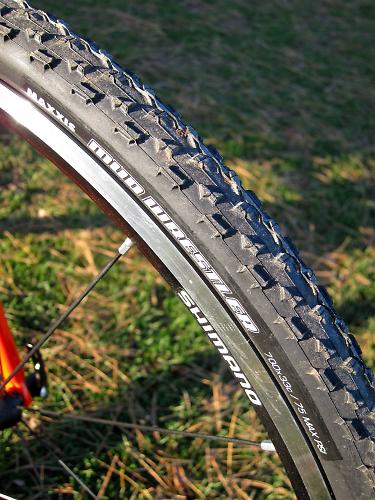 The wheels are Shimano RS10A’s and they’ve got cyclo-cross happy tyres on in the shape of Maxxis Mud Wrestler 700x33Cs, much like the gearing a nod that the bike is designed for CX racing straight out of the box rather than pavement bashing on the commute. 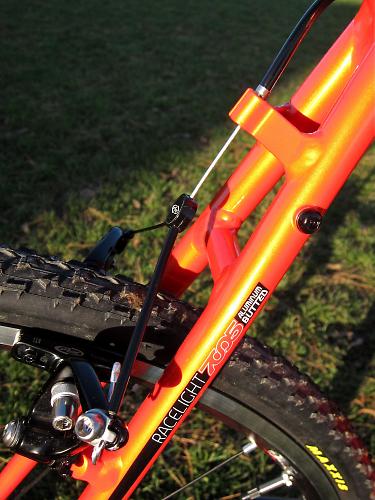 Kona say you can race, commute, train and then do it again on the Jake The Snake. For those commute and train moments there are two water-bottle mounts and mudguard mounts on both the fork and rear dropouts, with rack mounts on the seatstays for those that prefer a cyclo-cross bike for more workaday duties. We’ll do all of that to the orange beast, but first off we’ll race it on Sunday.