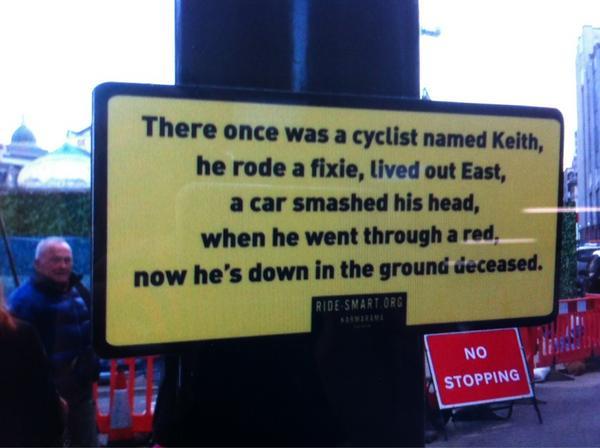 Everyone seems to be talking about cycle safety right now, what with the injuries to both Bradley Wiggins and Shane Sutton over the past week. But London-based ad firm Karmarama have taken it upon themselves to solve the problem with a simple message: Don't be a stupid twat.

Because apparently, that's the root of the problem. "Every year in this country there are around 19,000 reported cycling accidents on our roads, and on average 3,000 cyclists who are killed or seriously injured," their website, www.ride-smart.org, states. No argument there, it's a sobering statistic.

"Cyclists riding like stupid twats cause a percentage of these accidents so lots of accidents, injuries and deaths could therefore be avoided," it then goes on to say. And helpfully lists the most twattish things you can apparently do, which in order of twattishness are jumping red lights, cycling with headphones, not having lights at night and just "being stupid".

As well as their website, which loops videos of daft and dangerous behaviour by various riders, Karmarama have helpfully put up signs around London with limericks describing the deaths of fictional cyclists due to their behaviour.

There's so much wrong with this approach it's difficult to know where to start. But we have to start somewhere, so let's start with the fact that it's a huge exercise in victim blaming. The campaign links actual scenarios where cyclists are being killed – mostly it talks about being hit by lorries – directly with rider behaviour, and at no point talks about the responsibilities of other road users, as if it's rider behaviour that's the sole issue.

Chris Peck of CTC told The Guardian at the time of the above report: “The main cause of crashes seems to be 'failed to look properly', whereas very few cyclists are injured or killed acting illegally, such as failing to use lights at night or disobeying traffic signals. We believe that the government should now focus on tackling the causes of injury which appears to be mainly inconsiderate and dangerous driving. Reduced speed limits, stronger traffic law enforcement and cycle-friendly road design are the solutions."

The campaign, if we can call it that, is also massively divisive in that it works to reinforce the prejudices that many people have – including, we'd suggest, the people that cause most danger to cyclists – about the behaviour of bike riders. The more people that think that deaths of cyclists on the road are due to simple twattery on the part of those killed, the less likely they are to look at their own behaviour. That's not good.

There's so much more, but we'll sign off with a quick note that any campaign based largely around limericks should probably employ a copywriter that can do good ones. And leave the last word to Mark Ames from top London cycling blog ibikelondon, who said of the campaign, ""The message that all road users should take care is no bad thing, but this 'campaign' – which has been seemingly dreamt up by the advertising agency Karmarama - is so uncomfortably ill-thought out, ham-fisted and juvenile it leaves one wondering if they left the work experience kids in charge of the 'Publish' button?

"It wouldn't be so bad if it existed only online but the installation of these badly written limerick signs in public spaces serves not only to perpetuate the myth that cyclists are responsible for their own demise, but also could cause genuine distress to those of us who have witnessed real cycling crashes on London's dangerous roads and who might come across these by accident. If I was an advertiser I'd be checking my brand was safe in the hands of Karmarama if this is the best they can come up with. On the other hand if this is supposed to be some kind of not so clever stunt then sadly, in the week that the 12th cyclist to die in London in 2012 passed away, it's just not terribly funny."

Karmarama, who have so far been likened to Nathan Barley and fictional Twenty Twelve PR firm Perfect Curve by the bike congnoscenti, have a mantra: Work hard, Be nice to people, Play ping pong. This phoned-in and frankly ridiculous publicity stunt seems to fail on all three counts... unless they were playing ping pong when they dreamed it up, that is. We wouldn't put it past them.

Write a limerick detailing what you think of the campaign and stick it in a comment below. A pair of socks to the winner! We'll judge it when the fuss has died down.