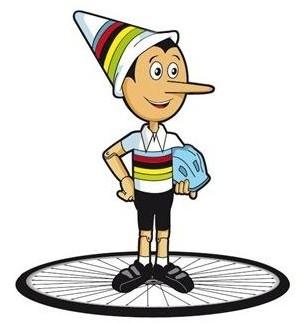 In a week when UCI president Pat McQuaid has insisted the governing body has nothing to hide in relation to the Lance Armstrong scandal, organisers of next year’s road world championships in Tuscany have unveiled the event’s mascot – Pinocchio, the toy made of wood who dreams of becoming a boy and whose nose grows each time he tells a lie.

With some believing that life president Hein Verbruggen, under heavy criticism as a result of the Armstrong affair, is still pulling the strings at the UCI, the choice of a puppet as the symbol of the event is a doubly unfortunate one, although organisers insist that it is other qualities of the fictional character that they are looking to highlight.

“Ours is a Pinocchio connected to his origins, happy, athletic and attentive,” says the description on the Toscana 2013 website. The character, best known outside Italy as a result of the 1940 Disney film, was created by the Florentine writer Carlo Collodi, who published his book The Adventures of Pinocchio in 1883.

“He is looking at the horizon, expressing an optimistic attitude versus the future. The expression of his face is smiling, happy, positive” – perhaps not the best choice of word in the current environment – “and at the same time astonished.”

Astonished at the scale of the doping revelations that have hit the sport over the past couple of weeks? Not at all, although looking at the length of his schnozz, you might be entitled to wonder what he’s hiding in his own past.

Nope, he’s “astonished by the beauty of what he sees in front of himself (because there is land and places that keep astonishing),” says the organising committee.

“This type of expression shall also be an invitation to the public to come discovering the beauty of this land. The upright standing Pinocchio with his right hand to his flank represents his happiness and pride.

“Our Pinocchio is happy that his land, Tuscany, has been chosen to host the World Championships of Cycling. The outline is athletic and slim,” they add, “just like a real driver” – that should be “rider,” a little lost in translation there, unless there’s a big change in UCI equipment regs we haven’t been told about yet.

Pinocchio, it turns out, also appears to be pro-helmet compulsion, although with a noggin made of wood you wouldn’t have thought he’d need one.

“This Pinocchio is also one who reminds us of the social message: Under his left arm he holds a helmet to “communicate”, to children and also to adults, that safety is necessary (at competitions and also if you drive [ride] just for fun).”

1
Near Miss of the Day 848: An overtake worthy of the 'must get in front' title
2
Victory claimed for harassment campaign by “mob of decent people” as helmet cam cyclist deletes Youtube and Twitter accounts
3
“People need to see justice being done”: CyclingMikey says camera cyclists suffer online abuse because some motorists “feel they have the right to drive how they want”
4
You've heard of a coffee ride - now Canyon uses real arabica coffee for new Speedmax CF SLX finish
5
Murder suspect in deaths of father and son killed while cycling released on bail
6
Conor McGregor knocked off his bike... and gets a lift home off the driver who hit him
7
Fancy a 3D-printed saddle custom-made for your butt? Plus more tech news from DT Swiss, Giant, 3T, Chris King, Classified, Stages & more
8
Specialized closes inclusive women’s cycle clothing brand Machines for Freedom