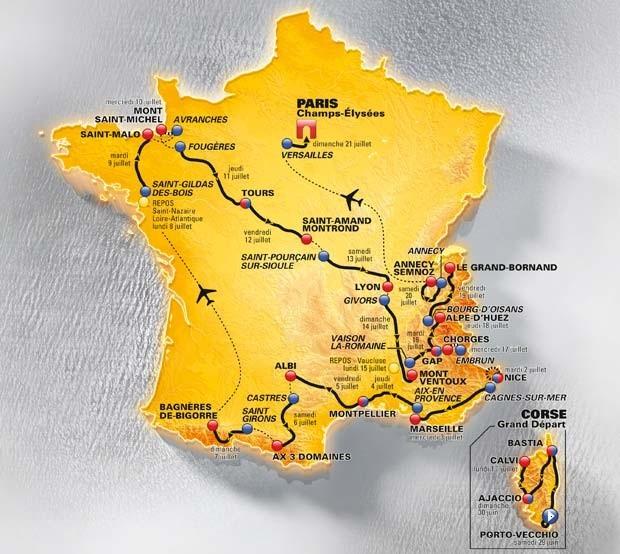 Mont St Michel time trial, Bastille Day summit finish on the Ventoux, evening stage on the final day in Paris and twice up Alpe d'Huez in one day. Plus Wiggo to focus on Giro on 2013?...
by Simon_MacMichael

A first-ever visit to Corsica followed by a team time trial in Nice, an individual time trial ending at Mont Saint Michel, a Bastille Day summit finish on perhaps cycling's most evocative climb, Mont Ventoux and  a double ascent of the Alpe d'Huez - those are some of the highlights of next July's 100th edition of the Tour de France, unveiled in Paris today.

Four Tour winners were among the riders at the Palais de Congres at Porte Maillot as the parcours of next year's race was revealed - Andy Schleck, awarded the 2010 victory as a result of Alberto Contador's ban, the Spaniard himself, who retains his 2007 and 2009 titles, the 2011 victor, Cadel Evans and of course defending champion, Bradley Wiggins, the first British winner of the race.

Given events in Geneva on Monday, it was of course another man who stood seven times in yellow in front of the Arc de Triomphe whose ghost loomed large over today's proceedings.

But following a year in which eight of the ninety-nine editions of the race have seen the original winner's name erased from the record books, it's timely to be reminded that whatever anyone says, it is about the bike race, after all.

And what a race is in prospect. After three days on the island that produced France's grimpeur social par excellence, the Emperor Napoleon, it visits the three big cities of the country's Mediterranean coast - Nice, Marseille, and Montpellier.

With no prologue and Stage 1 predicted to end in a bunch sprint, you can be sure that Mark Cavendish will be looking to grab a rare opportunity to get into the one Grand Tour leader's jersey to have eluded him so far. He won't be the only sprinter with an eye on the maillot jaune, however.

Whoever takes the race lead on Stage 1 may struggle to keep it on Stage 2, however, with bumpy terrain as the race heads into the interior of the island. Indeed, it's entirely possible the jersey will change hands in each of the first four stages, the last of which features a potentially intriguing team time trial in Nice.

We've known for a while that Stage 5 would start in Cagnes-sur-Mer, but not that even prior to the Tour's visit next year the small seaside town to the west of Nice would already have sealed an infamous place in cycling history as the alleged home of the notorious 'motoman.'

You probably won't be able to move for fans getting their own souvenir USADA-style photo taken outside the Stars 'n' Bikes shop - we're thinking of taking along a black cardboard box with the word 'redacted' painted on it, sticking it on Tony's head and charging ten euro a time for a picture, then retiring to nearby Antibes on the proceeds.

After those visits to Marseille and Montpellier there's a couple of days in the Pyrenees, which come unusually early in the race, a summit finish at Ax-3-Domaines followed by a five-col, 165km romp from Saint-Girons to Bagneres de Bigorre. After the first rest day it then swings up towards Brittany for a stage finishes in the historic city of Saint Malo and an individual time trial that ends at one of France's most iconic historic monuments, the island monastery of Mont St Michel. Hopefully they've got the times of the tide correct.

The race then heads via Tours and Lyon to what should be an unmissable Bastille Day ascent of Mont Ventoux (the classic climb from Bedoin) on the second Sunday, also the longest stage of the 2013 race at 242km. Unusually, that's two separate visits to Provence next year. Then we're into the Alps for the closing week and the business end of the race.

Highlights of that final week include a mountain time trial from Embrun to Chorges – "The toughest ever Tour time trial" according to the organisers – followed by a mouthwatering double climb of the Alpe d'Huez on the stage from Gap – the second a summit finish – which should provide plenty of fireworks of the metaphorical kind ahead of the real ones that will greet the winner of the 100th Tour de France on the Champs-Elysees: The final stage in Paris will be an evening affair, and the laps of the Champs Elysées will include the Arc de Triomphe instead of stopping short of the famous monument.

Before that final stage though there's the last hurrah of the 2013 route, a short but painful stage around Annecy lake that ends with an 11km climb to the ski resort of Annecy-Semnoz; that climb could prove decisive if the GC is still tight after three weeks of racing. At an 8.5% average gradient it's certainly steep enough to open up the gaps.

The route was touted before its release as one that didn't particularly favour current maillot jaune holder Bradley Wiggins, and certainly there's a couple of stages – including twice up the Alpe – that he wouldn't relish. The final announced route doesn't look too bad for a rider like Wiggins, but so-far-unconfirmed reports from the launch suggest that his focus for next year will be the Giro d'Italia, and while he will start the 100th Tour he'll do so in a role reversal of last year, with last year's runner up Chris Froome taking up leadership of Team Sky for the race. Froome, who was riding at his best in France in 2012, often looked the stronger rider in the mountains although he lost ground to Wiggins in the time trials; next year's race has less individual distance against the clock and the second ITT stage, from Embrun to Chorges, promises to be a hilly and technical affair that won't favour the purer TTers. As such it's likelt to prove a more balanced parcours, with more reason to attack in the hills, and that could suit the punchier style of Froome better than Wiggins.