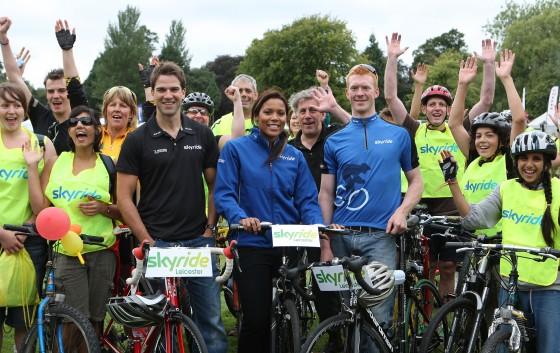 Thousands take to streets of Leicester for latest Skyride

The fourth city Skyride saw around 8,000 cyclists take to the traffic-free streets of Leicester on Sunday. Cyclists of all ages and abilities took to the streets for the event, hosted by Sky in partnership with British Cycling and Leicester City Council, joined by stars from the worlds of cycling, sport and TV.

Councillor Ross Willmott, leader of Leicester City Council said: "It's been wonderful to see the streets of Leicester filled with so many people cycling and obviously having such a great time. Cycling is the healthiest, greenest way of getting about, and after today I hope that the thousands of people who took to their bikes will now be thinking of getting back on their saddles permanently."

The riders had the chance to experience an 8km circular route around Leicester that was free of cars, buses and lorries. The course took cyclists from Abbey Park, past St Margaret's bus station, along Belgrave Road and Loughborough Road before heading south back into the city along Abbey Lane, and riders had the chance to take in the sights of the Golden Mile, Belgrave Hall and the National Space Centre on route.

Clancy commented: "I thoroughly enjoyed myself and am so glad that I have had this unique opportunity to experience Leicester like never before on traffic-free streets. Cycling is such a great way to keep fit and I hope today has reminded the people of Leicester how fun it can be as well."

Participants were also able to take part in a number of activities organised by Sky, including a fancy dress cycling parade after having their bikes customised by artists, watch Professional BMX riders performing tricks, and pick up tips on health and wellbeing from British Cycling and the Department of Health's Bike4Life initiative.

Corin Dimopoulos, Sky's Director of Cycling, added: "I'm delighted with how popular Skyride Leicester has been and also to see so many families cycling together on traffic-free streets and enjoying the day's entertainment.”

Skyride Leicester follows similar events held in Manchester, Hounslow and Glasgow, over the past month, and the final city Skyride is The Mayor of London’s Skyride in Central London on Sunday, September 20, the day after the final stage of the Tour of Britain is held in the city.

The Skyride programme is running alongside a series of smaller local and guided rides which run through October. For more information visit www.goskyride.com.