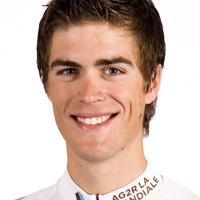 26-year-old has right to request test of B sample, team manager Lavenu expresses shock and anger
by Simon_MacMichael

The UCI has revealed that AG2R-La Mondiale rider Steve Houanard has been provisionally suspended following an adverse analytical finding for EPO.

The banned substance was found in a urine sample taken from the 26-year-old in an out of competition test on 21 September 2012 which was analysed at a World Anti-Doping Agency accredited laboratory in Barcelona.

Houanard, who turned professional with Skil-Shimano in 2009 and joined his current team at the start of the 2011 season, riding that year's Vuelta, has the right to request and attend an analysis test of his B sample.

The UCI added: “The provisional suspension of Mr Houanard remains in force until a hearing panel convened by the French Cycling Federation determines whether he has committed an anti-doping rule violation under article 21 of the UCI Anti-Doping Rules.”

In a statement published in English on its website this evening, AG2R-La Mondiale said: “We heard at 6:20 p.m. by an official announcement of the International Cycling Union that Steve Houanard has been tested positive for EPO on September 21st.

“We are obviously extremely shocked by this news. Therefore, we decided to immediately to push him aside from competition and we lay him off as a precautionary measure until the French National Federation opens disciplinary proceedings.”

The team’s general manager,  Vincent Lavenu, added: "It is with sadness that I heard this unfortunate news. Above all, I’m driven this evening by a strong feeling of anger because of important damages for the team and our sponsors.

“I want to reiterate our commitment to the biological passport and to the values upheld by the International Cycling Union. We have full confidence in the competent authorities in their fight against doping.”