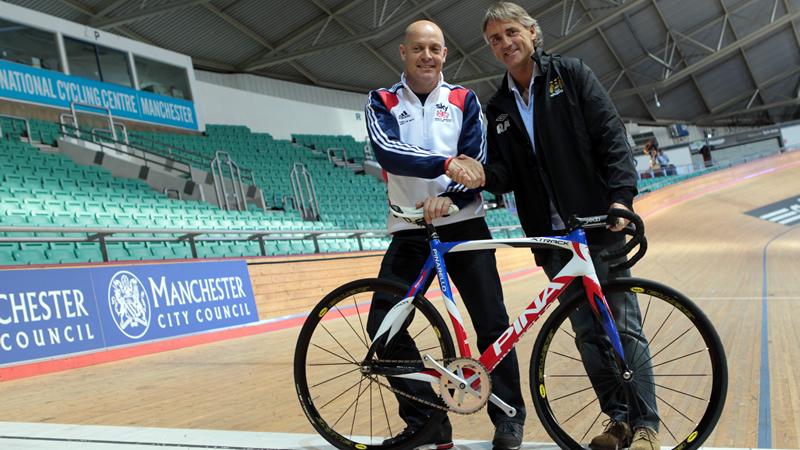 Manchester’s Velodrome yesterday witnessed what, in sporting terms, must be the ultimate case of a neighbour dropping by for a cup of tea and a quick chat as Manchester City manager Roberto Mancini popped across the road from the Etihad Stadium to catch up with British Cycling and Team Sky supremo Dave Brailsford.

As a player with Sampdoria and Lazio, Mancini helped his clubs win two Serie A titles, two UEFA Cup Winners Cups and the Coppa Italia on six occasions. He also represented Italy 36 times.

As a manager, his record is equally  impressive; three Serie A titles with Internazionale as well as two Coppa Italia victories there and one apiece with Fiorentina and Lazio. Since coming to England, he has managed to end City’s long barren spell by guiding it to the FA Cup last year and, this May, its first ever Premier League title.

That coaching record is one that few can match in any sport, but someone who stands comparison is Brailsford, fresh from masterminding Bradley Wiggins’ Tour de France success this summer as well as what had been widely viewed as the impossible feat of getting Great Britain’s cyclists to match their gold medal haul from Beijing.

Mancini, it turns out, is a bit of a cycling fan. His own father was a huge supporter of Gino Bartali, while the future Serie A star’s own heroes were Felice Gimondi and Eddy Merckx.

He also revealed that he rides to Manchester City’s training ground three or four times a week – perhaps from now on in the Team Sky jersey with an Italian tricolore and the name ‘Mancini’ down the side that he was given during his visit to the Velodrome yesterday.

There, he was treated to a behind the scenes tour by Brailsford, as well as witnessing a training session that perhaps gives a hint of the Team GB men’s team sprint line-up for Rio 2016 – Philip Hindes, Jason Kenny and, perhaps surprisingly, Ed Clancy, winner of team pursuit gold in Beijing and London.

“I started to go on a bike four years ago,” said Mancini, quoted on the British Cycling website. “It’s fantastic. I think these guys they work very hard. This sport is very tough.

“I have a lot of respect for the cyclists for that. I remember when I started to cycle I understood just how hard they had to work every day and sometimes I wonder how it’s possible they can train for three or four hours every day on the bike.”

Mancini wasn’t the only one looking to learn lessons from another sport, however.

With his Team Sky hat on, at least in the figurative sense, Brailsford revealed: “I’m interested in terms of Roberto’s experience of managing different cultures, different types of players, big characters, lots of money.

“That’s a great skill he has. For me it’s quite new, for two or three years I’ve been doing that. I could learn a lot how to manage the potentially challenging players. It’s very different from a national team where you have what you’ve got.”

Manchester City boss Mancini revealed that one thing he was interested in learning more about was performance analysis, something of course that is embedded deeper within the culture of Team Sky and British Cycling than anywhere else in cycling.

“In football we have improved on this in the last ten years but cycling is still stronger than football in this way,” he explained.

Another area that the man who counts the unpredictable Mario Balotelli among his charges was eager to gain a greater understanding of was the use of sports psychology.

“Football is different from cycling, we probably need to work with psychologists more but we don’t,” he admitted - joking that in Balotelli's case, he'd probably need to employ the services of a pair of them.