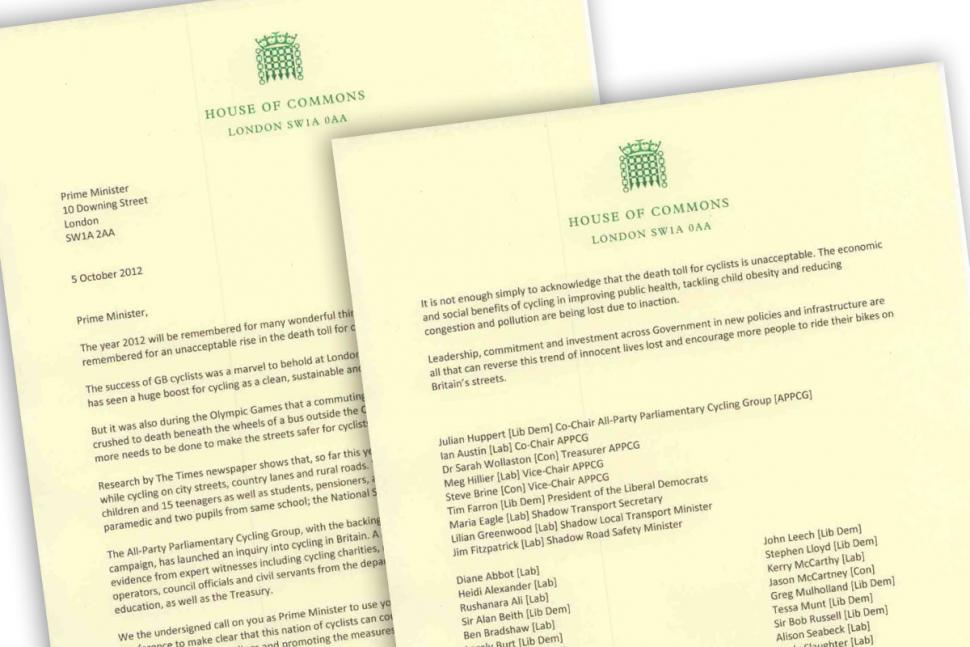 A letter signed by 40 MPs has been sent to Prime Minister David Cameron urging him to use his speech at next week’s Conservative Party conference to demonstrate “personal leadership” on the issue of cycle safety.

Last month, the APPCG announced that it is launching an inquiry in association with The Times newspaper to address the issue of ‘Why Don’t More People Cycle?’

That inquiry will see a panel of MPs and peers hear evidence from experts including representatives of cycling organisations, local authorities, road safety charities and transport engineers.

In the letter sent to the Prime Minister today, a copy of which has been provided by the APPCG to road.cc and can be downloaded at the end of this article, the success of GB cyclists at London 2012 which Mr Cameron witnessed first-hand at the Velodrome is described as a “marvel to behold,” resulting in “a huge boost for cycling as a clean, sustainable and inherently safe way to travel in the UK.”

However, the letter goes on to describe the heavy casualty toll suffered by cyclists on the nation’s roads, with 89 lives lost so far this year.

The signatories to the letter call on Mr Cameron “as Prime Minister to use your speech at Conservative Party Conference to make clear that this nation of cyclists can count on your personal leadership in studying the inquiry's findings and promoting the measures needed to get more people cycling in Britain."

They also urge Secretary of State for Transport, Patrick McLoughlin, appointed to that post in last month’s cabinet reshuffle, “to outline in his speech at Conference precisely what measures the Department for Transport will implement not only to encourage more cyclists to take to the roads, but also urgently to make it safer for them to do so.

“It is not enough simply to acknowledge that the death toll for cyclists is unacceptable,” the letter continues.

“The economic and social benefits of cycling in improving public health, tackling child obesity and reducing congestion and pollution are being lost due to inaction.

It concludes: “Leadership, commitment and investment across Government in new policies and infrastructure are all that can reverse this trend of innocent lives lost and encourage more people to ride their bikes on Britain’s streets.”

Speaking at the Labour Party Conference in Manchester earlier this week, Ms Eagle urged the coalition government to adopt the eight points outlined in The Times’ Cities Fit For Cycling campaign, which Mr Cameron said he endorsed shortly after its launch in February.