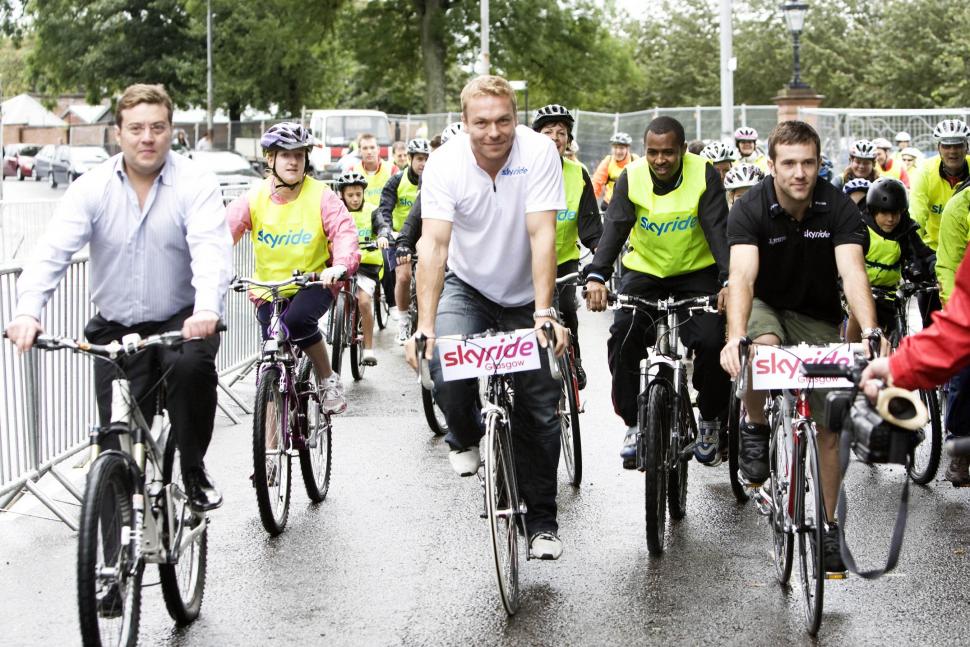 Seven and a half thousand people joined stars from cycling and television at the Glasgow Skyride yesterday to enjoy a day of cycling and entertainment in a traffic-free city centre – despite the poor weather.

Cyclists of all ages and abilities took to the streets for the event, which was hosted by Sky in partnership with British Cycling and Glasgow City Council and they were joined by Olympic medallists Sir Chris Hoy and Ross Edgar, as well as TV personality Gethin Jones.

Four times Olympic gold-medalist Sir Chris Hoy said: “It was fantastic to see so many people enjoying a day out cycling together, having the unique opportunity to cycle through traffic free streets. I hope today has reminded people how much fun can be had from cycling and has encouraged people to get back on their bikes.”

The third city ride in Sky’s summer series of mass participation cycling events took in iconic sights along Glasgow’s Riverside, including the SECC and Clyde Auditorium.

Councillor Archie Graham, Glasgow City Council's Executive Member for the Commonwealth Games said: “It's been wonderful to see the streets of Glasgow filled with so many people cycling and obviously having such a great time. Cycling is the healthiest, greenest way of getting about, and after today I hope that the thousands of people who took to their bikes will now be thinking of getting back on their saddles more often.”

As well as having the opportunity to see their city in whole new light, participants were able to take part in a number of activities organised by Sky. Riders could join the cycling parade after having their bikes customised by artists in the Skyride Style Zone, watch Professional BMX riders performing tricks in the Street Zone, and pick up tips on health and wellbeing from British Cycling and the Department of Health’s Bike4Life initiative in the Active Zone.

Corin Dimopoulos, Director of Cycling, Sky, added: “I’m delighted with how popular Skyride Glasgow has been, despite the poor weather, and it was fantastic to see so many families cycling together on traffic-free streets and enjoying the day’s entertainment.”

The Glasgow event was the third in a series of five city Skyrides taking place across the country, encouraging people to get back on their bikes and enjoy the benefits of a fitter, healthier lifestyle. There is one in Leicester this Sunday, and then the Mayor of London’s Skyride on Sunday, September 20.

If you can’t get along to those then there are also a series of more than 400 smaller local and guided rides, led by fully trained coaches from British Cycling, with over 100 taking place in and around Glasgow. For full details on the next one in your area visit www.goskyride.com.