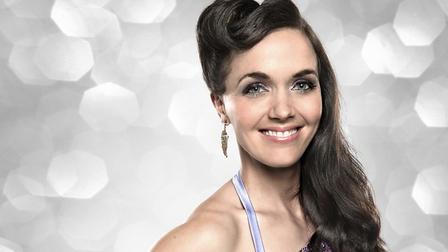 Star of the track talks dance moves and divorce... from British Cycling that is
by Sarah Barth

She's unclipped from the pedals for the last time, and now she's reaching for her ballet pumps.

/content/news/65443-pendleton-reveals-how-pressure-forced-her-self-harmingThe queen of the track, Victoria Pendleton, is to join the cast of Strictly Come Dancing, the Saurday night family entertainment dance show.

She's made no secret of her relief at her retirement from pro cycling, which coincides with the publication of her autobigraphy, 'Between the Lines'.

If you're interested in seeing Pendleton's 'Celebrity unveil' for Strictly, you can click here. Spoiler alert, she goes into her first childhood memory, and what she'd do if she was invisible for the day. It's gripping stuff.

She's not the only Olympian joining in - Louis Smith, the gymnast is also in the line-up. But where Pendleton rates her dance moves as '0.5 out of 10,' we're guessing Smith is rather more snake-hipped.

She said: "With my wedding coming up expectations will be very high now for our first dance! My fiance Scott is already feeling the pressure, but I reckon Scott’s quite good; he has more dance skills already than I have currently.

"Retiring after the Olympics was always going to be a bit hard to follow, and knowing what it’s like post competition when you feel a bit lost and a bit ‘what do I do now?’ having something to focus on whether the result was good or bad at the Olympics was a great thing to do."

In an interview with The Guardian at the weekend, Pendleton spoke of her divorce from British Cycling, and the speed at which it had happened.

She said:"I don't imagine they'd speak to me any more, anyway, to be honest. I'm not imagining I'll have much contact with them. As it is, they've sold my bike already."

She spoke too of her relationship with Jan van Eijden, her sprint coach, who she says reacted angrily when she told him of her love affair with Scott Gardener, an Australian performance analyst who had joined the British team.

"I don't want to win because he takes the credit for it, and really I don't feel he's part of my performance, any more, in some respects. But I would never do that, because I would never compromise my end result. But these thoughts would run around my mind sometimes, when I was feeling particularly low," she said.

Much like Victoria herself, the book appears to be a brutally honest, no holds barred account of what the world of British Cycling is really like for a woman who has admitted that she was fragile enough to cut herself when the pressure got too much.

She said: "Because I have been fairly open and honest about a lot of issues – but I haven't told any lies … I was worried about British Cycling being annoyed that I've kind of, well, not talked them down, but haven't necessarily portrayed them in a glowing light ... For so many years I've had to talk about how amazing the programme is, and how well supported I am, and at times I haven't really felt 100% supported by that, but it's my job, it's what I have to say.

"And I'm still performing, so people are like – well, why are you still producing gold medals then, if it's so bad? It makes for a very difficult situation, and I don't want to be coming across as the whingy whiner, but I'm the only one to complain, so no one else has a problem."