High-end road bike gets a major redesign for 2013 and it's lighter than ever...
by Mat Brett

Canyon have redesigned their Ultimate CF SLX bike for 2013 so that – surprise, surprise – it’s lighter and stiffer than ever and also, they say, more comfortable than before - which is a neat trick if you can do it. We were lucky enough to bag a ride on the new model at Eurobike last week…

This isn’t just a cosmetic redesign by any means. Canyon have spent 18 months working on the engineering here and have incorporated changes that bring the frame weight down to a claimed 790g – and that’s in a size L. Anything under 1kg is very light. Below 800g and you’re talking mega-light. The combined weight of the frame, fork and headset is just 1,190g, according to Canyon’s figures. 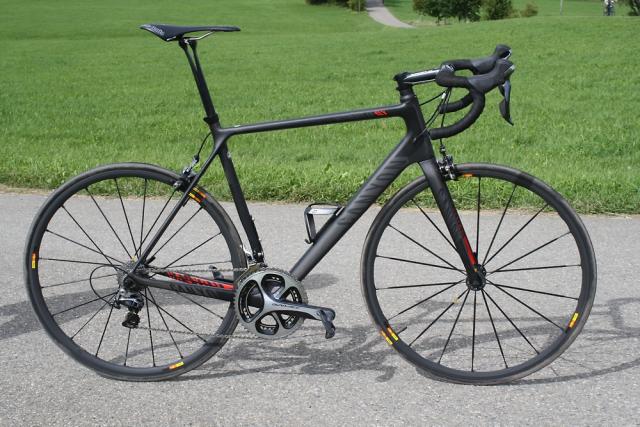 How have they removed the weight? We spoke to Canyon’s Development Engineer Wolfgang Kohl  who told us that they’ve redesigned the dropouts on both the frame and fork – this is the first Canyon road bike with full-carbon dropouts – and they’ve gone for a press fit bottom bracket with a carbon rather than aluminium housing. Canyon have also flattened the top tube, reducing the surface area and the amount of material used, and they now include more ultra high modulus carbon fibres than before. Canyon’s Maximus seat tube, which bulges out for extra rigidity on the non-driveside but stays narrow for extra space on the driveside, has been made slimmer than before too, and the lower section follows the profile of the rear wheel. Canyon are keen to emphasise that this hasn’t resulted in the loss of any stiffness. The chainstays, seatstays and fork legs are all set further apart than previously – they’re kept wide for longer – for extra rigidity. Those fork legs are a little more slender than before, by the way – they’re not so deep from front to back. The idea there is to increase comfort. 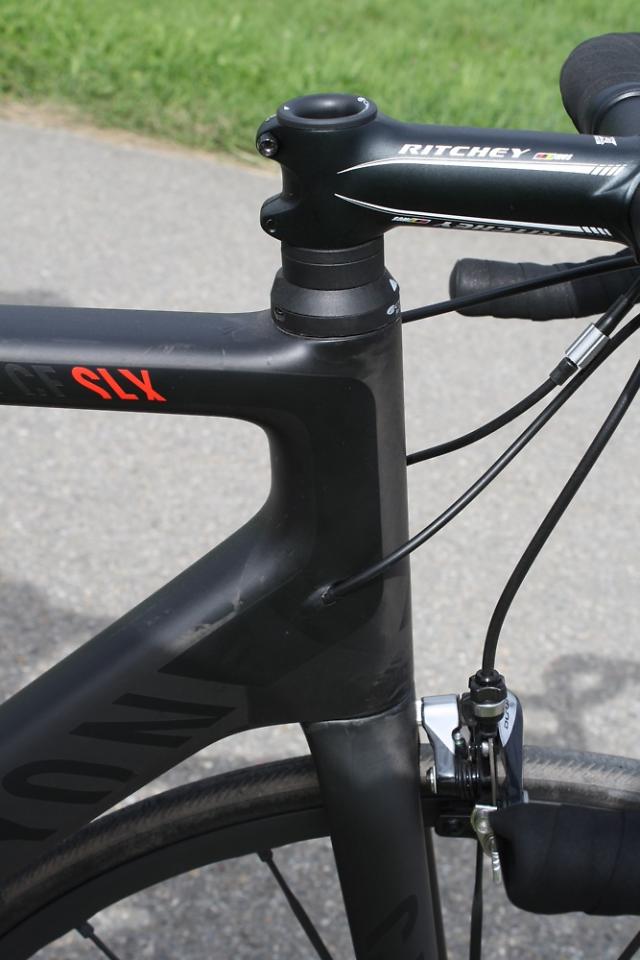 Canyon now route the cables internally for the first time, bringing the Ultimate CF SLX into line with most other top-level race bikes out there – Team Katusha will be on this bike next year. They’ve also redesigned the front derailleur clamp. Shimano use a supporting screw on their latest Di2 and Dura-Ace 9000 mechs and Canyon’s new clamp features an integrated plate for this to tighten against.

Speaking of Di2, Canyon have taken the decision to offer the frame in two slightly different versions depending on whether you want to run electronic shifting or go with mechanical. Rather than having redundant features, this will give a slightly cleaner look.

So, that’s just a brief rundown of some of the key changes. As you can see, although the 2013 Ultimate CF SLX is clearly related to the previous model, it has had a major redesign. The version we have here is the Ultimate CF SLX 9.0 with a Dura-Ace 9000 mechanical group, Mavic Ksyrium SLR wheels, and a Ritchey WCS carbon bar and stem.. You buy Canyon bikes direct from them via their website rather than going through dealers, although we don’t yet have prices. 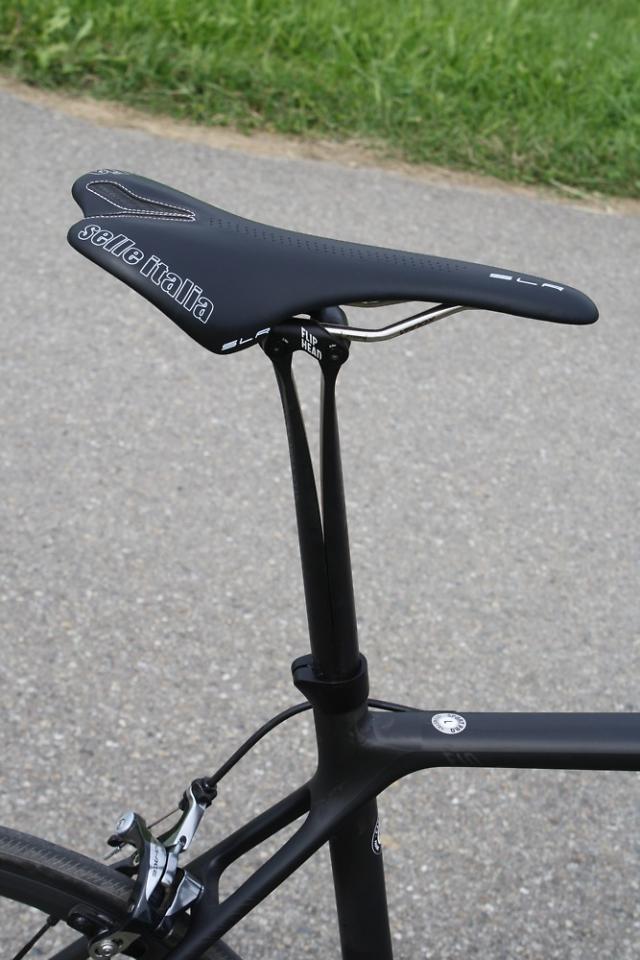 On climbing aboard one of the first things I noticed, unusually, was the seatpost so let’s cover that to begin with…

Our bike was fitted with Canyon’s innovative new VCLS Flat Spring Post (VCLS Post 2.0) which we first saw at Eurobike last year. It’s available as an option on every 2013 Canyon road bike. VCLS stands for ‘vertical comfort, lateral stiffness’, the idea here being to provide a degree of give to filter out vibration as you ride.

It’s a clever design. The post is made in two parts with a split right down the centre. The halves can move independently – they’re two flat springs, with the Flip Head saddle clamp attached to each part. When you hit a bump, the post can move – Canyon reckon by 20-25mm, and the saddle stays horizontal thanks to that Flip Head,

You can probably get a much clearer idea of how it works by simply looking at the picture. The big question, though, is: does it work?

Well, here’s the thing: it does. There’s no question about it. If you purposely sit down really hard on the saddle, you can feel the seatpost flex slightly and then straighten up. And if you direct the bike over manhole covers, drains and the like – purely in the name of research, of course – there’s just a little bit of movement to soften the blow. It’s not a gimmick – it actually works and it weighs a highly reasonable 195g. If you’re worried that the post might flex from normal pedalling, don’t. I didn’t feel anything like that.

Back to the bike itself… we reviewed the Canyon Ultimate CF SLX 8.0 last year and found it to be remarkably efficient, precise, and very responsive. Our initial ride suggests that this updated version scores more highly on all of those fronts. 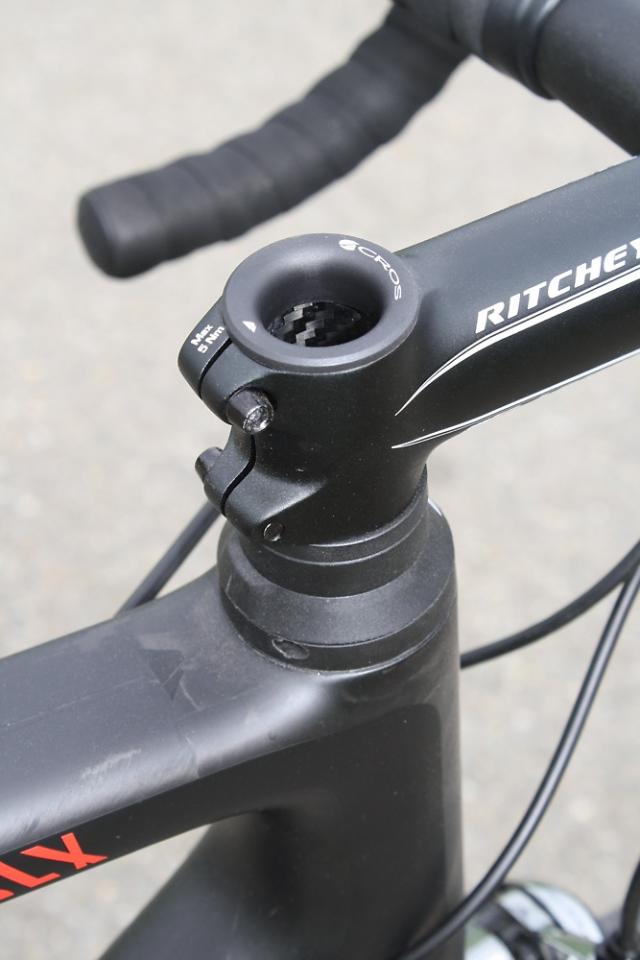 This is a super-fast bike that responds instantly when you put the power in. It climbs beautifully and springs forward if you up the tempo. As promised by the designers, the bike has retained Canyon’s trademark stiffness and that fills you with confidence from the first pedal stroke. Bigger, more powerful riders in particular will love the ride.

As we say on most of our First Rides from Eurobike, we don’t have long enough on the bikes to comment on long-ride comfort and the roads are so glassy-smooth in southern Germany that it’s hard to make a judgment anyway. That said, I’m pretty confident that the VCLS Post 2.0 will deal with bumpy roads just fine to keep you unshaken in the saddle.