We first saw the EMX-525, Merckx's new top-end race bike, at its launch in London the day before the Olympics started. It certainly looked impressive here at Eurobike I got the chance to sling a leg over it to see if the ride matched those stunning looks.

Merckx are aiming high with this new model. For a start the name comes from the number of race wins the great man achieved throughout his career (525 in case you haven't been paying attention). And it's their most advanced bike to date, with the design process being led be composite engineer Dave Luyckx who brings experience from outside the cycling world (a stint in the automotive industry).

The design brief for the EMX-525 wasn't weight or aerodynamics, but ride performance and stiffness. While my brief ride on the smooth undulating roads through idyllic German countryside isn't enough to come to a conclusive verdict, it's clear it's a very stiff and very, very fine handling frame and fork that will satisfy riders wanting a fast and responsive bike. While 1.84kg for a frame, fork, headset and seatpost module it's not heavy by any stretch of the imagination, it's not gunning for the lightweight crown and instead is a bike focused on delivering unrivalled stiffness with excellent power transfer – a bike you can imagine the Cannibal giving the thumbs up to if he was a racer today.

To achieve this stiffness, Merckx have gone big. And I mean really BIG. Volume is key with the shape of the tubes, with a massive slab sided downtube, huge tapered head tube with a  1.5in lower bearing and BB86 bottom bracket, chosen because it's the largest standard currently available. Everywhere you look there's a fold, crease or bulge. The angular top tube and rear triangle give the bike a very distinctive look, it certainly stands out when surrounded by the current crop of 2013 bikes. While many bikes getting very anorexic either in pursuit of lightness or as aerodynamic performance, the EMX-525 strikes out in its own direction.

So it looks like it will be explosive and on the first climb of our test loop this is the right word to describe the ride sensation. It surges forward with real authority. Press hard on the pedals and the frame feels solid. Throw the bike through corners and the front end stiffness gives an incredibly accurate steering response, it's precise and very very accurate. How would it fare on the scarred roads around East Sussex, where I recently tested the lower EMX-3? That's not a question I can really answer after such a short stint in the saddle. But I came away impressed; Merckx have clearly delivered on their quest to produce an outstandingly stiff bike.

I came away from my short ride on the Merckx impressed. They've clearly raised the bar, it's one of the best handling bikes I've ridden in some time. It warrants in-depth testing on roads I know and I'll hopefully arrange that before the end of the year. Could it be the ultimate race bike? It's certainly vying for that crown, make no mistake. 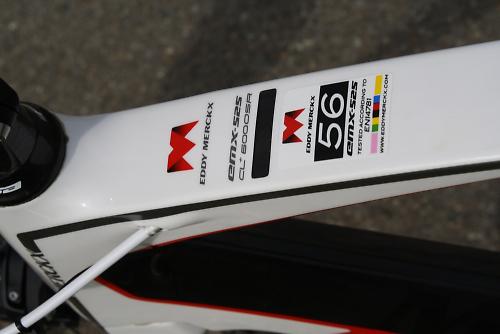