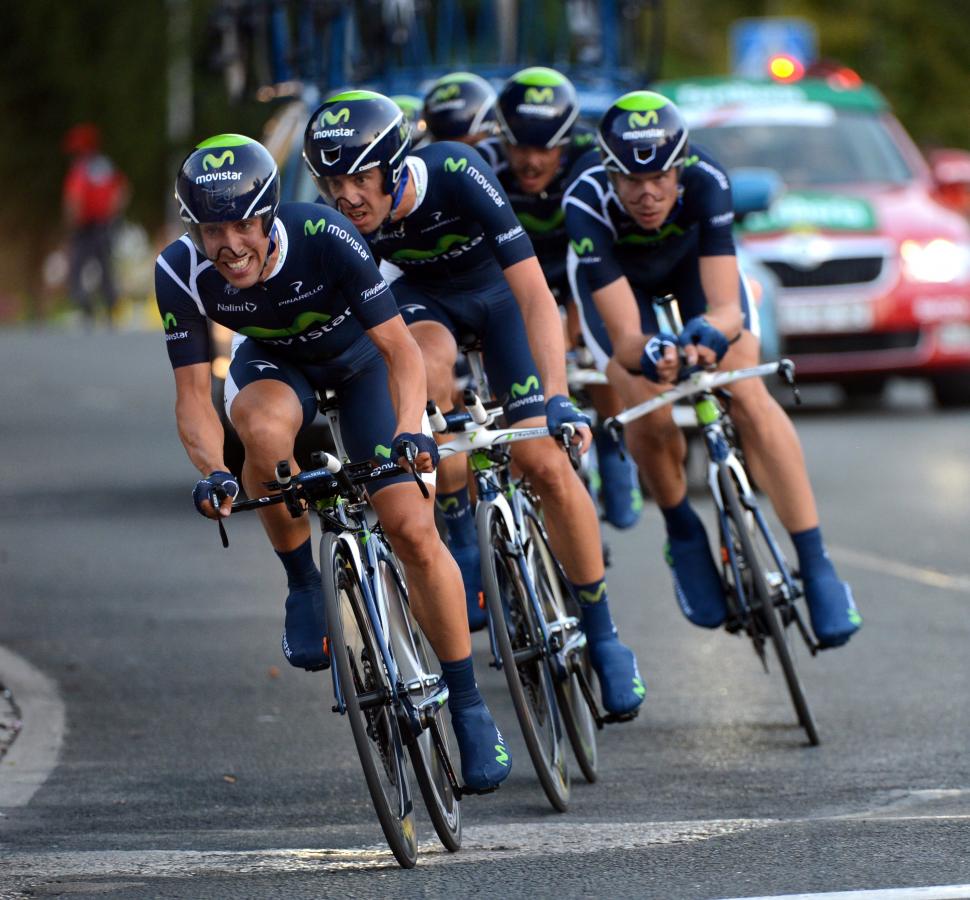 Vuelta Stage 1: Movistar take team time trial in Pamplona, but it's tight at the top

Movistar, the last team out on the course in this evening's team time trial that got the 67th edition of the Vuelta under way, set the quickest time on the 16.5 kilometre course in Pamplona. The team, which features two former Vuelta champions in the shape of last year's winner Juan Jose Cobo and 2009 victor Alejandro Valverde, posted a time of 18 minutes 51 seconds, some 10 seconds ahead of a trio of teams on 19 minutes 1 second - Rabobank, Omega Pharma Quick Step and BMC Racing.

It's another Movistar rider, though, the 25-year-old Jonathan Castroviejo, who takes the first leader's jersey of the race after crossing the line in Pamplona's famous bull ring ahead of his team mates, and should he hold onto the jersey tomorrow, the former Euskaltel-Euskadi rider is guaranteed a hero's welcome when the race heads briefly into his native Basque Country on Monday. Four other teams including some of the men most hotly tipped for the overall win lie no more than 5 seconds further back - Team Sky, with Chris Froome, finished 12 seconds down on the eventual winners, finishing in the same time as Lotto Belisol.

Saxo Bank-Tinkoff Bank, whose Alberto Contador, Vuelta winner in 2008, is favourite for the general classification, are 2 seconds further back and 1 second ahead of Katusha, whose hopes rest mainly on Giro d'Italia runner-up Joaquin Rodriguez, but who also have a former Vuelta winner in the shape of Denis Menchov.

This time last year, Team Sky put in an uncharacteristically poor team time trial in Benidorm as the 2011 Vuelta got under way and this evening it was another team that is usually among the best drilled in this discipline, Garmin-Sharp, that struggled.

A crash in the middle part of the course resulting in several Garmin riders hitting the tarmac and the team would eventually post the joint slowest time, 1 minute 27 seconds down on the leader, joining Caja Rural at the bottom of the standings with the Spanish UCI Professional Continental outfit just a fraction of a second slower.

Caja Rural had been the first team to roll off the ramp and onto the 16.5-kilometre course at a little after 7pm this evening, swapping their usual green kit for white body suits complete with printed red sash in homage to the running of the bulls that takes place in Pamplona each July during the San Fermin festival.

Much of the course followed wide roads on the periphery of the centre of the city, which is the capital of Navarre, but the final part of the course saw the riders sweep back into the narrow, cobbled streets of the city centre most famous for well-fortified locals and tourists taking their chances as bulls and steers are driven through the streets behind them on their way to the bull ring.

It was perhaps a more technical course than it had looked on paper, and with the time taken when the fifth man crosses the line, a number of teams were struggling to keep five riders together even ahead of that tough final kilometre or so.

While many expected Team Sky to post the fastest time today, as one of the few teams to have publicly stated that their aim is to win the race, they are likely to be happy with their day's work, with a tough three weeks lie ahead, taking the red jersey so early may have caused them to expend more energy than they wished in the early stages of the race.