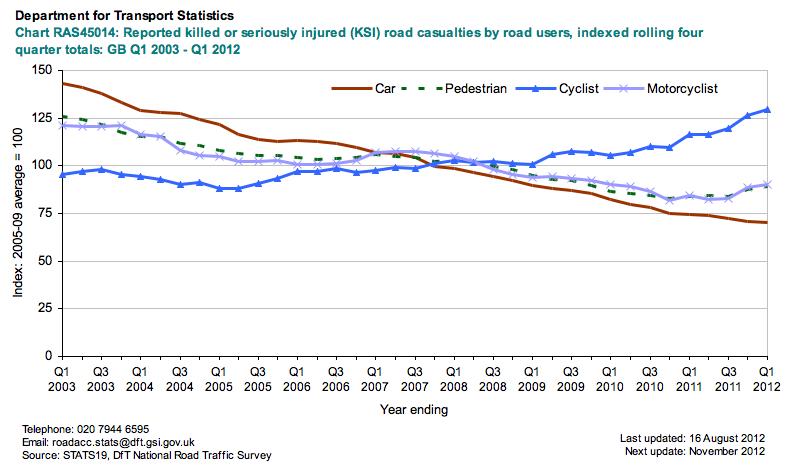 Statistics released today by the Department for Transport (DfT) reveal that the number of cyclists killed or seriously injured on Britain’s roads is continuing to show a sharp increase, rising by 13 per cent in the first three months of 2012 compared with the same period a year earlier. The latest figures follow a jump of 16 per cent from 2010 to 2011 announced by the DfT in June this year.

Including slight injuries, the estimated total of all road casualties in the period was down by 2 per cent compared to the opening three months of 2011.

Looking at the data relating to cyclists on a rolling 12-month basis, there was a 9 per cent rise during the year to March 2012 compared to the previous year, while the number killed or seriously injured was up by 11 per cent.

The figures themselves do not necessarily mean that cycling is becoming more dangerous, since it is impossible to answer that question without analysing them alongside data for distance travelled by bicycle, notoriously hard to come by.

However, another double-digit percentage increase in the number of cyclists killed or seriously injured is bound to be a cause of alarm for cycling and road safety campaigners.

National cyclists' organisation CTC pointed out that the weather had been milder in the first three months of 2012 compared to the same period a year earlier, but said that it was unlikely that an associated rise in the number of people cycling explained the incrase in casualties.

Roger Geffen, CTC's campaigns and policy director, commented: “Following Britain’s Olympics successes, there is a wonderful opportunity to encourage more people to cycle, yet people will still be deterred while they continue to hear news of rising numbers of cyclist casualties.

"After a decade of modest but steady improvement in cyclists’ safety, things now seem to be going into reverse. This may well be due to previous ministerial rhetoric about “ending the war on the motorist”, with consequent cuts to roads policing budgets and driver awareness campaigns.

“If we want to see an Olympic legacy of more people cycling more safely, the Government must now pay far more attention to tackling the fears which deter people from cycling: traffic speeds, bad driving, hostile roads and junctions, and lorries.  We must aim for more as well as safer cycling, not just for the good of our health, but also our communities, our environment, our economy and our wallets.”

Simon Best, chief executive of road safety charity IAM, said: “It is unacceptable that road deaths and serious injuries have risen for children [up 9 per cent], pedestrians, motorcyclists and cyclists.

“Cutting road safety education, scrapping casualty targets and cuts in council spending all suggest this isn’t a major priority. The government needs to show much greater leadership on road safety.

“Last year’s increase in people killed was a serious warning, but this could be the start of a trend.

“More must be done to get drivers to look out for vulnerable road users. We must have changes to the driving test, greater enforcement and incentives for driver training.”