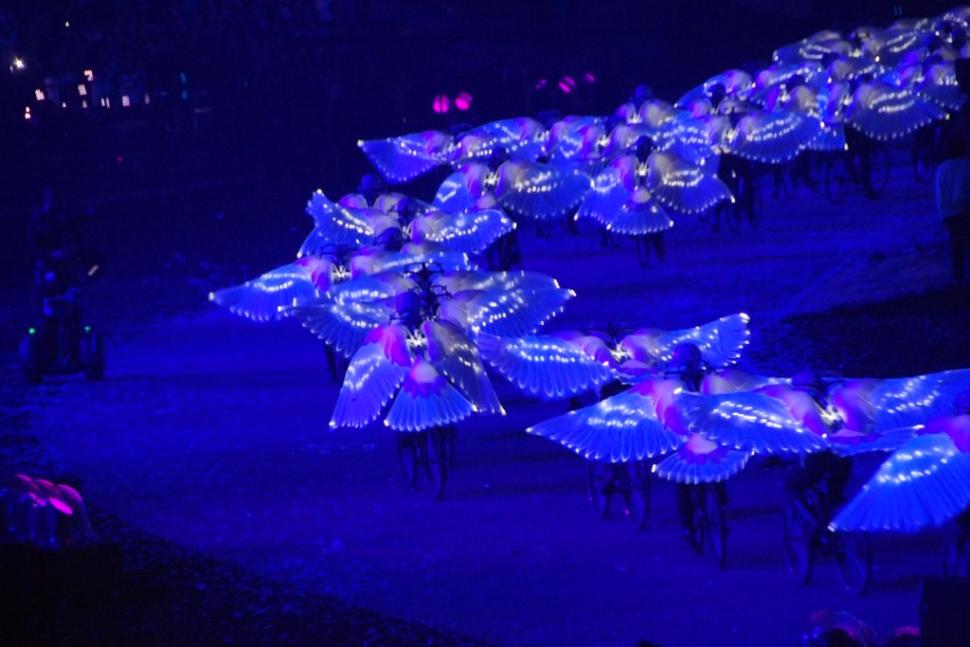 The secrets behind the bikes in the Olympic opening ceremony

We thought they were pigeons, but at least the 'doves' were riding bikes.....
by Sarah Barth

It was a bone of contention when the BMX scene was cut from the Olympic opening ceremony, so for many cyclists it was all about the dove bikes, the winged bikes that had been glimpsed in previews of the Danny Boyle spectacle.

We thought they were pigeons, actually, but it all became clear later on; releasing of doves has been a traditional sign of peace at the Olympics since the end of the First World War.

At the 1988 Games in Seoul, a number of the birds flew straight into the Olympic flame, leading Danny Boyle to stick with the safe option.

75 winged riders were aboard - we can reveal now that the strict pact of secrecy has been lifted - Dawes bikes that had been painted black to be invisible under the wings.

According to Bike Biz, Dawes supplied 85 of its Discovery 101 and 201 bikes to Paul Gage and Phil Magnus from The Bicycle Maintenance Company in Muswell Hill. Dawes's parent company Tandem Group is the official licensee for two wheel product for the Games.

There were a few modifications to the bikes, including a rear mudguard to avoid trapping the wings in the wheels, and the front bikes in each circuit were fitted with a cycle computer so the lead rider could maintain a steady 9mph pace.

The riders were all amateur cyclists who'd responded to a call for volunteers by British Cycling. They were dressed all in black, apart from a white cycle helmet and backpack-mounted white wings, that incorporated LEDs that were controlled via a handlebar switch.

It's not clear whether the helmets were an aesthetic or safety-conscious decision.

The rider-controlled lights meant that riders who got into difficulties could 'go dark', switch off the lights and ride off into the sidings to avoid holding up the display.

Andrew Dowden, 52, a barrister from Pimlico, south west London, who was one of the two lead out riders, told the Telegraph that  the riders had received an email from the creative team just after the finish of the ceremony.

He said: “I think it went completely to plan and without mishap. They were just so happy and I am sure they would have said if there had been anything.”