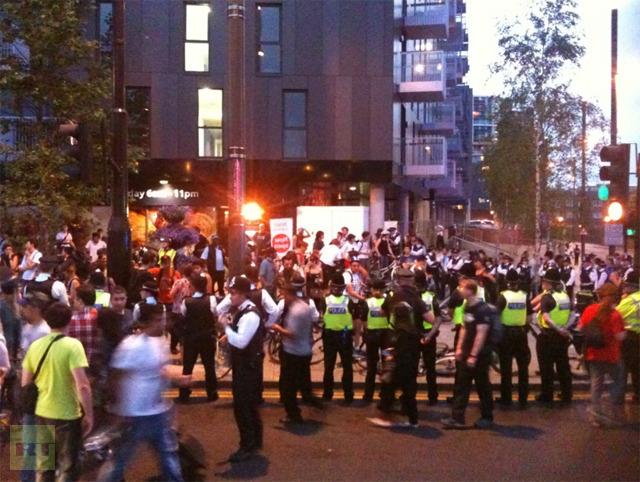 More than 100 cyclists were arrested last night on the outskirts of the Olympic Park following a scuffle between police and Critical Mass riders.

Riders complained they were being kettled at around 22.30, as the Olympic opening ceremony was underway in the main stadium.

The Metropolitcan Police did not respond to claims of kettling when asked by the BBC, but said two groups had been detained - the first on Bow Flyover and the other in Warton Road, Stratford, for public order offences.

The arrested cyclists' bikes were driven away in buses.

Here's a video, allegedly showing the police dealing with a protester who claims to be disabled.

Kerry-Anne Mendoza, 31, who describes herself as a campaigner and writer, told the BBC: "We were cycling down the Bow Road and the police directed us down a cul-de-sac.

"Then they kettled us in there. There is a line of police cars and vans behind that."

She added: "They have not communicated with us or told us why we are being held here or when they will let us out."

Critical Mass rides are monthly protest rides, which are usually held peacefully in conjunction with the police. Hundreds of cyclists ride together, slowing traffic in central London.

Although this month's ride had not been billed as an anti-Olympic ride, Critical Mass does not have an explicit agenda, and discussion on the message boards contained debate as to whether the ride was a protest against the Games.

Before the ride, the organisers warned cyclists they might need to be 'peacefully' assertive in the face of stronger than usual police presence.

The website said: "Most London cyclists will know about the regular monthly Critical Mass ride this evening. Many will also know that the police seem concerned about it, because of all the Olympic traffic," it stated. "It might be assumed that, as usual, the mood of Critical Mass will be to peacefully assert the right of cyclists to travel safely wherever they want in London. But in case the police – who normally leave Critical Mass alone – were to decide to intervene this month, it would be good to have lots of people prepared to be peacefully assertive."

The Metropolitan Police had already warned riders to stay south of the river.

and warned riders to say off the Olympic Route Network:

"Participants must not enter any part of the ORN #criticalmass #protest"

Joel Benjamin, who has been on a number of Critical Mass bike rides previously, told the BBC there were 400-500 cyclists who met on the south side of Waterloo Bridge.

"Usually there is a light police presence," he said. "Today there were far more police than I've seen before."
'Celebration of cycling'

He said police used a sound system to tell cyclists there were restrictions placed on the ride but not what it might mean if they breached them.

"Basically, they didn't want us to go north of the river. The police had put a roadblock stopping all traffic going north."

"I guess there were people there who are against the Olympics, but Critical Mass is really a celebration of cycling, there was no need to get so heavy handed. "

On Twitter, one user referred to the cyclists taking part in the Olympic opening ceremony, writing:

"While doves on bikes circling the #Olympic track, peaceful #criticalmass cyclists attacked & arrested.Which version of Britain do you want?"

Later on, the morning after the arrests were made, another wrote:

"20 #criticalmass arrestees still waiting to be processed, having been held on a bus all night, they've had no food. Completely disgusting."

Were you on Critical Mass last night? What do you think of the arrests?