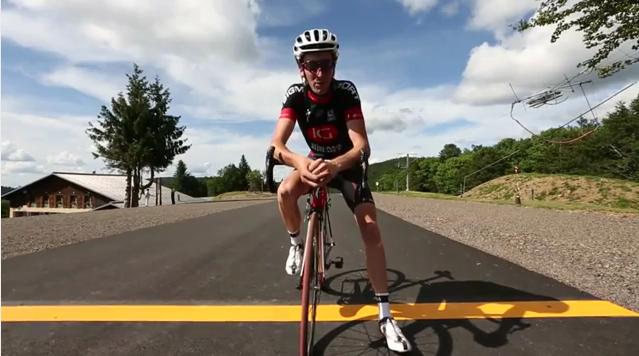 We really enjoyed the Giro d'Italia video previews of key stages put together by IG Markets Cycling, so it's great news that they are doing them again for the Tour. First up, Team IG-Sigma Sport's Daniel Lloyd undertake a recce of tomorrow's stage, the first climbing stage of this year's Tour. 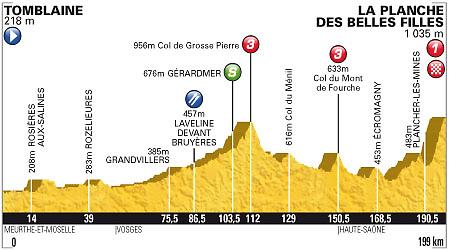 Stage 7 is one of the most eagerly awaited of this year's race, featuring one of just three summit finishes in the 2012 parcours, with maillot jaune Fabian Cancellara saying yesterday that he had no hope of holding onto the overall lead on what he dubbed the 'Planche of the sore legs.' That's something Dan Lloyd agrees with, and he suggests a couple of likely scenarios for how the stage might develop and who will end the day in yellow.

The stage will provide a testing end to a first week of the race that has perhaps been tougher than expected, including a brutal Stage 3 on Tuesday into Boulogne-sur-Mer. The huge crash on today's stage from Épernay to Metz in which a number of GC contenders thought likley to attack on today's stage has also added to the air on uncertainty. What can be sais is that Saturday's stage is likely to be the first time in this year's Tour in which the GC contenders join battle in earnest. 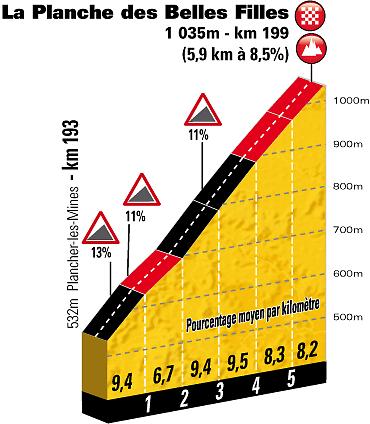 Never before included in the Tour, the 6km ascent to the finish has an average gradient of 8.5 per cent, and officially hits 13 per cent in places - although as Lloyd points out in the video, his computer recorded a 22 per cent stretch just before the climb levels out towards the end. It should be gripping stuff.

Geraint Thomas says: After the crash on Stage 6, pure climbers like Frank Schleck and Robert Gesink will have to try and get time back on Brad and Cadel on a day like today. Nibali missed the crash, but could also look to get some time, thehy;ve got to make the most of it, haven’t they? There’s just a couple of smaller climbs before that, so it’s all down to the last one. Somebody’s got to take it on, and I’d go for a proper climber today, though maybe not one of the main GC guys, perhaps Rui Costa, he’s in good shape.

1
Cyclist arrested after police force rider off M3 motorway
2
Cornwall Council to review “disaster” cycle paths scheme
3
Near Miss of the Day 767: MGIF driver cuts across cyclist at speed on roundabout
4
“Maybe the easiest race I’ve ever done”: Pros enjoy relaxing Giro d’Italia stage six… but could you have kept up?
5
Near Miss of the Day 768: Driver squeezes between two cyclists – but only receives warning letter as rider didn’t “swerve”
6
What happens if you put a giant propeller on a bike? Plus new stuff from Rapha, Campagnolo, Ritchey, Selle Italia, Lezyne + more
7
Just In: check out Classified’s super-innovative Powershift drivetrain
8
CeramicSpeed debuts aero rear derailleur cage