The Team Lampre-ISD riders, including Alessandro Petacchi and Michele Scarponi, are racing this year’s Tour de France on the brand new Wilier Cento 1SR which we checked out in Belgium last week ahead of the Grand Départ.

The Cento1 has been in the Wilier range since 2008 but this model has evolved significantly from that design. 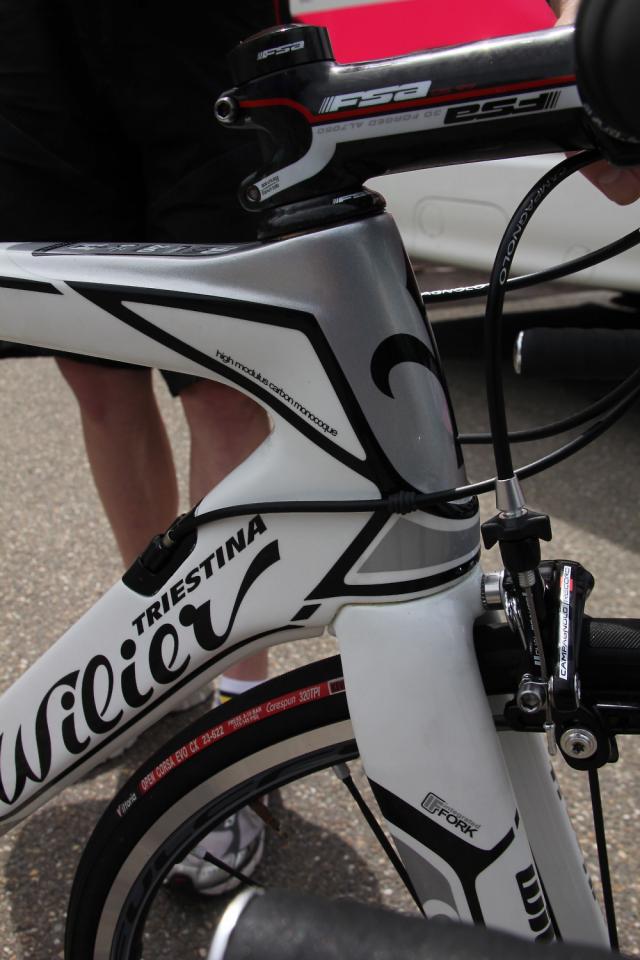 The fork is key to the design, sitting almost seamlessly in there. Wilier reckon this level of integration effectively lengthens the head tube and increases torsional stiffness. They also say that the clean, smooth design improves the aerodynamics and the fork legs are given a Kamm tail (a profile with smoothly tapering sides and then a chopped off rear) to further reduce drag. 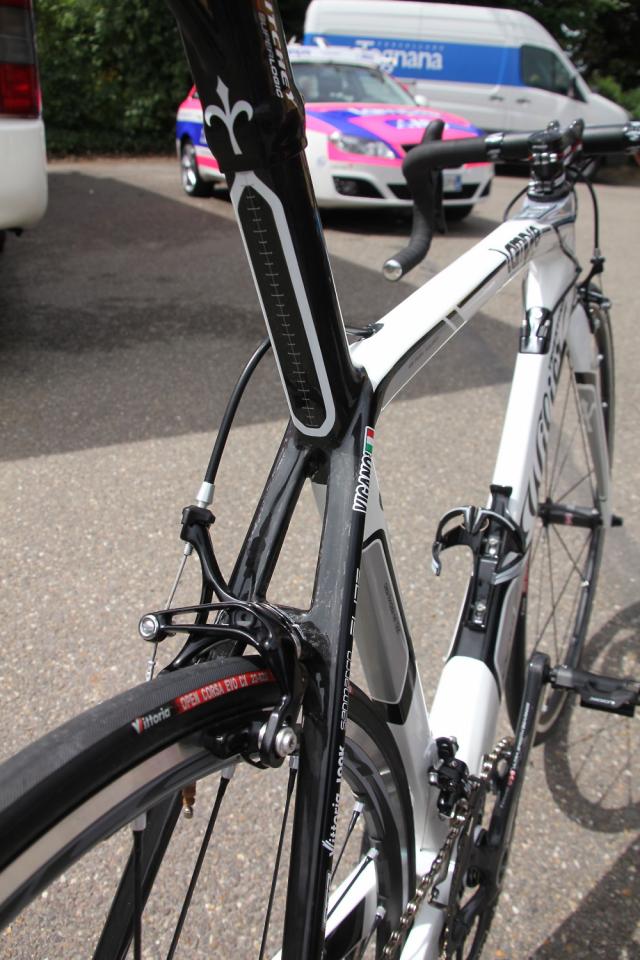 That’s Kamm tail is a design feature that’s repeated in the integrated seatpost. You can see how the sides of the tube curve gently before sharply making way for a squared off rear edge. A lot of brands have moved away from integrated seatposts, largely because they’re a little less practical than a standard design. It can make transporting your bike a bit more difficult and chopping the seat post down might limits the number of possible buyers if you ever want to sell your bike on. But Wilier believe that an integrated post – with a Ritchey mast on top in this case – is the best option for both stiffness and comfort.

Wilier use the BB386EVO standard for the Cento 1SR’s bottom bracket, which is the oversized standard they developed along with component manufacturers FSA for increased stiffness and efficiency. That leads out to some huge chainstays that are asymmetrically designed to take account of chain torque. 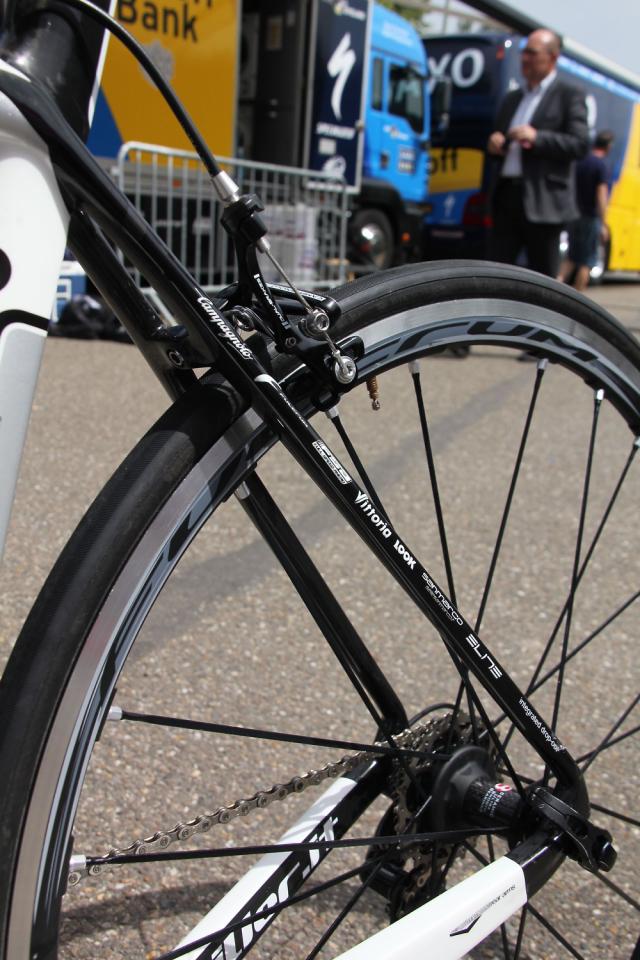 The seatstays, in contrast, are pretty skinny, and they’re flattened down so they’re wider than they are high. The idea is to maximize comfort while retaining stiffness… or, in other words, to provide lateral stiffness and vertical compliance which is, as you’ll doubtless know, something that every frame manufacturer harps on about at any opportunity. 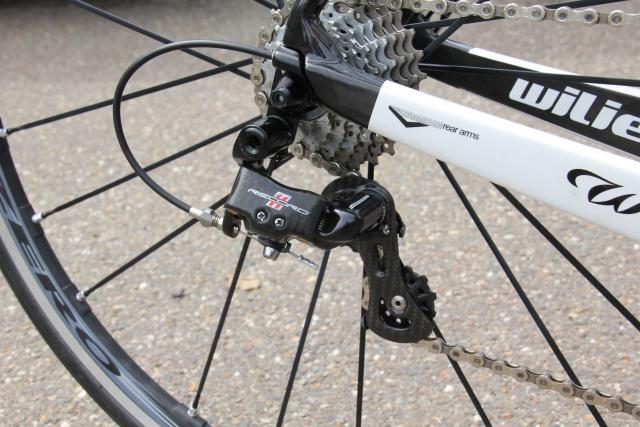 Wilier have come up with a new interchangeable dropout design that can be swapped over according to whether you’re using a mechanical or an electronic shifting system. As you can see, this one’s mechanical. The opening for the cable to exit above the rear mech is large and Wilier say that it makes for easy maintenance. 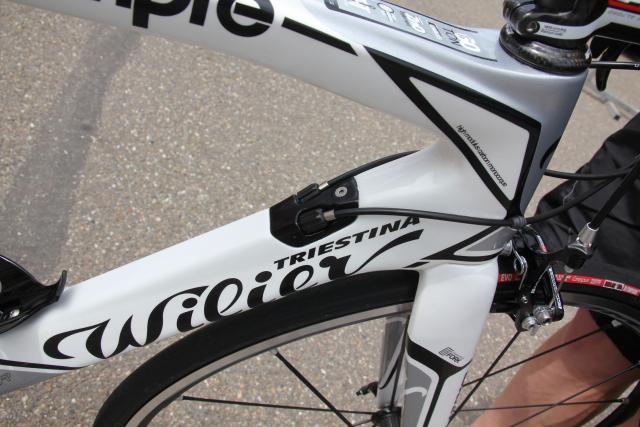 Back towards the front of the bike, Wilier use a really neat cable guide plate with integrated adjusters to take the gear cables inside the frame; it sits flush with the top of the down tube. If you use a mechanical system, you can tune your gears with barrel adjusters that are incorporated into the design. It has to be one of the cleanest-looking solutions out there.

Hidden away underneath the bottom bracket is a cable guide cover that’s also integrated into the frame. You can remove the bolted in guide to reveal a large opening, so getting the cables through should be simple enough. The guide takes the front mech cable smoothly through the frame without any sharp angles that would impede the performance.

If you use either a Shimano Di2 or a Campagnolo EPS electronic system, the battery mounts to the underside of the down tube close to the bottom bracket shell.

This (above) is Davide Viganò's spare bike - although most teams rotate their spare and racing frames, by the way. And that’s a Campagnolo Record groupset on there and Fulcrum Racing Zero wheels - non carbon wheels for the spare, the team mechanic explained. 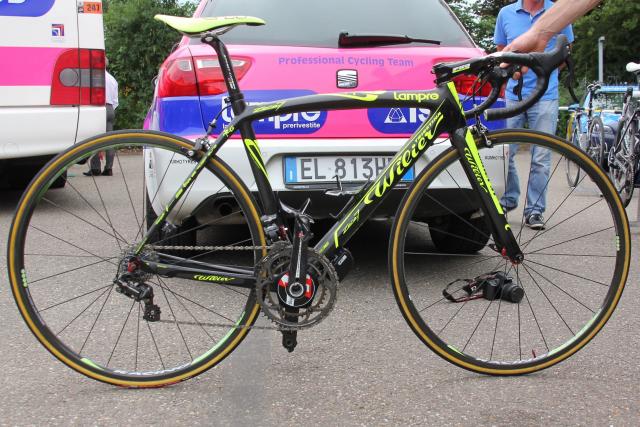 This one is Michele Scarponi's Zero.7 complete with Campagnolo EPS electronic shifting and an FSA Plasma bar/stem combo. 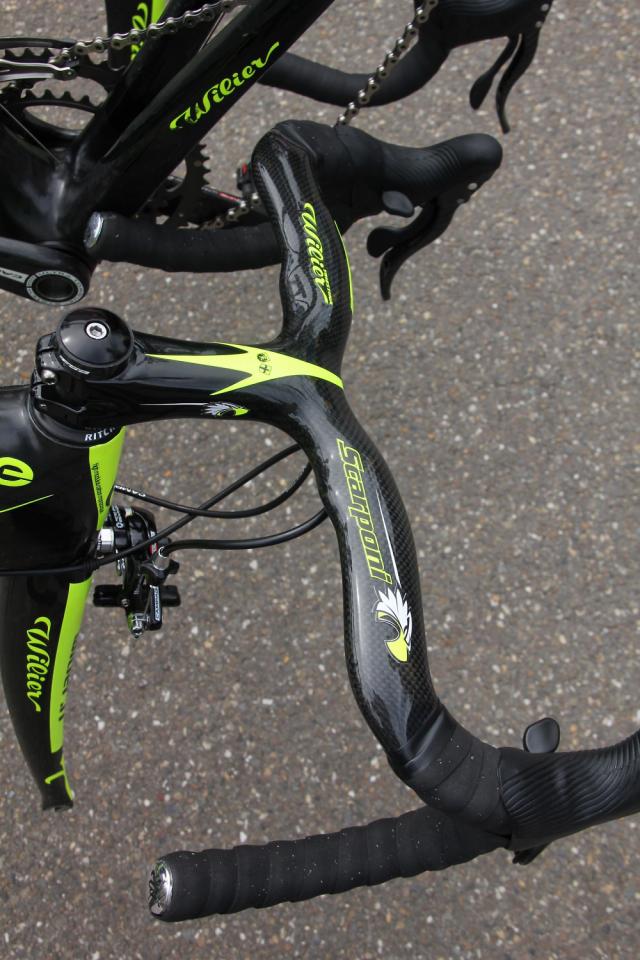 For the full story on the Zero.7, check out our review. If you'd like to know more about the bikes head along to the website of Wilier or the UK distributor, ATB Sales.