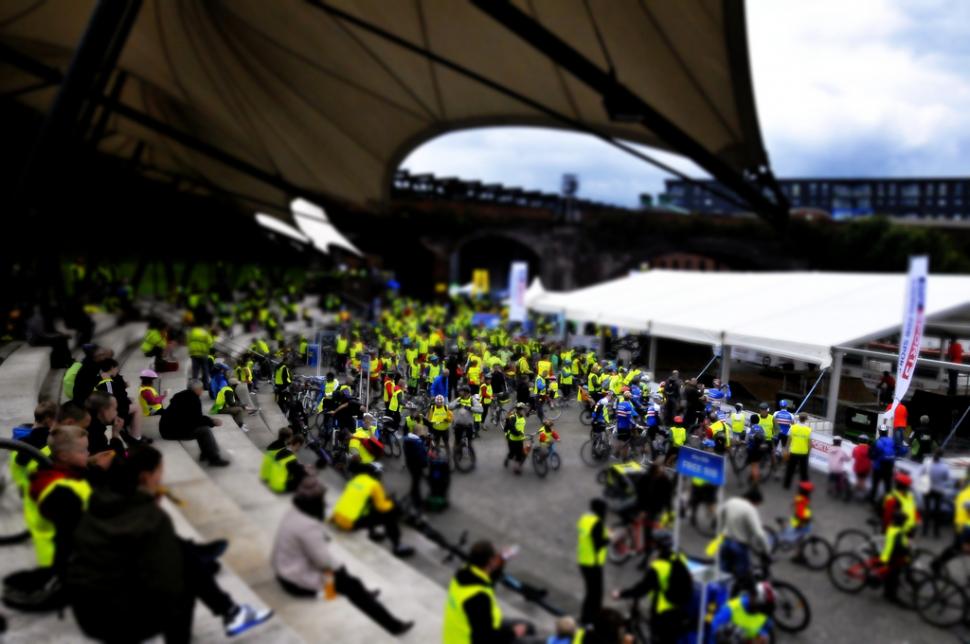 British Cycling says it's on course to deliver Olympic legacy targets for growth in cycling...
by Simon_MacMichael

Figures released by  Sport England as part of its latest Active People Survey show that the equivalent of 81,000 more people in England cycled regularly in the 12 months to April 2012, compared to the previous survey released six months ago. Sport Englands figures come hot on the heels of a Sustrans survey released last week which showed an unprecdented jump in the levels of cycling in the UK.

The jump in the number of people cycling regularly in the six months to April was even bigger - 161,000, but that is partly accounted for by poor figures for the previous six months and we would guess a relatively dry, mild winter.

According to British Cycling, Sky Ride and other mass participation events with which the organisation is involved are behind the growth in number of cyclists - Sport England's figures show that London and the South East and Yorkshire were the areas that drove growth - so it would be interesting to see how Sky rides and other mass participation map against those areas. The South West also showed a slight rise in participation over the last 12 months, but both the North East and North West showed falls in the levels of regular cycling over the last 12 months - although both showed slight increases over the last six months.

The growth in regular cycling is ahead of the target that Sport England had set British Cycling of getting 150,000 more people cycling regularly between 2009 and 2013.

Cycle sport's governing body claims that female-friendly initiatives such as Breeze which is aimed specifically at enouraging more women to ride bikes had led to an increase in the number of women cycling regularly – 54,000 more did so in the year to April 2012 compared to the year to October 2011, and that growth in participation had also been recorded among people with a disability.

Ian Drake, Chief Executive of British Cycling, commented: “We’re on course to achieve our target of delivering a sustainable participation legacy before the Games thanks to our partnerships with Sport England, Sky and local authorities, without whom we would not be seeing these results today. These successes are also a credit to the fantastic work of our volunteers – at regional, club and event level – thank you all.”

In a statement accompanying the announcement of the figures, British Cycling, which now has almost 50,000 members, with 1,000 people joining lat month, added that 20,000 people now race regularly across all disciplines, with nearly 3,500 competitive events annually, while younger cyclists continue to have a route into the sport through Go-Ride clibs, of which 100 have signed up for the Go-Ride Games this year, described as “a national summer festival of cycling for young people.”

The need for British Cycling to target young people is borne out by the worrying statistic that cycle participation has dropped amongst 16-19 year olds compared with a 2007-2008 baseline, there was also a statistically significant drop in cycling participation levels amongst ethnic minorities.

Sport England defines regular cycling as a minimum of four times per month for at least 30 minutes per ride.

1
Not so Near Miss of the Day 640: Hot chocolate thrown over cyclist from moving car
2
Cyclist dragged 20 metres along road by partially sighted motorist still battling with insurers
3
Cyclist uses Strava to recreate Nirvana's Nevermind album cover
4
Video: Explosion rocks subway after train collides with bicycle thrown on tracks
5
Teenager assaulted because he was seen riding on the pavement
6
"The sight of the MAMIL can be off-putting for those looking in from the outside," says Ned Boulting
7
British Cycling criticised for video showing 'distracted' team coach driving while celebrating win
8
Fox News pundit slams Joe Biden bike ride – but ignores the hundreds of golfing trips Donald Trump took in office