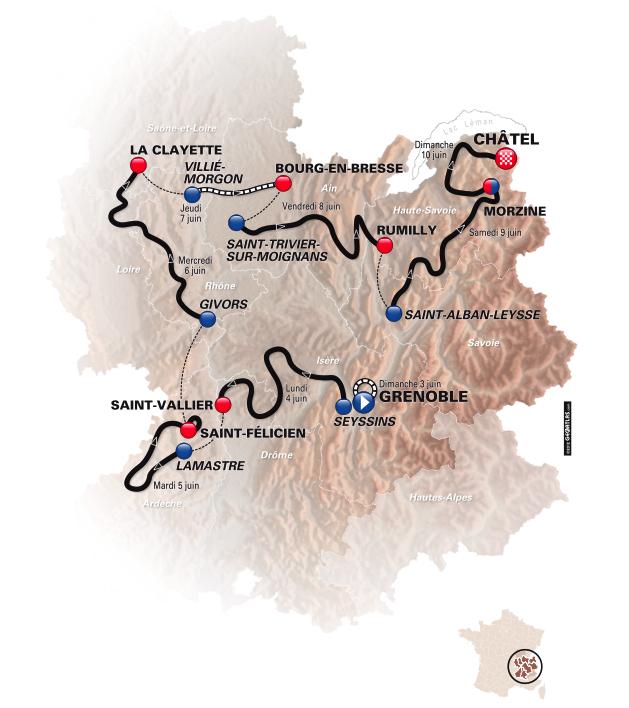 Cadel Evans of BMC Racing, four times a runner-up in the Critérium du Dauphiné, has won the first road stage of this year's edition of the race, outsprinting Jerome Coppel of Saur Sojasun and Astana's Andrey Kaschechkin to the line in Saint-Vallier. The trio had attacked off the front of the main bunch on the day's final descent, 4.5 kilometres from the end of the 187 kilometre stage and held on to cross the line four seconds ahead of the chasing group, including .defending champion Bradley Wiggins of Team Sky, who moves into the race lead one second ahead of Evans.

Overnight leader Luke Durbridge of Orica-GreenEdge was in a second group several seconds behind. With less than four weeks to go until the Tour de France begins, Andy Schleck looks out of form, being dropped on that final climb, while last year's winner of the polka dot jersey in the Tour, Samuel Sanchez, struggled to complete today's stage after crashing early on in the stage.

On the way down from that sixth and final climb of the day, the Category 3 Cote de la Sizeranne, it had looked like the stage win would be contested by those sprinters such as Omega Pharma-Quick Step's Gerald Ciolek, Edvald Boasson Hagen of Team Sky and Astana's Borut Bozic.

The last members of the day's breakaway, which had included Giovanni Bernaudeau of Europcar who targeted the mountains points on offer on those climbs peppered througout the stage to move into the polka dot jersey this evening, were swept up with seven kilometres to go as the main field came back together, although missing Schleck who had looked in difficulty on what was by no means a taxing ascent for a non-climber, let alone someone who has consistently challenged for the overall win in the Tour de France.

Afterwards, RadioShack-Nissan team manager Johan Bruyneel, whose relationship with both Andy and Frank Schleck is reported to have deteriorated badly in recent weeks, tried to put a positive spin on the younger sibling's struggles today.

"I didn’t expect to see that scenario at the end, but I’ve spoken with Andy," he revealed. "What’s clear here is that he’s had a lack of competition. We know that. We come here with different intentions other than to win.The main goal is to see how Andy is going in the mountains. With a lack of competition in his legs, in theory we will see him getting better this week and by the end of the week we can see where he really is. It’s definitely better if things like this don’t happen but it isn’t a disaster.

"Everyone comes here looking for something different. Evans wins the stage, Wiggins takes the jersey, those are confirmations for them. We still need to find our confirmation. The Tour starts on the 30th of June so there is still awhile to go and the mountains of the Tour are even further away. It’s a little bit worrisome but we’ll see during the rest of the week,” he added.

Schleck wasn't the only big name to ecounter problems today. Samuel Sanchez of Euskadi-Euskaltel and FDJ-BigMat's Pierrick Fedrigo were involved in a crash 47 kilometres into the 187-kilometre stage from Seyssins. There were suspicions that Sanchez had broken some ribs in the incident, but with team mates dropping back to help him, he battled on to complete the stage, albeit nearly half an hour after the leaders.

Also suffering a crash today was Garmin-Barracuda's Dan Martin, who came down heavily after apparently hitting a shallow kerb on a roundabout some 30 kilometres out; at first, it looked as though he had suffered collarbone damage, although the Birmingham-born Irishman was able to remount after a couple of minutes and completed the stage.

Commenting on the move that led to his win, Evans said: “It was a technical descent, quite narrow as well. I saw an opportunity there to go clear off the peloton. You have to try something when you’re in that situation. Normally, it was favourable for the peloton to catch us but they didn’t.

"I’m a racer, I like to compete and do such moves," he continued. "Things have to go your way if you try but you have to try something somewhere… This shows that the work I’ve done at training has been good but there’s still a lot of work to be done until the Tour de France.”

For Wiggins, meawhile, there were mixed feelings about getting into the race lead today. “It’s funny how times change! Before I’d say, yes, I’m happy to take the yellow jersey. Now I can’t say I’m disappointed but I’d like to ride the time trial on Thursday with my Sky skin suit, so I’d prefer to lose a few seconds by then.

"What happened today is just a sign of how far we’ve come ," he added. "We took the responsibility of the race anyway because GreenEdge didn’t want to completely assume it. The end of the stage was a strange run-in really. There has been a couple of crashes and three guys rode away in the downhill and stayed away.”

Should he stay in yellow until the completion of the race on Saturday, that also means that today will have been the last day that Wiggins will have raced in the national champion's jersey he won in Northumberland 12 months ago.