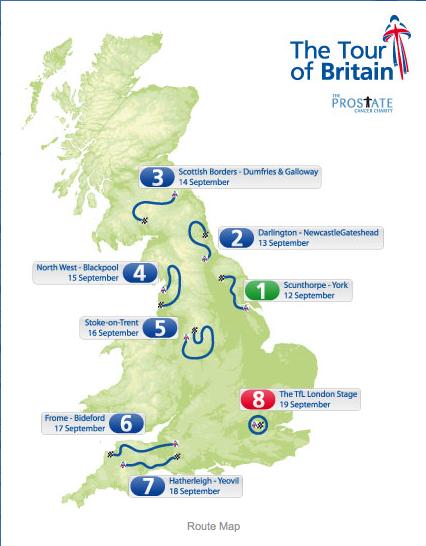 Nine teams confirmed for this year's Tour of Britain

The Tour of Britain today announced that nine teams have so far confimed they will be taking part in this year's race which will starts in Scunthorpe on September 12th and finishes in London on the 19th. Sixteen teams in total will contest the race.

The nine confimed teams are:

Columbia HTC, Agritubel and AG2R will be the names to catch the eye, all three are currently racing in the Tour de France, Barloworld too have grand tour pedigree and although they missed out on a wild card entry to this year's Tour they did ride the Giro and have in Chris Froome have one of Britain's most promising riders in their ranks.

Columbia HTC are without doubt the biggest name in the hat so far and in Mark Cavendish have arguably got Britain's hottest cycling property in their ranks also. Cavendish has ridden previous Tours of Britain and given that he will have ridden both the Giro and the Tour there's got to be a reasonable chance he'll be riding this one too. The teams taking part will announce their rider rosters for the event closer to the start date.

“It has always been our desire to include domestic teams on The Tour of Britain, as we see these emerging cycling teams playing an essential part in helping to develop the sport in this country.”

“As a British-based team, it’s great to be racing against some of the best teams in the world on home turf. Thanks to The Tour of Britain, our team now has the chance to prove ourselves to an international audience and hope to inspire the younger generation to take up cycle racing.”

The Tour of Britain is an elite international cycle race and has been given 2.1 status by cycling’s world governing body, the UCI, as such it has been able to attract former World and Olympic champions and Tour de France stage winners and yellow jersey wearers. The race is Britain's biggest free to attend sporting event with over a million people watching its progress every year.