Much of the national media is this morning reporting the ‘fact’ that more than half of cyclists jump red lights, based on a misleading headline in a press release from the Institute of Advanced Motorists (IAM) that misinterprets the results of a online survey conducted by the road safety charity. The sensationalist nature of the press release’s headline and failure to properly analyse the data from what is itself a questionable piece of research before putting it into the public domain has provoked an angry reaction and fears that the ‘statistic’ will further reinforce the widely held perception that cyclists are a law unto themselves.

The research was conducted via a self-selected survey on the IAM website, conducted using Survey Monkey, that asked several questions of cyclists regarding their behaviour . It’s the claim that 57 per cent of cyclists jump red lights, as well as one that 73 per cent ride on pavements, that today is receiving attention from media outlets such as the Daily Mail, which has the story on the front page of its website, and BBC Breakfast.

Breaking down the multiple choice responses to the question in the survey according to figures supplied by IAM to road.cc presents a rather different picture, however. 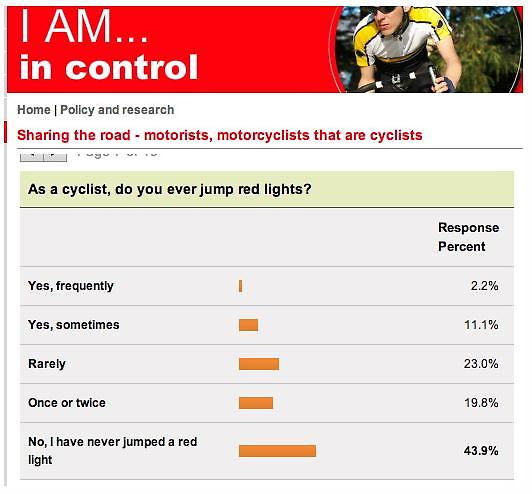 IAM poll question: The slight difference between figures in pic and IAM's quoted figures is because the poll was left open after it was supposedly closed and Carlton Reid of Bikebiz answered the questions

In other words, 13.3 per cent of respondents to the survey claimed to jump red lights either frequently or sometimes; the remaining 86.7 per cent at most do so rarely and fully half of them state they have never jumped a red light, which puts the findings of the survey in a rather different light.

The press release, embargoed until 0001 today, was sent out yesterday morning under the attention-grabbing heading “More than half of cyclists jump red lights” and was immediately queried with IAM by road.cc, Carlton Reid, executive editor of trade journal BikeBiz, and others.

By lunchtime, BikeBiz had decided to break embargo and publish a story on the press release, saying it was doing so “in order to prepare cyclists for the hate they'll receive from the mainstream media tomorrow.” With a pre-emptive damage limitation exercise in full swing, Peter Walker in the Guardian Bike Blog and Kaya Burgess in The Times had also challenged the survey’s findings.

Besides the misrepresentation of the responses - as well as the discovery by Reid that the survey had also found that 32 per cent of motorists admitted jumping red lights, not contained in the press release - the nature of the survey itself, conducted via Survey Monkey, was also queried, with self-selected online samples notoriously less robust as a form of research than random surveys conducted by professional market research organisations.

That point was highlighted by the website Full Fact, which said: “If this is indeed the case, that means that not only could any visitor to the website – cyclist or otherwise – have influenced the headline result, but also there would have been no weighting to account for participant attributes such as age, gender or location.”

We at road.cc queried the findings of the poll, and the way in which they had been reported, with IAM, including pointing out that the consequences of a motorists running a red light were potentially much more serious than those of a cyclist riding through one, questioning why red light jumping by other road users were not discussed, and also highlighting that a sent according to a report in to cycling casualties carried out by the Transport Research Laboratory for the Department of Transport, only 2 per cent of cycling casualties were the result of red light jumping cyclists.

We also asked the IAM, which among its activities provides cycle training and has a class of membership specifically aimed at cyclists, whether it had any concerns “that the figures quoted in the press release about this poll may well stoke anti-cycling comment from some sections of the media and reinforce the negative stereotypes of cyclists that are held by some media commentators and by a section of the nation's road users?”

The reply we received provided a regional breakdown of survey results, which we had requested, as well as the breakdown given earlier with of how that 57 per cent headline figure had been arrived at. The reply was signed off with the words, “These should hopefully answer your points.” Needless to say, it didn’t.

Reacting to the survey, national cyclists’ organisation CTC said:  “All road users, including drivers and motorcyclists, break the law. In a similar self-reported survey drivers admitted to routine lawbreaking as half of respondents admitted to using mobile phones while driving (mostly illegal hand-held). Another found that 82% ‘sometimes or frequently’ exceed the speed limit.

Roger Geffen, CTC’s campaigns director, said: “As road users we would like to see road traffic laws be enforced for the safety of everyone, but let’s not forget that the risk imposed by cyclists is minimal when compared to red light jumping drivers.”

He added: “Of pedestrians injured in London in a collision caused by red light jumping only 4% involve cyclists, whereas 71% occur when a car driver jumps a red light and 13% when a motorcyclist does. As an organisation representing those two road user groups, CTC suggests IAM ought to call for more road traffic policing to enforce traffic laws, rather than highlighting red light jumping by cyclists.”

In its response to the survey, British Cycling did not directly address the shortcomings of the survey or the misrepresentation of the results, but instead highlighted reasons why some cyclists felt the need to jump red lights in the first place.

Its Director of Policy and Legal Affairs, Martin Gibbs, said: “All road users must adhere to the Highway Code and traffic enforcement laws and of course that includes waiting at red lights and not cycling on pavements. But this survey clearly shows that instances where people bend the rules tends to be on stretches of road where they don’t feel safe on their bikes.

“Some junctions are so badly designed that people on bikes feel they have to choose between riding legally and riding safely, and this urgently needs addressing. Cycle provision and cycle safety must be designed into roads and junctions before they are built, and existing problem junctions re-engineered, so we create an environment in which people can cycle safely and no-one feels excused from obeying the law.”

At a time when cycling has become an issue discussed at national level, thanks to the efforts of cycle campaigners and the high-profile Cities fit for Cycling initiative from The Times newspaper, the IAM poll, and the way its findings were communicated to the media and in some cases reported without question, is likely to reinforce anti-cyclist views held by many.

That is perhaps epitomised by one comment to the Daily Mail story and its reporting that 57 per cent of cyclists jump red lights, which simply says: “And the other 43 per cent are lying.”