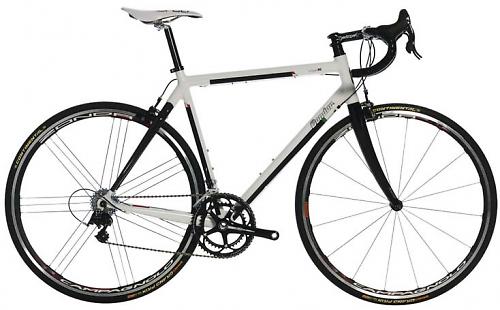 Condor have announced the new Italia RC model. It's an aluminium frame with carbon stays and fork for an affordable made-in-Italy race experience. Condor says it's perfect for perfect for "sprinting, climbing and performance riding," and given that the geometry (based on the Rapha Condor Team Leggero bike) is race-oriented, that's probably accurate.

Condor told us: "We use a super lightweight triple butted aluminium tube and because the frame is hand made the tig welds are very neat and then we linish (effectively polish) to keep the welds subtle and neat."

The bike can be built with SRAM Apex, Mavic Aksium wheelset, Continental tyres, Deda finishing kit and carbon pin for £1435 or it can be built as per the picture with Campagnolo Veloce groupset for £1,330 and Campagnolo wheelset. All prices include a custom fitting.

With Condor, you choose the frameset and then build the bike to your own spec, so if you wanted a super wide handlebar, red bar tape and red tyres and a red saddle on this model, it wouldn't cost you any extra to get yourself a completely unique bike.

The Italia brand has some heritage too: the original frame was designed in 1948 to be a functional race bike, equipped with mudguard eyes and pump bracket, the bike was affordable and an instant hit. It was the first bicycle model from Condor, and today's Italia collection includes a step-through tourer and a standard Italia, slightly more suited to commuting and sportive riders with mudguard eyes and clearance for 28c tyres.

The Italia RC is £549.99 including carbon fork, seat clamp and integrated headset - and it's made in Italy. 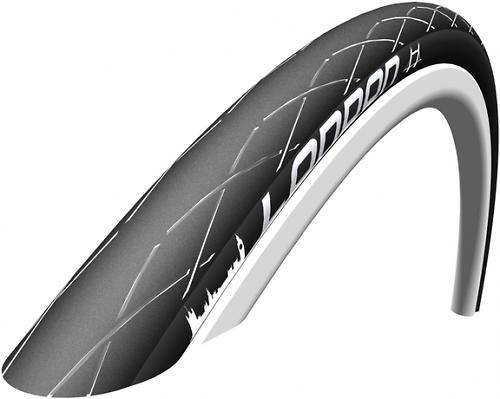 Not officially to be unveiled until September's trade shows, Schwalbe put on a sneak preview of their 2013 tyre offering in London.

The Big Ben is not unlike the Big Apple, in that it's a fat tyre that comes in in four colours: black, cream, brown and grey. It has a slightly deeper tread than the Big Apple, however, and a high density carcass for puncture-proofing (the black comes in at a tough 67 epi, the coloured at 50epi).

Also on show was the limited-edition 'London' range, which is available now. The tyres are the standard Marathon Plus commuter, which offers chunky pothole cushioning and puncture protection, Durano Plus for the roadies and Marathon Plus ATB, but all feature a ‘London’ reflective label with silhouetted landmarks – Tower Bridge and the Houses of Parliament.

More details should be available soon from Schwalbe When we first heard about Tree Piece's wooden bike helmets, we thought they sounded a bit silly. Then we saw them, and I think you'll agree, we think they're rather beautiful.

Begun in Oregon by Dan Coyle, an outdoor adventure coach, Tree Piece started out as a project to make whitewater kayaking headgear. The helmets worked; as Dan says: “I almost drowned a couple times but my helmets never let me down in the numerous beatings I took while upside down in some nasty rapid.”

Dan's mates liked them, he decided to branch out, and here we are with a collection of conker-shiny lids that make your head look, well, a bit like a conker actually.

Most of the helmets are made from organic salvaged Douglas Fir, which is sustainably harvested and then dried in a kiln, but other hardwoods are available on request. They're carved from solid blocks of wood, so they're tough, but cork inners see to the padding inside. The high shine outer is protected with a polyurethane coating. The helmet weight is a surprising 500g or so. Probably more at home on your fixie than your carbon whippet (though don't let us be the ones to stop you), these SE headset spacers bring a touch of yesteryear to your front end. 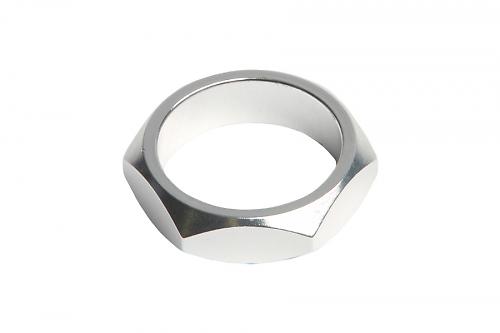 Made of 6061-T6 alloy and available in five colours, how you style them is up to you. Madison is now UK distributor for the K-Edge Chain Catcher which should mean wider availabilty for the 'insurance policy' devised to help Kristin Armstrong win gold at the 2008 Olympic Games. While it probably wasn't the only reason for the win, it did prevent a race-ending chain derail, and the pro riding world took note - now the K-Edge Road Chain Catcher is used by professionals in the Olympic Games, World Championships, Paris-Roubaix, Giro DíItalia and Tour De France.

It fits all braze-on mounted and clamp style front derailleurs, weighs just 10g and significantly helps shifting performance, as well as protecting your frame from chain damage, by reducing the chances of you downshifting over your small chain ring and allowing the chain to derail onto the frame.

Also from US brand K-Edge are some high precision CNC Machined 6061 T6 aluminium mounts for your GoPro,a universal mount, a handlebar mount, a boom handlebar mount, and a saddle rail mount, meaning that your epic ride can be captured for posterity from every angle.

Prices are to be announced soon, but they're very sturdy so expect to pay more than the minimum.

All K-EDGE products come with a Lifetime Guarantee – if you break it, they will replace it. Babici is one man's attempt to bring European road cycling glamour to Australia.

After designing a jersey for a local crew of riders, branding guy Kev Babakian realised he was pretty good at it, and set about creating a collection of race inspired gear without all the logos.

Surprisingly, Babici is the only consumer facing cycling apparel brand from Australia, but even in a crowded global market the kit stands out for being slick and clean. Fabrics are Italian-imported and prices reflect that at around £115 for bib shorts and £95 for a jersey.

What's impressive is how the brand goes the extra mile for quality - Babici teamed up with Italian chamois manufacturers Dolomiti from Trevisio Italia, to come up with a new type of pad that gives more perineal protection. The new chamois launches next month and we're keen to try it out.

Road.cc users can buy all Babici kit at 10% off by using the code roadcc at checkout. A lightweight, slimline, dockable iPhone case, the Formula 4 has an aerospace-grade carbon backplate for featherlight protection (and bike matchiness!)

The bottom cap flips off to give you access to all the connections, a nice touch - which you’d expect for £34.99 for a phone case. As seen on the new Team Sky Jaguar XF Sportbrake, this limited edition version of Thule Proride 591 racks secure your bike at roof height with a single turn of one knob, making them a pretty elegant solution to the tedium of lugging your bike around on four wheels. It’s easy to adjust the carrier for different sized bikes, by sliding the plastic wheel clamps backwards and forwards, and once you’ve done it a couple of times it’s close to a one-handed job. Thule tell us that this is the only roof mounted bike carrier on the market with a capacity to carry bikes up to 20 kg, and what’s more, it’s One Key System compatible. That basically means that you can replace the locking cylinders to use one and the same key for all your Thule products - useful if you don’t want a huge bunch of keys clunking about in your jersey pocket. 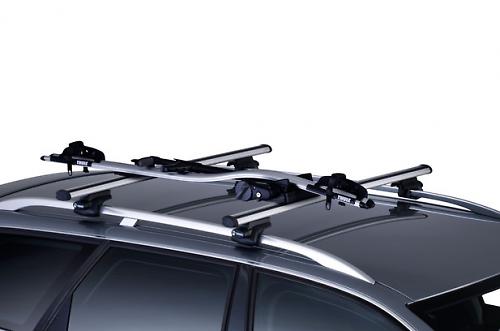 And the limited edition aspect of all this? Well, Thule have produced a range in matt black - apparently it's the first time they've produced anyting in a colour other than their trademark silver, which we think looks pretty good, and the rack fits most roofbar sizes up to 60mm width. We’ll have a full product test here soon.