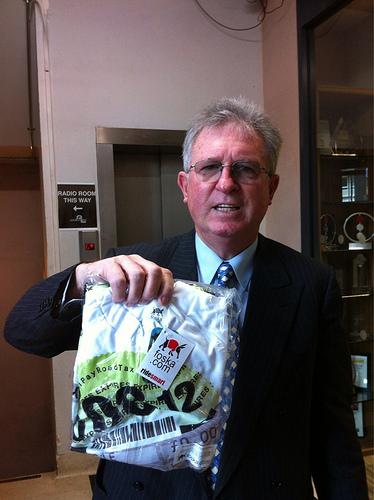 Addison Lee to give its drivers cycle awareness training

Addison Lee the minicab company whose chairman John Griffin's comments on cyclists infuriated many last month and led to calls for a boycott of the minicab firm is to give its drivers training to help raise their awareness of cyclists. The training will be provided by David Dansky of London-based Cycle Training UK.

In his column for the company magazine Add Lib Mr Griffin asserted that "It is time for us to say to cyclists, ‘You want to join our gang, get trained and pay up’,” the irony that those comments will result in more training for Addison Lee drivers will not be lost on many of those angered by Mr Griffin's words.

The news of Mr Griffin's two-wheeled conversion and the programme of driver training came when I Pay Road Tax founder and BikeBiz executive editor Carlton Reid interviewed Addison Lee’s PR manager Alistair Laycock at a meeting at the firm’s offices in Camden on Monday. Mr Griffin was given an I Pay Road Tax cycling journey, underlining the point that cyclists pay for the roads too - as does every taxpayer in the land.

Reid spent an hour and a half with Mr Laycock – who in a comment to an article about the meeting on the I Pay Road Tax website he reveals that he has started commuting to work by bike – and who outlined some of the steps the company is taking to repair the damage caused by the backlash to the comments made by its chairman and founder.

Aside from driver training the company is also considering installing front-facing video cameras in its vehicles to record journeys, which could be used to provide evidence of what happened in incidents that lead to a subsequent complaint from a cyclist, potentially showing whether the driver or the cyclist – or, indeed, neither – may have been at fault.

As reported on road.cc two years ago, similar video evidence led to a London window cleaning firm sacking one of its drivers after footage showed that he had deliberately swerved into a cyclist.

Monday’s meeting came after a week in which Addison Lee had seen more than 200 cyclists stage a ‘Die In’ outside its offices in protest at Griffin’s comments, lost a High Court battle to prevent Transport for London to secure an injunction relating to his encouragement to drivers to illegally use bus lane, and had a number of contracts terminated, including one with the Government.

Later the same day, attending the mayoral hustings on cycling jointly organised by Sustrans and The Times, Reid also presented the newspaper’s editor James Harding, a keen cyclist, with an I Pay Road Tax jersey. You can find out where to get your own here.

1
Five cool things coming soon from Specialized, Rapha, Assos, Pas Normal Studios and Vielo
2
How does this work!? Crazy half-wheeled bike concept goes viral
3
Cyclist punched repeatedly by motorist in road rage incident
4
Lone female cyclists are “being targeted”, says former Scottish champion
5
Cyclist killed after being struck by van driver during time trial
6
“How would you like to be on camera now?” Shirtless driver accosts CyclingMikey
7
Near Miss of the Day 790 updated: Cyclist gets ANOTHER close pass from same taxi the day after punishment pass
8
UCI “kindly requests” that riders stop using race number sleeves