Supercars and bicycles don’t always appear to go hand in hand, but Swiss bike manufacturer BMC has announced a collaboration with Lamborghini to produce a ride that would walk any beauty contest.

It’s sexy alright, in matt black with a red shiny seat-tube featuring the Lambo decal. Red hoods and Di2 finish the look - it’s not one you’ll leave chained up in the supermarket car park.

Chances are that you’ll never actually see one in the flesh: the run is limited to 30 bikes, each costing €20,000, available from June in Lamborghini dealers and BMC boutiques.

But imagine if you will, the saddle and handlebars, covered with Lamborghini suede, the airbrushed paint job in Argos Orange, the exact shade of the Aventador LP-700-4...

What’s more, the bike is a BMC impec, a bike they say is ‘handmade by machines’. What that means is that the carbon-fibre is woven together strand-by-strand by robots, rather than using
the more common lamination process. The resulting tubes are joined with injection-moulded composite lugs.

BMC bikes have a reputation for being a stiff ride, but the impec gets round that with its low seatstays, allowing the top end of the seat-tube to flex. 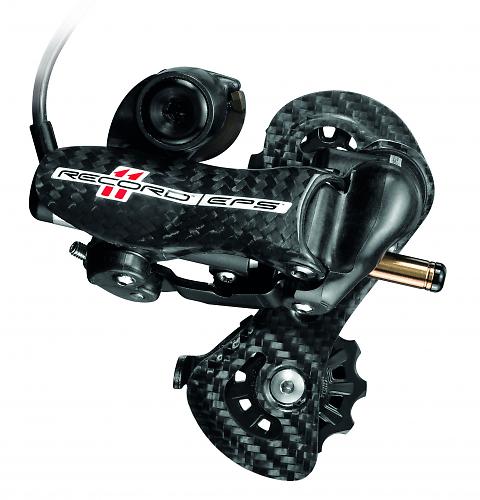 The long-awaited EPS (Electronic Power Shifting) versions of Campagnolo Record and Super Record are now filtering into shops through importer i-Ride, according to i-Ride's Tom Marchment. (It's likely available through other importers too, as Campagnolo has several agents in the UK, but i-Ride is the one we happen to have heard from.)

Tom Marchment estimates the groups will cost around £3050 and £3600 for Record and Super Record, respectively, though he stressed that pricing is up to individual stores. That makes Record roughly comparable to Shimano Dura-Ace Di2 (list price around £3,100) with a premium for the weight-savings of Super Record which boasts more use of carbon fiber and titanium to shed grams.

Our man Mat Brett took a ride on EPS at its launch last year and pronounced it “a silky-smooth setup with several benefits over a mechanical option”. Now you can find out for yourself.

Importer i-Ride has also announced free, compulsory training in the care and feeding of EPS, for dealers. In short, shops won't be able to buy it unless someone has been on i-Ride's course.

More details from i-Ride and Campagnolo. 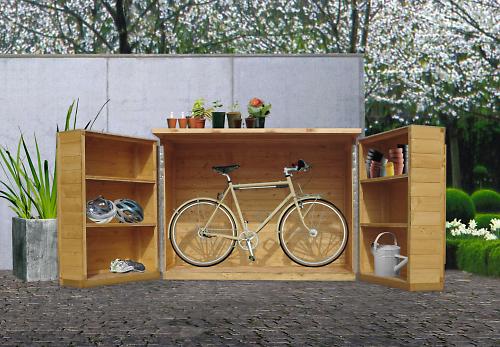 Is it a box? Is it a shed? Actually it’s a pretty handy thing to put your bike in if you have to keep it outside. It’s a waist-height box with room for two bikes, which also has shelves for all your helmets, pumps, tools etc.

ShackUp is a company founded by designers Wayne and Gerardine Hemingway, whom you might be more familiar with from the fashion brand Red or Dead, which started on a Camden market stall and became a household name. They are now all about affordable housing and great use of storage in small places, and you can pick up their wares in your local B&Q.

Both the sturdy wooden Bikeinabox and the narrower Tridoorbikestore (also holds two bikes) are low-level (around waist height) and come flat-packed, with lots of panels and hundreds of screws, so be prepared for some head-scratching. We’re told the instructions are fairly easy to follow. They cost £289.

So if you’ve been told on pain of death never to bring another bike in the house, ever - we’ve just enabled you to buy TWO more. You’re welcome. For those of you who are allowed to bring your bikes indoors, Minoura's new Tancho E’sse offers three different ways to park your bike. According to Minoura it's extremely stable whether you keep your bike horizontally for a quick parking job (it will hold the front or rear wheel) or vertically to get it really out of the way with a small footprint, the front wheel tidily held in place with a foam-covered hook.

The design looks functional, but has a certain minimalist style, and as such is perfect for displaying your pride and joy. Or rack up a few of them in a small space to really maximise storage potential. At around £99.99 they're well-priced for the job. 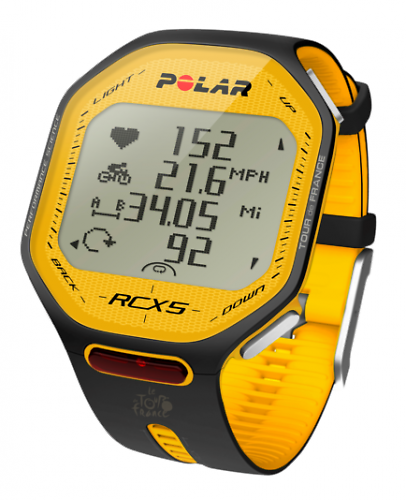 Polar have brought out a new Tour-themed heart rate monitor in time for this year’s race, and it certainly packs an impact in terms of looks.

The RCX5 Tour de France has a slim, bright yellow watch unit, with a huge display that allows the user to configure the data as preferred. The display is flat and although shiny, easy to read in the sun.

There’s also a GPS unit, about the size of a cigarette lighter, that can be worn on the provided armband or popped in a pocket for route review and speed and distance data.

What’s clever about the RCX5 is that, during the beginning of your training session, the ZoneOptimiser evaluates the state of your body, and adjusts your training zones accordingly. So if you’re tired, over-trained, under-hydrated or just feeling a bit iffy, you won’t push yourself too hard. On the other hand, if you’re in peak condition, it will tell you to go for it.

It’s easy to toggle between ride, run and swim settings, and bike speed and cadence sensors are optional, and after your session the RCX5 will tell you how long you should recover before the next one.

If you don’t want to go yellow, check out the more reserved RCX3 in white or black. 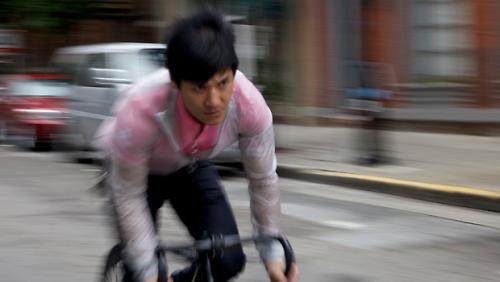 It looks like a race cape, but Rapha tell us that they’ve just channelled the essence of a race cape into their lightweight, packable city jacket. Whatever, it has some pretty neat features.

It’s translucent, so you can show off your jersey, or button-down shirt, or pink Rapha label. It’s cut slim and packs down to nothing (Rapha claim it fits in a jeans pocket), so perfect in showers and totally windproof. Two set-in front pockets stow all your valuables safely. Stretch cuffs keep the warm in, while breathable fabric and laser-cut vents let the clammy out. It’s £150, so let’s have the usual argument down in the comments about how silly that is for a race cape.

Milltag, the design-led custom jersey company, have finally announced their new cap collection. They’re made by Walz in America, and the design is yet to be revealed.

We did glimpse another range by Milltag  at Bespoked Bristol a few weeks ago, this time caps made from some of their colourful, funky jerseys, so keep your eyes peeled, because we think these are going to be good.

Halfords show their colours with accessories We wrote about the new patriotic bikes at Halfords a couple of weeks ago, and they’ve now announced a range of accessories for those of you who are intent on showing your support for Team GB this summer without replacing your ride.

We recommend you don’t wear the whole lot at once.

It’s enough to make your mouth water: the entire Team Sky kit beautifully racked up, from TT bikes to wheels, along with the personal bedding of each rider which is transported from hotel to hotel to ensure every man gets a great night’s sleep.

A fascinating insight into the support behind a top pro rider.