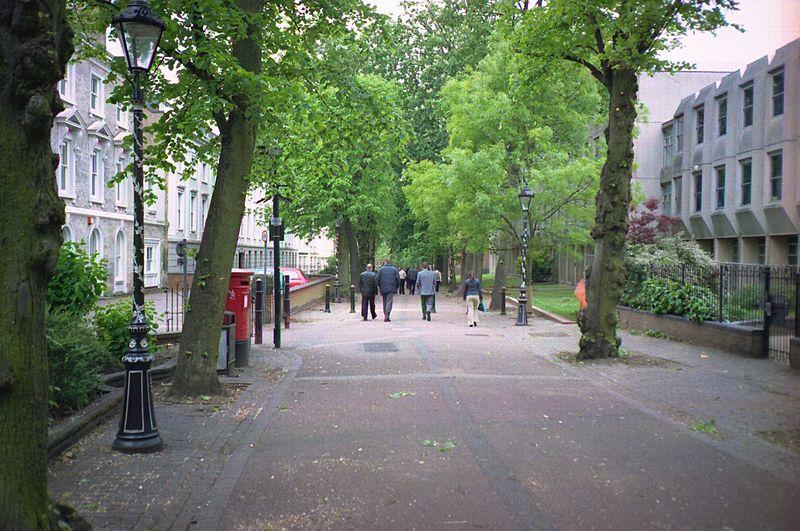 Leicester City Council has rejected calls from cyclists to allow them to use an 18th Century pedestrian-only street in the centre of the East Midlands city. Bicycles are banned from New Walk, as all traffic has been since it was laid out more than 200 years ago, but local cycle campaigners insist that it would provide a safer alternative to using major roads to access the city centre for those on two wheels.

The alternative to using the kilometre-long New Walk to ride to and from the city centre is to use the busy London Road, or a little further west, Welford Road, reports the Leicester Mercury.

According to Department for Transport road casualty data analysed by law firm Levenes Cycle Injury, there were 47 reported road traffic incidents that have resulted in cyclists suffering injuries on those two main roads and other neighbouring streets between 2005 and 2010.

Local cycle campaigners insist that those casualty figures justify reconsidering the ban on cyclists riding on New Walk, with Roger Lovell, co-founder of not-for-profit community cycling group Cyclemagic, telling the newspaper: "I get a bit fed-up of people making the case that New Walk has been traffic free since 1790.

"In 1790, there was no traffic other than horses and carts. The volume of traffic on busy roads like London Road and Welford Road is huge and it's no surprise there are a lot of injuries.

"New Walk offers the perfect solution for cyclists trying to get into the city centre from the south.

"All over the world there are areas shared successfully between pedestrians and cyclists. Even in Leicester city centre you can cycle in the pedestrian areas. I don't see why New Walk is any different."

"If both sides – pedestrians and cyclists – are sensible, things would be fine.

"Obviously, it wouldn't work with bikes tearing down there at 20mph weaving between pedestrians," he added.

A spokesman for Leicester City Council, which says on its website that its “aim is to get more people cycling, safely and more often,” said that there were no plans on its part to amend the status of New Walk.

"The council does recognise that cyclists need safer and traffic-free routes to and from the city centre, and this is part of a new stream of work to improve and provide more routes for cycling while ensuring safe and effective pedestrian routes, as well," he explained.

One pedestrian, Bella Watson, who spoke to the newspaper said that she believed there was justification for cyclists to use New Walk, but only if all cyclists using it were considerate towards those on foot.

Permitting cyclists to use New Walk “could work,” she stated, “but it would depend on how the cyclists chose to behave.

"Perhaps 90 per cent of them would ride responsibly but the others would cause chaos," she continued. "It happens most days anyway – people flout the rules and ride down here."

Christopher Chandhu, a student and cylist, said: "I hate riding down Welford Road and mixing it with the cars and buses. I try to be careful but a lot of drivers don't. It's much better to mix pedestrians and cyclists than cyclists and cars."

According to the Leicester Mercury, police regularly stage clampdowns on cyclists riding illegally through New Walk to remind them that it is an offence to do so.

Last month, the newspaper reported that 16 cyclists had been issued with £30 fixed penalty notices there in an operation that lasted three hours, with one handcuffed and arrested after initially refusing to provide police with his details.

Sergeant Andy Cox of Leicestershire Constabulary told the newspaper that police had launched the operation following a rise in complaints from people living nearby.

"We've had a lot of residents complaining about cyclists in New Walk and a couple of people who have been bumped,” he explained. “There have been disagreements between cyclists and pedestrians.

"We're just trying to raise awareness that this is one part of the city that you can't cycle through.

"Everyone we've stopped said they ride along here all the time and didn't know you're not supposed to."

The bylaw prohibiting cyclists from using New Walk, laid out in 1785 and a pedestrian-only throughfare ever since, has been challenged in the past, albeit unsuccessfully, and Sergeant Cox said it was not down to the police to decide whether or not the law should be altered.

"This is a conservation area and people living here don't want it to change," he commented. "You can't please everyone."

As reported here on road.cc earlier this year, Gloucestershire County Council’s Highways Department is currently planning a trial to allow cyclists to ride in pedestrianised areas of the city centre, with cycle campaigners pointing out that the alternative is for cyclists to risk injury by riding along the busy ring road.