Bespoked Bristol is over, you say? Not on road.cc it isn't. Certainly not when we haven't yet talked about some of the British bikes that really floated our boat at last week's show from the likes of Brian Rourke, Ted James, and Tom Donhou.

Rourke and Donhou not only had their own stands but also built bikes for Rapha Continental UK - so more on them (and that) later. First let's look at a couple of the bikes Ted James had on display at Bespoked. Like Ricky Feather, Ted James made his name as a BMX rider, and then latterly as one of the best known riders on the London fixed gear scene known by many as SuperTed - he was until fairly recently sponsored by Charge and appeared in a fair few of their riding videos. 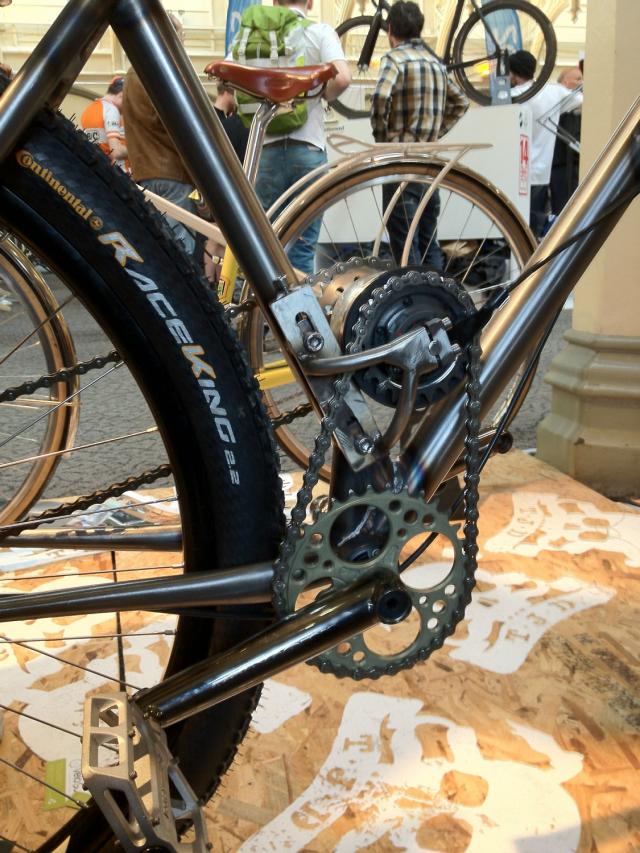 As well as making and repairing bikes, James has also started making his own hubs and headsets using his own machine tools – the story of how he found his Dean, Smith, & Grace lathe would make a great road movie, possibly a comedy, definitely an epic, in which one man triumphs against seemingly insurmountable odds to get the lathe of his dreams from Liverpool to his workshop in London. He did succeed though and there's a great set of pics on his website (www.tedjamesdesign.com) of the lathe and his other machines in action making the prototype hubs for the 29gnar a thing of raw beauty and power. So powerful, indeed, that we somehow failed to get a pic of the whole thing - mesmerised as we were by the Alfine hub gear mounted above the bottom bracket. 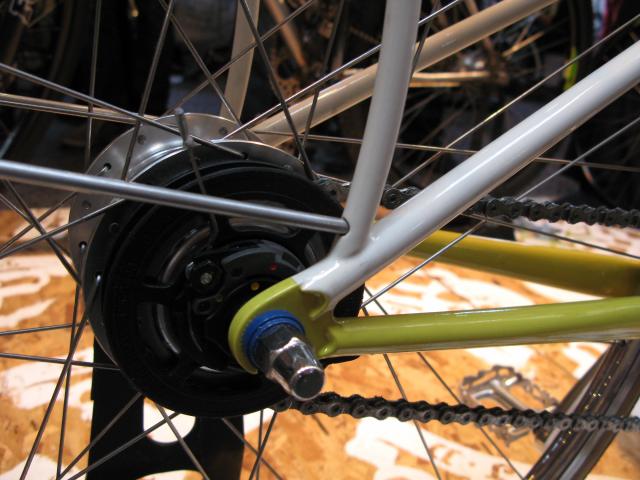 As the 29gnar shows, Ted isn't just about fixed gear bikes. The other bike on his stand that really caught our eye also made that point. The step-through mixte frame (that's it up top) was a genteel contrast to the 29gnar. This was one of our favourites of the many mixte-framed bikes at the show. We particlularly like the really neat mudguard mounts: the struts are held in place inside the frame by tiny grub screws. Neat. 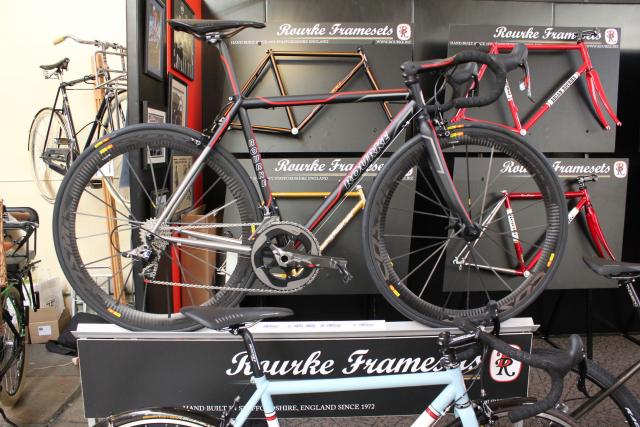 From a new player on the British frame building scene to one of it's acknowledged masters, Brian Rourke has been building top-end performance road and mountain bikes for years and his bikes have been ridden and raced by countless pros, champions, and even legends of the sport. Rourke builds in steel and usually fillet brazes or TIG welds his frames… or indeed uses a combination of the two.

All the bikes on his stand were worth drooling over, each one a bespoke build. However the big crowd pleaser on the Rourke stand was a mean-looking race frame in over-size 953. The dark modern paint job made it look almost like carbon at first glance but the bare seat stays told a different story. The frame was also sporting new SRAM Red components. 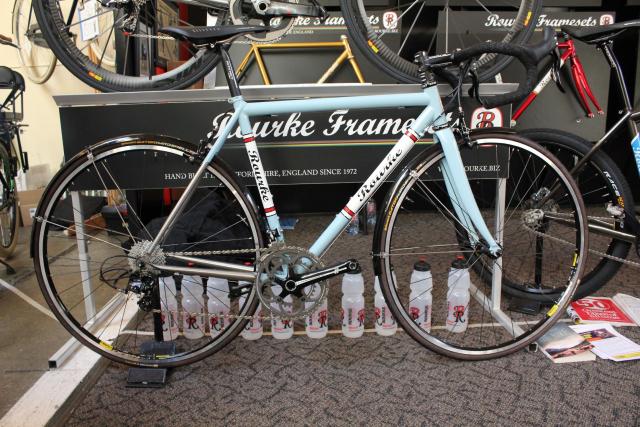 Mind you, our eye was also drawn to the fetching looking pale blue Audax bike next to it - also made from over-size 953 stainless tubing. Brian Rourke builds in a variety of mainly Reynolds tubesets including over-sized and super-oversized 853 and 631 - he also offers a Dedacciai HTS Zero build. All his frames feature his trademark wraparound seatstays – which Rourke reckons adds stiffness and strength to the back end - 5000 frames and no failures is a testament to that, says the man himself. They certainly look good too. Basically, the two stays are scalloped out to wrap around the seat tube and then joined at the top. So neat is the join that on one of the frames on display the wraparound bit of the 931 stainless stays was unpainted… oh, and that was their first 931 frame too. 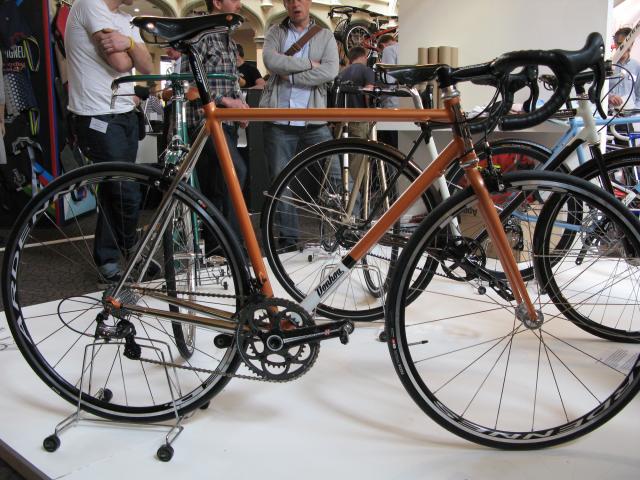 Last year Tom Donhou walked off with the Best in Show award. This year he didn't win any prizes but the collection of bikes he had to show were even more impressive than last year's batch. He easily had three of our favourite bikes of the show, two of them road bikes. Max was smitten by Roger's road bike, a stunning frame made from a combination of Reynolds 853 and their new 931 stainless tubeset - which made up the rear triangle (check the way the seat stays plug in to the seat tube) and that bilaminate lugged head tube? 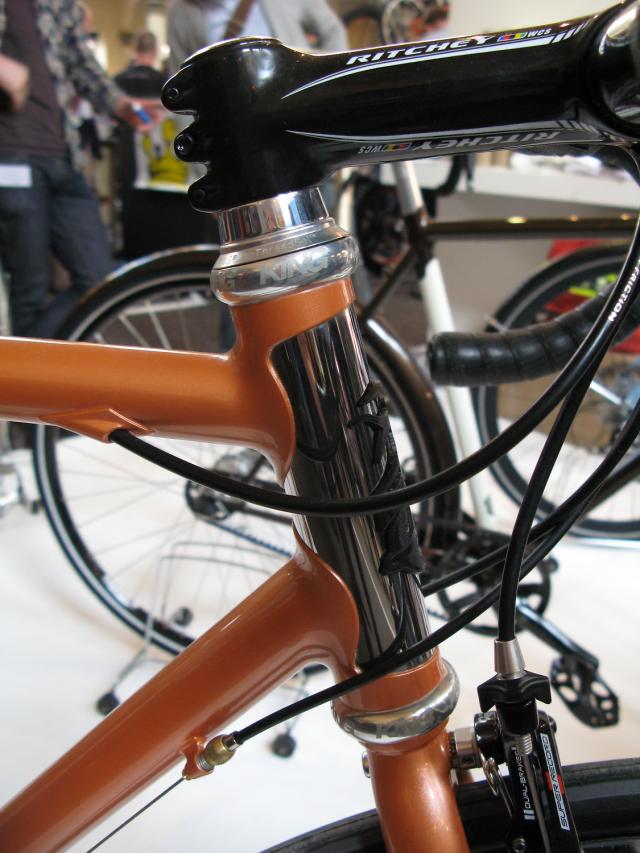 Bilaminate? It's a method of joining the tubes that combines both a lug and fillet brazing for both pleasing visual effect and to add strength too. On this bike the head tube lug acts as a sleeve for the 931 head tube within. It's certainly a striking effect and we'd guess the the combination of oversize 853 and 931 makes for a very strong and stiff front end. 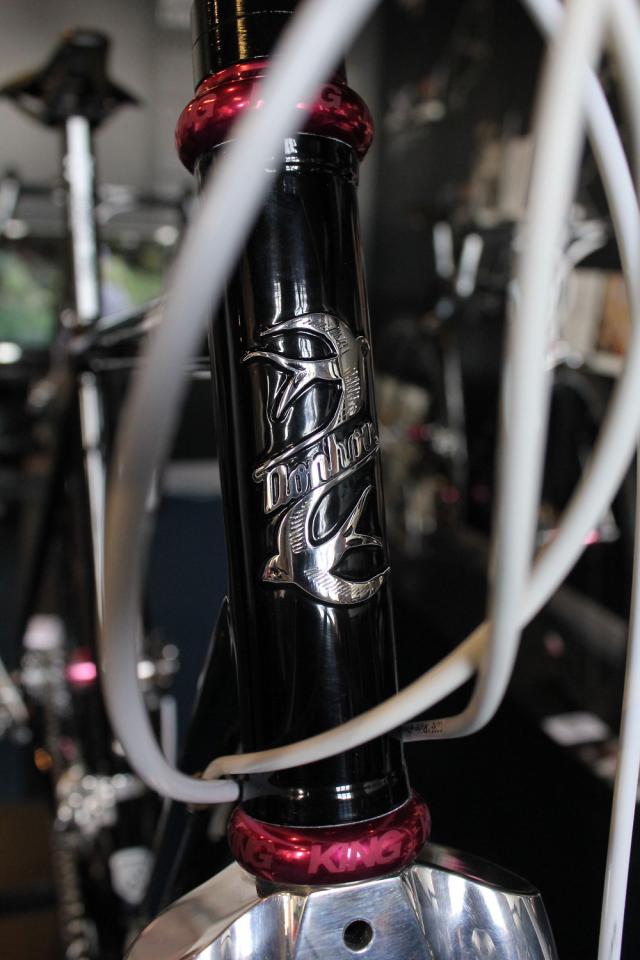 Rapha launched the UK edition of their Rapha Continental rides at Bespoked and showcased some of the British framebuilders who will be contributing bikes to the project includinding both Tom Donhou and Brian Rourke. Ricky Feather's Rapha Continental bike - which will be piloted by Max Leonard of this parish - won the prize for best road bike, while the other bike on show, which we've unaccountably got no pictures of, was by Robin Mather, the man who took both the best in show prize and the people's choice (Tom Donhou was second in that). Dave Yates and Condor are building the other two Continental bikes. 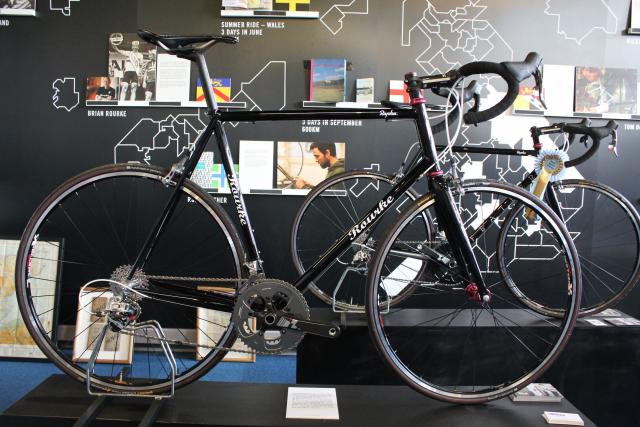 Rapha's Continental makes it to home shores after launching five years ago in the US. The basic idea is that it's all about big rides that aren't races. They may not be competitive but Continental rides are not about touring, the press release announcing the UK launch makes that clear right from the off. To be fair, as one of the chaps from Rapha explained, there wouldn't be much point calling the UK rides tours when the riders will have a support car and be staying in some nice hotels en route. In fact, the UK Continental rides are less about epicness - although there will certainly be some hard riding - and more about celebrating the diversity of landscape, artists, and craftsmanship the UK has to offer. 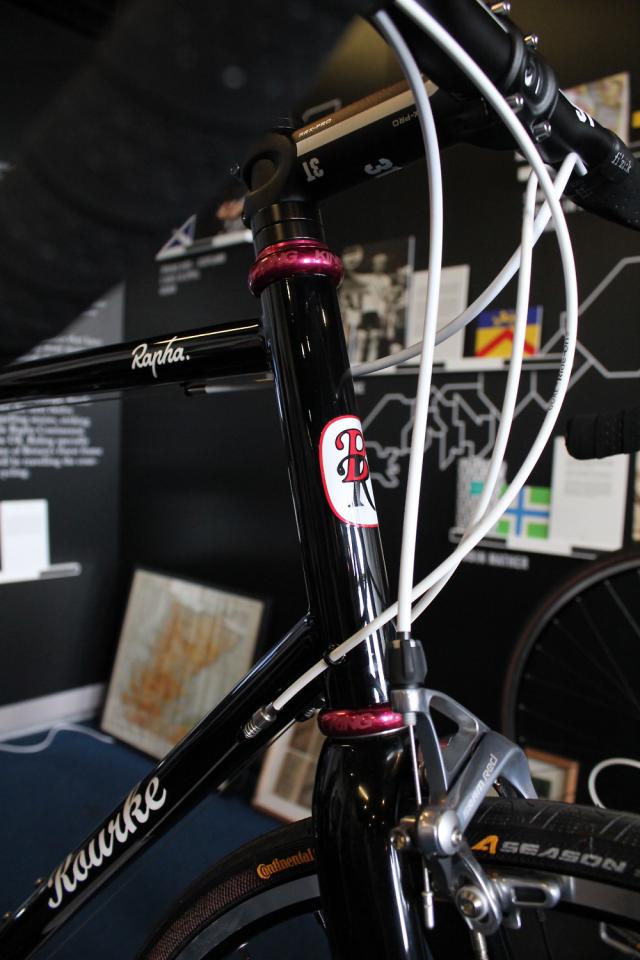 The Continental bikes certainly pay homage to that. Very different they are too. The Brian Rourke is made from TIG welded Reynolds 853 with all the welds silver soldered too. Whoever is riding it must be a big fella cos it's huge - we reckon a 62 at least. Oversized 853 might not be the fanciest tubeset ever but it should help stiffen up those big triangles. One of the big advantages of TIGing the welds too is that it doesn't use too much heat so won't affect the heat treatment of the tubes around the joint - of extra importance on a bike that's going to be ridden over rough terrain by a big rider. The Donhou Continental bike was one of my favourite bikes at the show - probably because it's a fancier version of the build on my own bike. It's a lugged Reynolds 853 steel frame so should give a stiffish and strong ride, which is what was wanted by its pilot Sam Humpheson, who's also the wheel builder for the project. The Donhou also comes with disc brakes and a very natty wound up carbon cyclocross fork with added fender mounts. 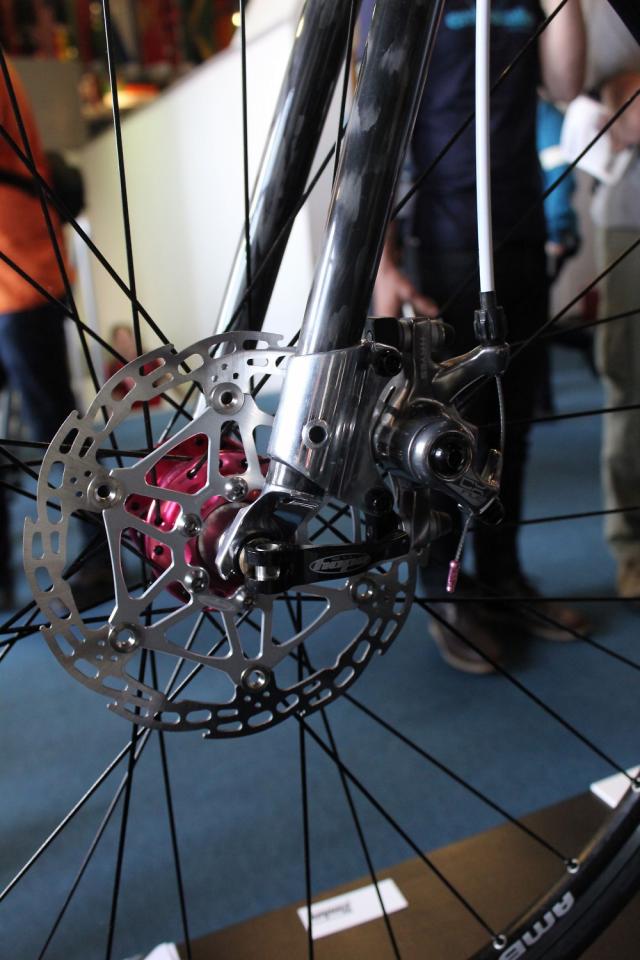 Those aren't any old discs either. The Donhou runs a set of new cable-operated Hayes Mechanical discs. Sourced by Humpheson, they certainly look good but Tom Donhou didn't have any idea what they stopped like. Donhou himself specs Avid BB7s on his disc-equipped bikes and they are easily the best mechanical discs for road bikes currently on the market . They confer a performance advantage over traditional rim brakes which isn't something you can say about all mechanical discs. Mind you, that Hayes rotor certainly is pretty.

The first Rapha Continental Ride is scheduled for the end of this month across Scotland. While we'll be putting the last of our Bespoked galleries up this week with some cool urban, utility and touring bikes.