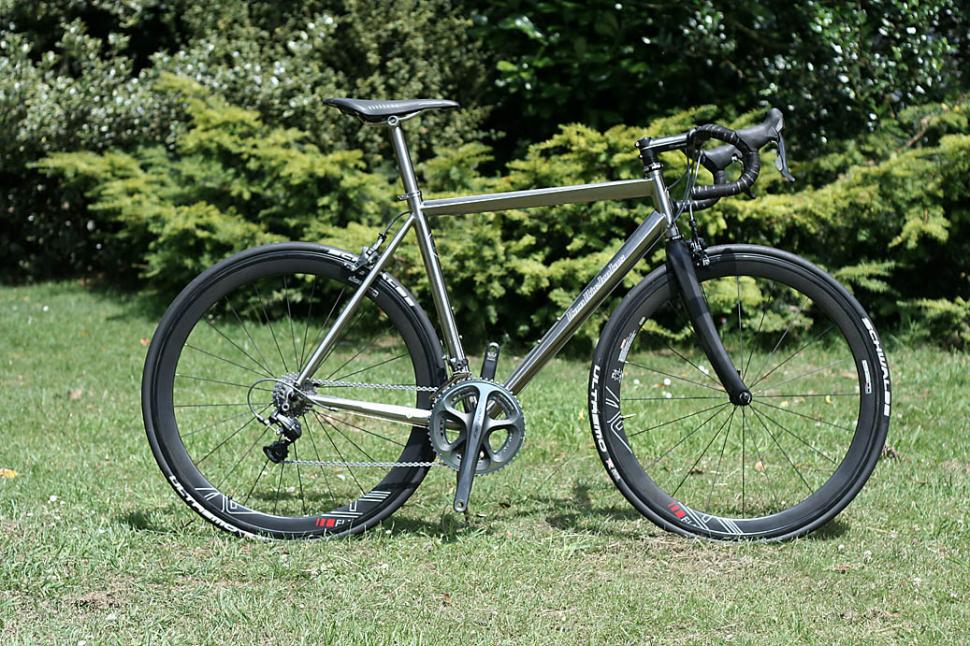 About as shiny as they come
by dave atkinson

Just about the shiniest thing we could hope to have in the office, Van Nicholas have just dropped off an Astraeus for us to test, built up with full Dura Ace 7900 and VNT Carbon clincher wheels. Cue silence and a lot of dreamy gazing from pretty much everyone: it's a fantastic looking thing. We first saw the bike at Eurobike last year and have been hankering after one ever since. Now it's arrived in the office it's even more beautiful than we remembered.

The Astraeus is Van Nick's top-of-the-line road machine and the first production bike to use hydroformed Titanium tubing: it uses seamless 3Al/2.5V Titanium throughout in a compact configuration, with the top and down tubes pretty heavily shaped to adjust the properties of the ride.

The top tube starts off at the head tube as a triangular section, with the two seams moving down over the length of the bike to form more of a diamond shape at the seat tube. The down tube is basically diamond shaped throughout its length, flattened at the bottom bracket to better cope with the twisting forces. The chainstays are ovalized, the seat stays round; both are tapered to tweak the ride.

The frame is impeccably made and the brushed, hand polished finish gives it a lovely lustre in the sunshine; there's a minimum of decals and a Ti head badge to round off the look. Ours came with full Dura Ace 7900 and Van Nicholas' own VNT deep section Carbon clinchers and Carbon fork. The delivery note suggested that this build would set you back an eye-watering €6,083, but speccing it up on the website it's hard to get much above €5,000: we'll confirm the price when we run the test. Either way it ain't cheap, but the frame alone weighs in at €1,999 which is pretty reasonable for top-end Titanium.

As specced our bike weighs 7.6kg (16.8lb) which is light, but not astonishingly so. Fiddling around with the spec on the Van Nicholas site's handy bike builder can bring the all-in weight down to around 16lb, mainly by swapping out the bars and stem for Ritchey ECS units, and slapping on an EC90 fork. All-out light weight isn't what Titanium's about though: it's about the ride, and we'll be sharing our thoughts on that once we've put the Astraeus through its paces.