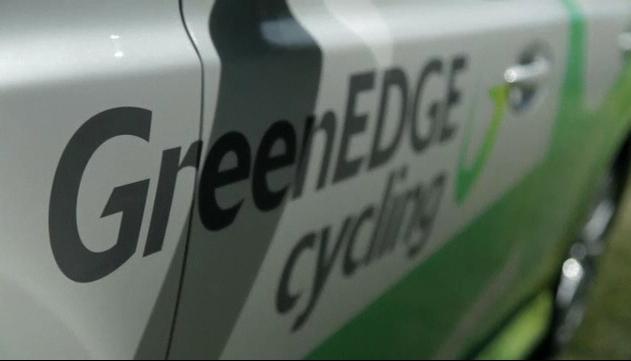 Simon Gerrans of GreenEdge has succeeded Matt Goss, his team mate at Australia's GreenEdge, as winner of Milan-San Remo. The Australian champion, Fabian Cancellara of RadioShack-Nissan, and Vincenzo Nibali of Liquigas-Cannondale went over the top of the Poggio together to hold off a chasing pack including three-time winner Oscar Freire and Tom Boonen. Mark Cavendish, dropped on the earlier climb of Le Manie, tried desperately to rejoin the leaders, but it proved an impossible task.

The lead trio had an advantage of just six seconds as they headed under the flamme rouge to enter the final kilometre, Cancellara powering away at the front as he had done on the descent of the Poggio, the day's final climb, crested a little over 6 kilometres from the finish. Gerrans, who had followed Nibali's expected attack on the climb, kept with the other two riders on the descent and on the way into San Remo.

With such a slender lead going into last of the 298 kilometres of cycling's longest one-day race, it looked inevitable that they would be caught, but Cancellara, runner-up to Goss last year when he also narrowly missed out on a successful defence of his Paris-Roubaix and Tour of Flanders titles, was driving on. Gerrans left it late, but timed his move out of the Swiss rider's slipstream perfectly to make his winning charge for the line.

Cavendish's race had effectively come to an end long before on Le Manie, the climb whose summit lies a little over 90 kilometres from San Remo, introduced in 2008 to toughen the course up. The location where the hopes of so many riders came to grief 12 months ago after most of the field was held up behind crashes, today it was Cavendish alone whose chances of victory ended there - and with it, his dream of winning Milan-San Remo in the rainbow jersey, as he had pledged to do following his victory in 2009.

Losing four minutes to the group containing his rivals, Cavendish found himself alone on the road but for the ever-present Bernie Eisel, who buried himself deep to get his team mate back into the second group on the road. With Team Sky picking up the pace, it closed to within 40 seconds of the leaders. The gap started widening again, however, and a pat from Cavendish on the back of Salvatore Puccio, the Italian first-year pro who was a late call up for the race, signalled that the chase was over.

Liquigas, who had two of the big favourites in the shape of Nibali and Peter Sagan, attacked on the first of those climbs, other riders, including Vacansoleil-DCM's Johnny Hoogerland also chancing their arm. Near the summit, a crash involving seven riders cost BMC Racing's Philippe Gilbert the chance of improving on his third place last year.

Earlier on, a crash involving Colombia Coldeportes rider Carlos Quintero, whose head reportedly struck a well, brought back memories of the death during last year's Giro d'Italia of Wouter Weylandt. Quintero, thankfully, was seen to be moving his arms and legs, though indications are he suffered a suspected fractured skull and elbow.

As happened 12 months ago when the peloton paused before the start of the race to remember the victims of the Japanese tsunami, the peloton again observed a minute's silence before commencing the usual procession through the centre of Milan ahead of racing beginning in earnest on the outskirts of the city - this time for the Belgian children and other victims of this week's coach crash in Switzerland.

Immediately from the start of a race ridden mainly under cloudy skies, Ji Cheng of Project 1t4i, the first Chinese cyclist to take part in the race, and the Team Type 1-Sanofi rider Vegard Stake Laengen attacked, and the pair were soon joined by another seven men. While they managed to stretch their lead out to 14 minutes, helped by a strong breeze that prevailed throught the race, which Gerrans won in a time of a little over half a minute inside seven hours, at an average speed approaching 43kph. The escapees, meanwhile, had been swallowed up with more than 70 kilometres still to ride.