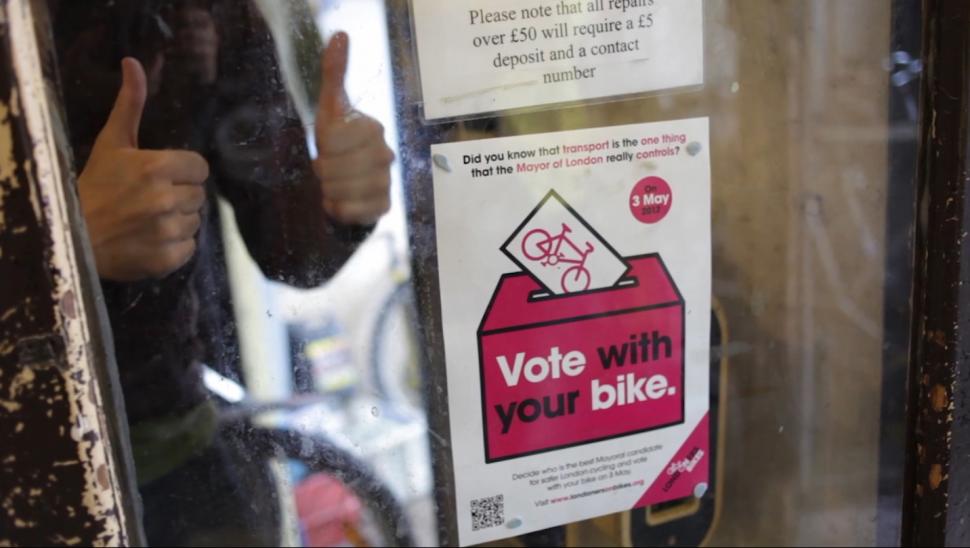 Group's Tour des Bikeshops at weekend was its first city-wide initiative...
by Simon_MacMichael

With London’s mayoral election on 3 May now less than two months away, cycle campaigners in the capital united under the banner Londoners on Bikes have been stepping up their efforts to try and ensure that whoever wins will put the interests of cyclists, including their safety, at the heart of their transport policy.

This weekend the group, comprising cyclists who have come together to ensure that the voice of bike riders is heard ahead of the election, held a ‘Tour des Bikeshops’ which saw flyers and posters distributed to bike shops and cafés throughout London.

As part of its campaign, Londoners on Bikes underlines that unlike areas such as policing in which the Mayor of London has some influence, transport policy is the one issue on which he or she has full control, chairing Transport for London, drawing up its transport strategy and appointing its board.

“The Mayor has the power to decide everything from tube fares to where to put pedestrian crossings. And, crucially, how to make cycling safer and more convenient,” says Londoners on Bikes.

The group says that 2,150 people have now signed up to it, which based on the 45 per cent turnout at the 2008 mayoral election would equate to just under 0.1 per cent of the votes cast.

That may not sound a lot, but as Londoners on Bikes points out, with present incumbent, the Conservative Party’s Boris Johnson, and his predecessor, Ken Livingstone, currently neck and neck to lead the polls – other candidates include the Green Party’s Jenny Jones and Liberal Democrat Brian Paddick – each vote is crucial.

“There is a real possibility of the candidates ultimately having to fight for votes from a unified cycling community,” the group explains.

This week will see Londoners on Bikes begin to distribute flyers on key commuter routes, and it says that the death last week of eight-year-old Ali Nasralla from Kingston, who died in hospital after he was hit by black cab while riding home from school, “provided a tragic reminder of just what we're campaigning for.”

Ali was the third cyclist to die on London’s roads this year, which Londoners on Bikes described as “a sobering challenge to Mayor Boris Johnson's claims that ours is a 'world-class cycling city'.”

It added that “a city in which children can cycle to school should be a priority for the London mayor,” adding that it is “campaigning not just for the rights of cyclists, but for more liveable urban spaces that everyone can enjoy safely.”