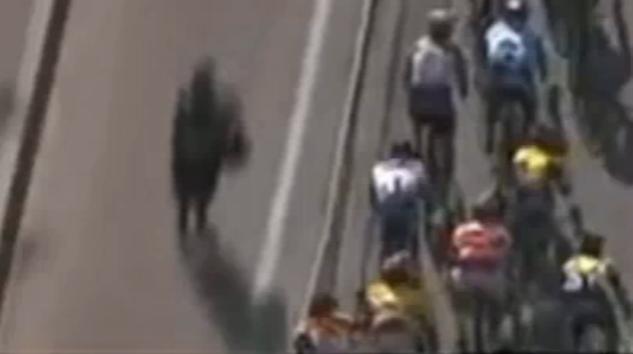 The UCI yesterday suspended Theo Bos for the incident  during the Tour of Turkey in April when he appeared to push Daryl Impey into a crash barrier as the field prepared for the finishing sprint on the final stage. Impey, riding for Barloworld was the race leader and he went on to win the race because the incident happened in the last 600m of the stage, and despite being seriously injured he got back on his bike and crossed the line, he has not raced since.

Bos has been banned for one month, the minimum sanction for the offence under the UCI rules – he could have been banned for up to six months under the rule governing bringing cycling, and the UCI, into disrepute. Tellingly although video footage of the incident suggests that the UCI could have charged Bos with far more serious offences carrying far greater potential penalties, they chose not to do so.

Giving Boss the minimum suspension perhaps reflects the fact that the UCI clearly feels that some infraction of the rules occurred but that TV footage of the incident (see below) made it look worse then it was, certainly there are plenty of people willing to believe Bos including a number of his fellow riders such as Robbie McEwan.

The main planks in the Bos defence argument are: that it would be nigh on impossible to throw a rider off his bike in this fashion – even for someone as strong as a track sprinter like Bos; that it would make no sense to throw a rider down in front of you anyway because that would inevitably bring you down too; and that the most likely scenario is that as space tightened a pedal went in to Impey's back wheel and he started to go down, Bos then took his hand off the bars and grabbed Impey's jersey. Everybody agrees that taking his hands of the bars was at best a  stupid thing to do and that seems to be what the UCI are punishing Bos for. Either way the arguments  for and against is likely to continue.

After meeting yesterday in Aigle, the Disciplinary Commission of the International Cycling Union imposed a one-month suspension on Mr Theo Bos (NED) after finding that he had breached art. 12.1.005 of the UCI Regulations.

Having examined the report by the President of the Commissaires’ Panel and studied the available TV images following the crash involving riders Theo Bos (NED) and Daryl Impey (RSA) during the final stage of the Presidential Cycling Tour (Tour of Turkey), the UCI decided to refer the matter to its Disciplinary Commission, on the grounds that Theo Bos’ behaviour undermined the image, reputation and interests of cycling and of the UCI. According to article 12.1.005 of the UCI Regulations, such an infraction is subject to a suspension of between one and six months.