“Go to Taipei,” they said. “Find some interesting new stuff and write about it.”

The only trouble is, Taipei Bike Show is massive; where the hell do you start? Being part magpie, I’m drawn to the shiniest bikes, so here’s my pick of the eye-catchers from day one. Hold on to yer hats… We’ve got carbon; we’ve got steel; we’ve got plywood.

This gleaming specimen (main image) is the Colnago C59 Ottanta, released to celebrate the 80th birthday of company founder Ernesto Colnago. If you’re not a linguist – or even if you are – ottanta is the Italian word for 80. The bike has been produced in a strictly limited run of… guess how many. 46. Nah, not really – there are 80 of them. 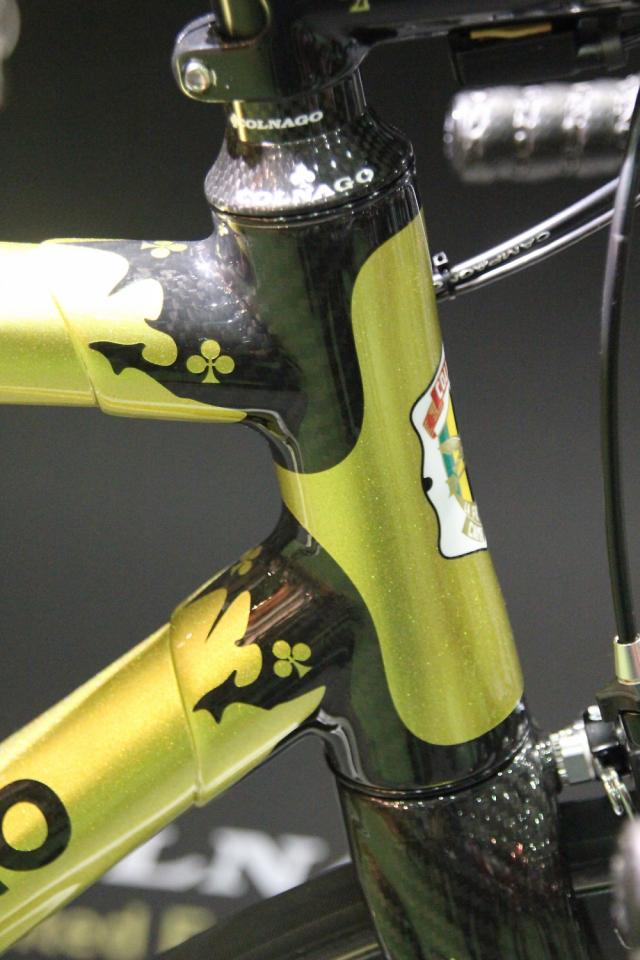 The frame and fork are, of course, the existing C59 design but in a gold and black design that Colnago call 1970s ‘Arabesque’ decoration. The groupset is Shimano 2300. Nah, only joking again; just can’t stop myself this evening. It’s Campagnolo Super Record EPS. It has to be, hasn’t it? 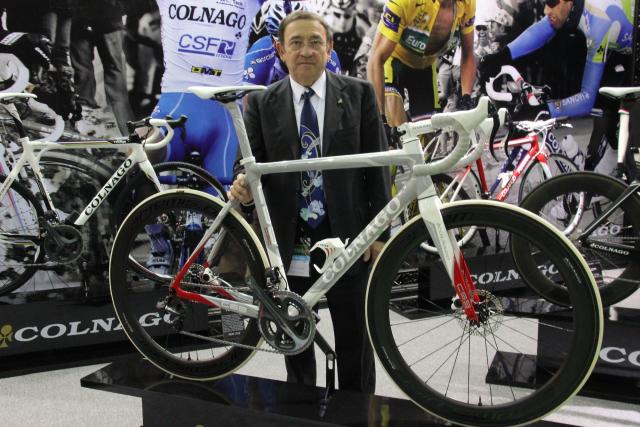 And here’s the man himself, looking good on it. Happy 80th birthday to Ernesto.

Ah yes, I spotted this earlier on. To be honest, I could hardly miss it. This is the Duke from Solu who, as far as we know, don’t have UK distribution (feel free to correct us if we’re wrong). The Duke - like the sportive version of the Dursley Pedersen that they never made because there were no sportives. The Duke is tubular steel with an unbelievably shiny finish – they call it high-tech water plating process technology. What does that mean? Funny you should ask; I did too. They wouldn’t tell me. 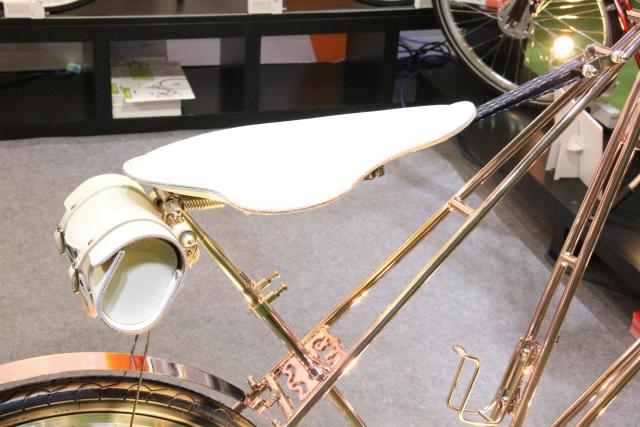 That saddle is leather and it’s suspended between the… well, top tube, I guess you’d call that, and the seat tube. The gearing is via a Shimano internal hub and that’s a belt-drive system. Good option; an oily chain is going to wreak havoc on the shininess. You could opt for the Duke in red… but why the hell would you want to do that? 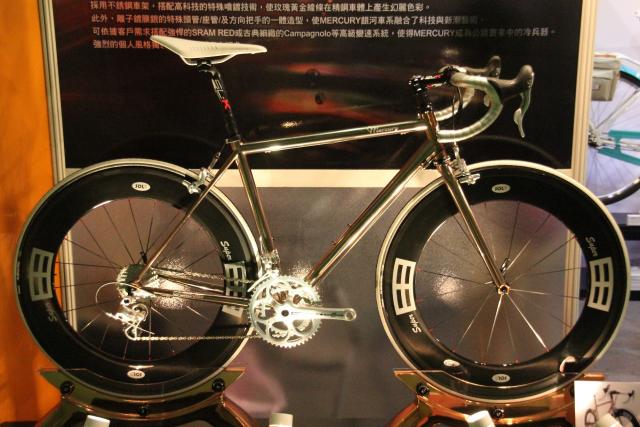 Solu’s Mercury road bike is more traditional looking but it still stands out from the crowd. Made from Reynolds 931, it also gets the high-tech water plating wotsit finish and it’s certainly a thing of beauty. It comes in Campag and SRAM builds.

For more info go to www.solubikes.com.

Hey, check this out! It’s a bike that’s made of wood, so what have they called it? Woody. The design is more imaginative... 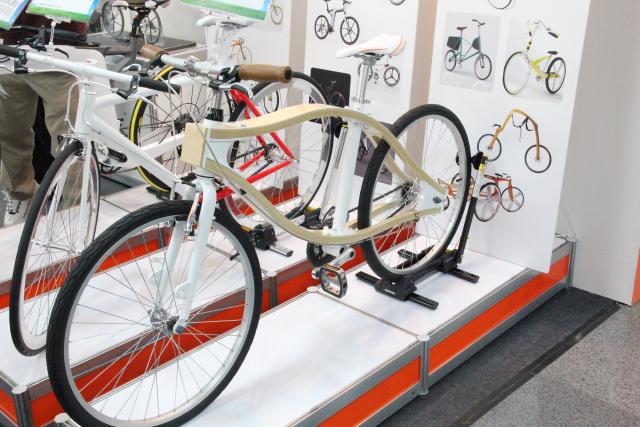 Now, there is a US wooden bicycle brand called Woody, but I don’t think this is from them. Again, I could be wrong, but there was no one around to ask when I rocked up. This was an entry in a design competition and my impression is that it’s not in production. 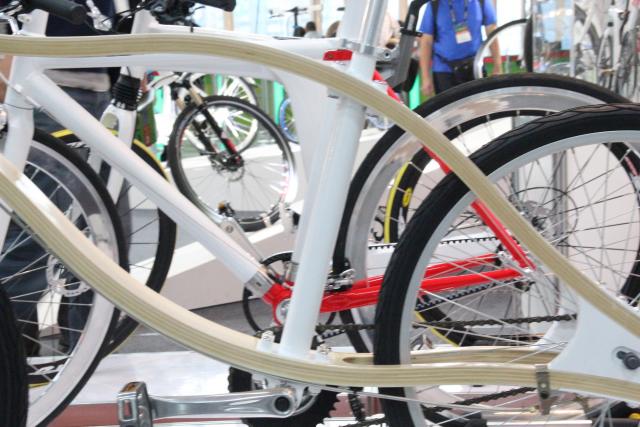 What I can tell you is that Woody is made from plywood that’s been bent in a high-temperature press. And those two main pieces come out of the same press, so they virtually mirror one another. The top tube and the down tube are the same shape; the seatstays and the chainstays are the same shape. Clever, huh? 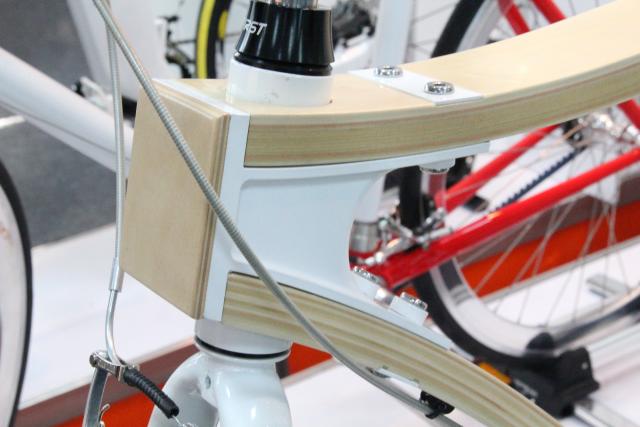 As well as looking neat, that simplifies the manufacturing process – so it’s more ecological. Plus, wood is a renewable resource. You can grow it and everything. Admittedly, there is carbon fibre in there to enhance the shock proofing.

Right, you can have one more interesting bike before it’s time for me to hit the hay (it’s late over here; I’m living in the future, eight hours ahead of you slackers)… 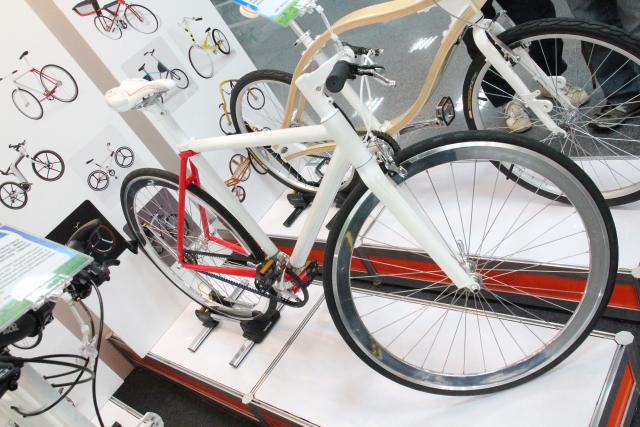 This V Bike is another entry in that design compo and the idea is that it’s easily separable for compact storage – so you get couplings around the bottom bracket and a bolt just below the seat clamp. It uses very few components, the idea being to keep things as convenient as possible and to maximize durability. Will it ever reach full production? I couldn’t tell you, I’m afraid. Oh, one bonus bike to finish off. It’s not new but I don’t think we’ve ever featured it before on road.cc (do pay attention Matthew - ed) : the Ceepo Viper. It’s what Batman uses when he does a triathlon. Speaking of superheroes… this man ain’t one. He’s just a bloke who has run out of paint halfway through doing his wellies. His sister is so embarrassed.

I’ll be back with loads more interesting stuff tomorrow.