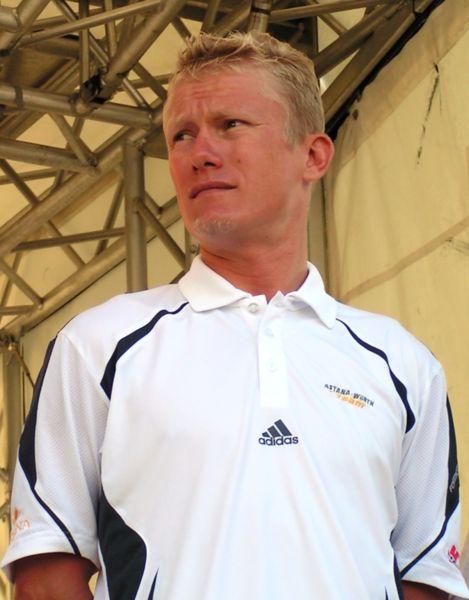 Vinokourov says he WILL ride for Astana when his ban ends…

And anyone who doesn't like it can leave, that means you Johan...
by Tony Farrelly

Speaking at a press conference in Monaco yesterday banned Kazakh rider Alexander Vinokourov was adamant that he would be returning to the Astana team, come what may, when his current ban from cycling ends on 24 July. If the any of the current management set-up don't like that fact, they can leave – and that includes team boss Johan Bruyneeel.

"I will return to professional cycling on July 24," Vinokourov told the press conference.
"Astana was created in 2006, it is our baby, I would not want to join another team.

"I am negotiating with Johan Bruyneel, but the Kazakhstan cycling federation wants me to ride in this team.

"This team was created for me and it is down to me and I don't see why I should not return.

"If he doesn't want me then he should leave the team."

Bruyneel's silence on the subject of Vinokourov's return to Astana has been telling, although he was a rival respected by Lance Armstrong and Alberto Contador seemed comfortable with the possibility of his return talking to the Associated Press last year:

“…the truth is that the relationship I had with him whenever we happened to meet was always good.

"It would be like just another normal rider coming to the team."

Indeed Contador went on to say that he would find it easier to work with Vinokourov than this season's big comeback story, Lance Armstrong:

"The only thing is that at the Tour de France, where we have the same objective, it's better that the whole team knows who the leader is," Contador said back in September. A situation that's been sorted to his satisfaction.

Given the funding problems that have beset Astana in recent months there has to be some doubt as to wether the Kazakhstan Cycling Federation can afford a team containing Vinokourov and Contador plus the likes of Klöden and Popovych. Luckily for the Kazakhs Armstrong currently rides for nothing. The team has found a new Kazakh backer: Samruk-Kazyna – a body which administers Kazakhstan' national assets – has stumped up $9 million dollars to fund the team for 2009.

The possibility has to be that Bruyneel and his management compnay plus the majority of the current riders will move on for 2010. If Bruyneel is resistant to Vinokourov's return and the Kazakhstan Cycling Federation back their country's most famous rider the crunch will come quickly after the Tour because Vino insists that he wants to ride the Tour of Poland and then the Vuelta.

Vino meanwhile dreams of competing in the Tour de France again and clearing his reputation with HIS team.

"I will race for one or two years maximum, for my children and to rehabilitate my image on the world stage.

"Over the last two years I have followed cycling on television, it is my passion.

"I only stopped riding for a few months in 2007, I have cycled with friends a lot in the last two years.

"It was always my dream to compete in another Tour de France."