It wasn't all £8,000 bikes at CORE. There was a best-ever naming system for a range of tyres for a start.
by nick_rearden

There were new road tyres under the venerable Clément name, Fizik custom-mouldable insoles to fit every brand of cycling shoes, a host of new accessories from one of our favourite techie gadget brands Topeak and even a range of bike mirrors from newcomers Cycle Aware, all catching our eye at the CORE bike show earlier in the week.

Clément is an early French cycling industry name that post-WW1 went on to be used all through cycle sport's golden age in the 1930-50s and up until the '80s by the Italian tyre makers at Pirelli for their tubular bike racing niche. The Clément brand was - is - legendary for 'tubs' and still spoken of in reverential tones by racers of a certain age although no tyres were made for over ten years.

Of late, the brand name has been resurrected, initially with some rather nice and innovative 'tubeless' tubular and clincher cyclocross tyres named after the airport codes of famous 'cross racing areas - PDX is Portland, who knew? - and all made now in the Czech Republic. As of now, there's also an interesting first range of 'fast' road-going clincher tyres, too.

Interesting because the sizes start at 23mm, stop off at 25mm and there's also a 28mm option in the large-volume style that folk are beginning to realise can be faster than the skinniest on a tarmac bike. These are called Strada LGG - LGG is the airport code for Liege - and all come with lightweight, folding beads. There's also a couple of Urban/Adventure tyres, also folding, in 35 and 40mm width that buyers of all those trendy 'cross bikes will look at with interest if they're mainly riding on roads and towpaths.

All these tyres come in standard and 'Dual Compound' construction, the latter better able to battle cuts and punctures, according to Chocolate Distribution, the UK importer. Prices range from £27 for a 23mm tyre to £50 for the X'plorer MSO 700x40 Urban/Adventure tyre - MSO = Missoula, Montana, getting the hang of this now? - but the one we're eyeing with interest is the Strada LGG 25mm Dual Compound for £32. We're rather hoping they'll send us some to try. 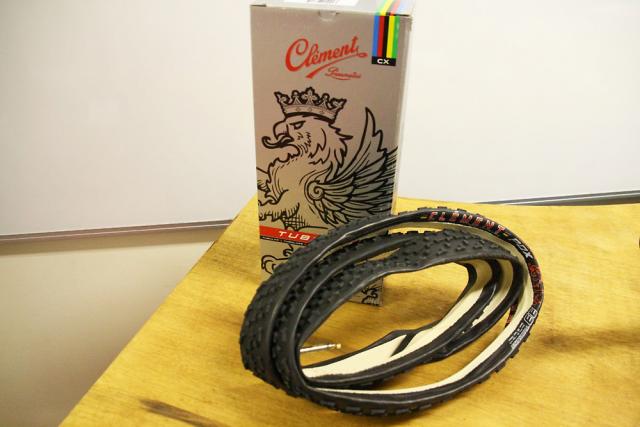 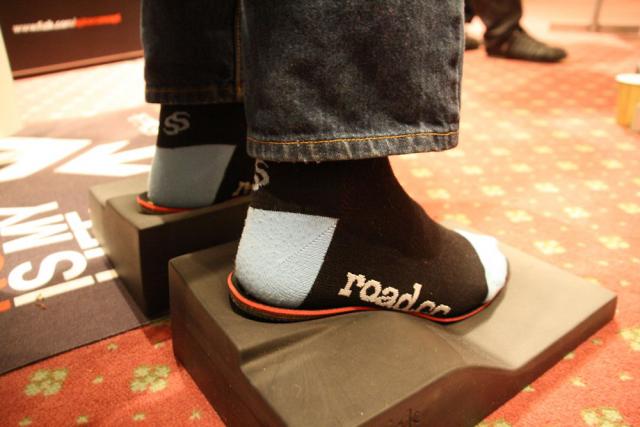 Don't do this in your road.cc socks: Fizik's template holds 3D Flex insole while it sets to your foot shape.

Italian brand Fizik have made heat-mouldable fitting for their range-topping R1 shoes a feature from the start. Now they're offering a kit in collaboration with insole specialists Sidas that dealers can help you fit to Fizik's other models as well as any other cycling shoe brand. A new 'Flash Fit Technology' unit that is fundamentally a small, fast toaster oven that looks just like a desk-top scanner heats the insoles in your size for long enough to mould to your foot using a shoe-shaped template. You just bear down, applying pressure for a few minutes until they're set. Fizik's nice young man Hamish was pretty horrified we wanted to keep our road.cc socks in shot instead of the usual bare feet but the result was as expected; our right instep is shot to pieces. Fizik dealers are getting these in as you're reading this. The price is £59.99. 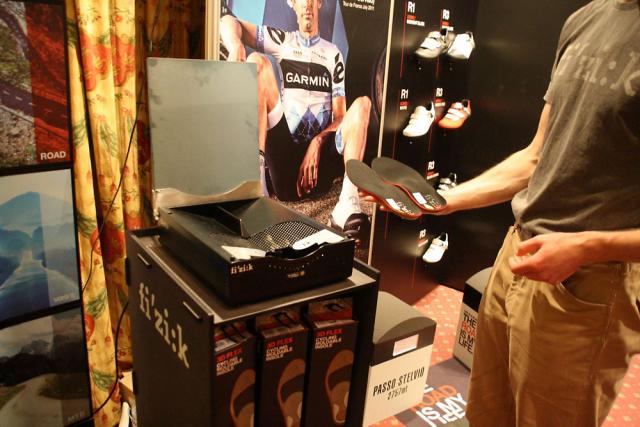 Hamish 'Flashes' the insoles to soften their Podiaflex layer prior to applying foot pressure. 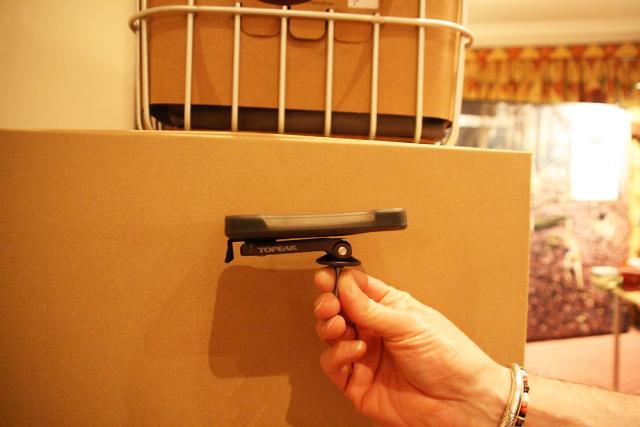 Topeak seem to have a solution for every cycling eventuality and we've now seen two of their fixes in one in the form of their new Ridecase for iPhone 4. Only the other day we were expressing surprise that more accessory-makers haven't utilised the top caps of modern Ahead-style handlebar stems for mounting all manner of as-yet-unthought-of additions. We've also bemoaned the lack of an iPhone case that stays in place but doesn't take so much room on the handlebars. Et voila! Here's Topeak with quite the nicest centrally-mounted iPhone case yet for £32.99, or at least based on first impressions. Nicely machined from aluminium and adjustable for viewing-angle, the Ridecase also has a clear rubbery waterproof condom that stretches across the unit if you're suspicious of the weather. 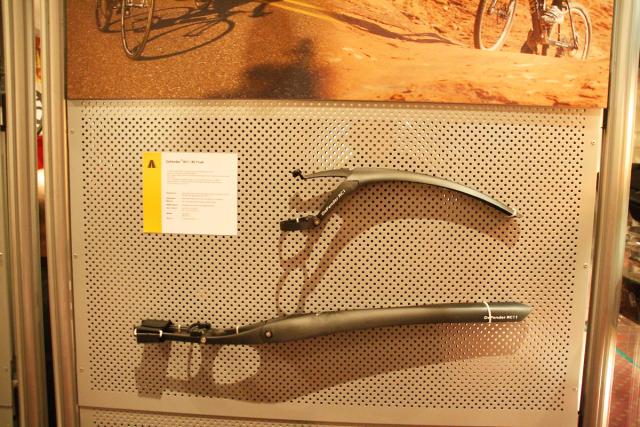 'HybridRocket Technology' features in three new pumps from Topeak that combine the speed of air cartridges with the dependability of a well-made hand-pump. For roadies, the Hybrid Rocket RX at £39.99 at only 168mm long and 100 grams in weight - not including the air canister, to be fair - is likely to the most attractive in nicely machined aluminium. Topeak pumps have been well reviewed on road.cc so we're looking forward to trying this one. 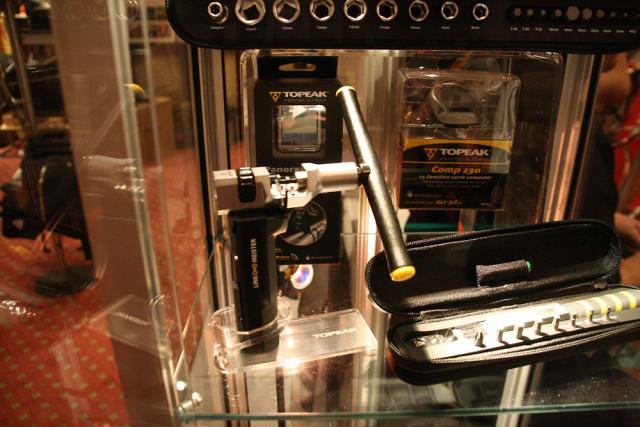 We're not sure if the Topeak Link Meister chain tool at £99.99 is the most expensive in the world but it certainly is for one primarily designed for the home workshop. For anyone happy fitting the wide range of modern pin and link type chains up to 11-speed widths, they could easily end up successfully fitting chains for all their friends and family and justify the price. They're calling it a 20th Anniversary Limited Edition but the main claims to fame apart from working with all chain types is that there's an integral chain-wear gauge and space in the handle for spare plungers and pins.

Freeload carrier racks for bikes with no fittings 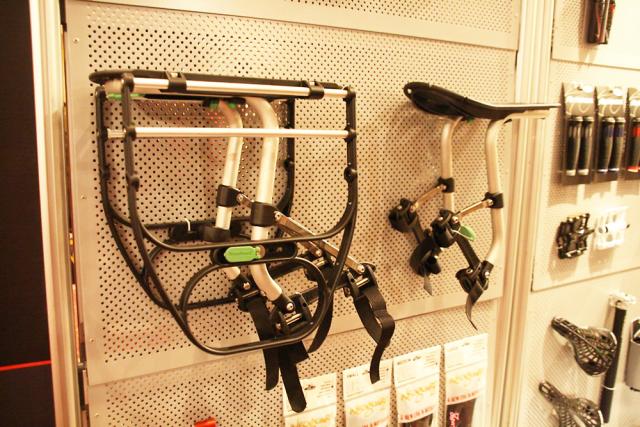 It's not every bike that comes with the little fittings to attach a luggage rack. I mean, they ought to, but that's another story and no help whatsoever if you have the bike already and need to get your stuff to work or away on a one-off trip. Freeload make a clever adjustable system that fits either front or rear by means of four Velcro attachment points; to your forks or seat stays, basically. A range or decks and side frames suited to carrying luggage from panniers to beach balls then attach making it a versatile and adaptable system. At £114.99 pricey for a one-off, maybe. But we could see it doing the rounds of various bikes over the years as the build quality looks sound.

A nicely thought out and seeminlgy well made range of cycling rear-view mirrors is now coming to Britain through Extra UK and their stockists. We never thought we'd be pleased to see cycling mirrors but these look like at least one or other might be useful for anyone but the most racy of racing cyclists. 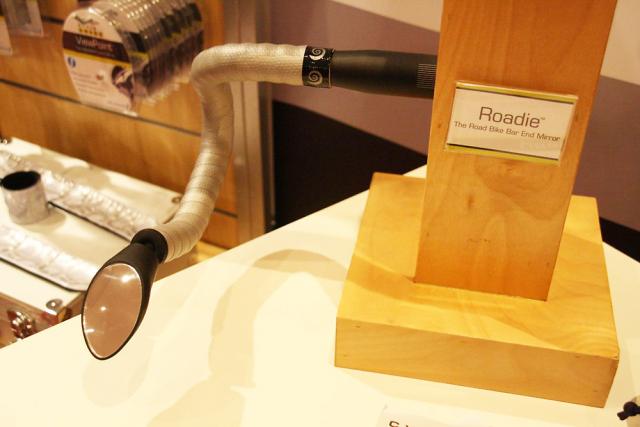 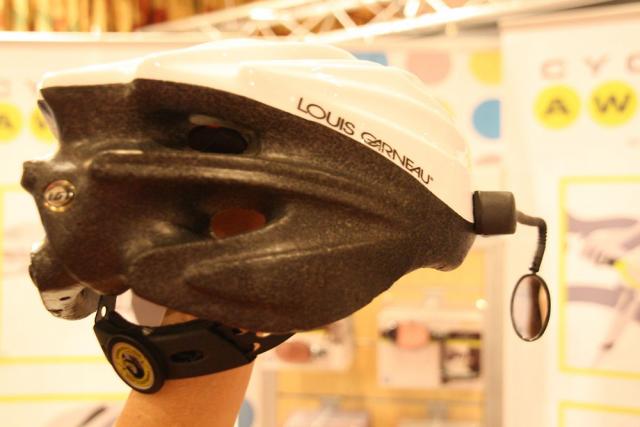 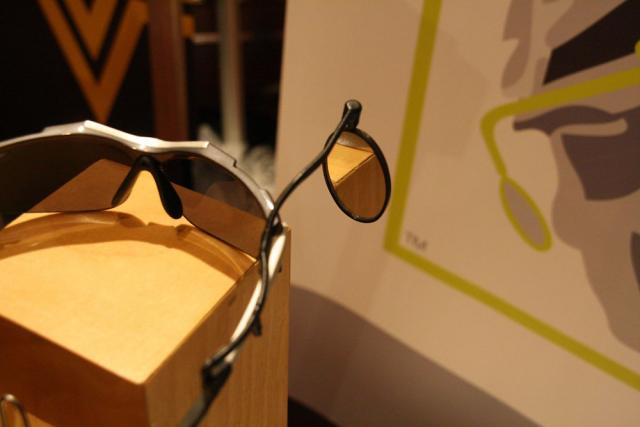 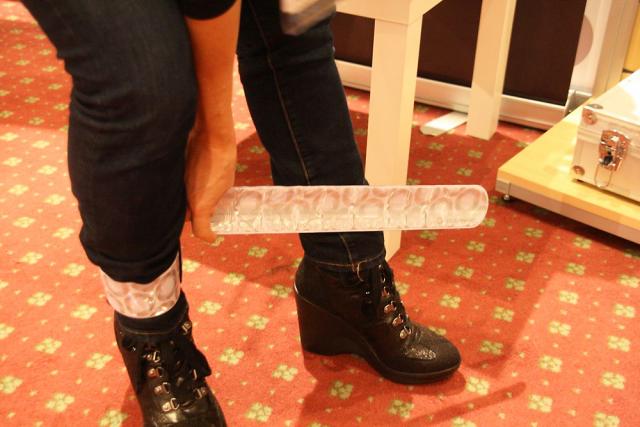 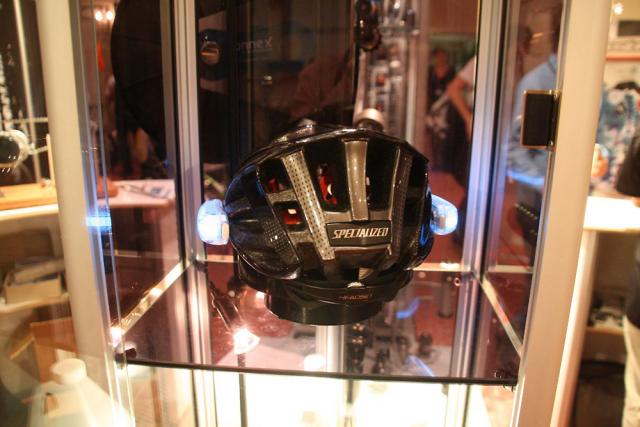 We've recently seen jackets, helmets and backpacks featuring battery-powered Electroluminescent panels for added visibility but this Neonight set is the first that can be retro-fitted to the sides of a helmet. A pair of USB-charged pods will run for five hours while casting their ethereal blue glow both sideways and, because they stick out a bit, to the front and rear as well. Neonight tell us our night vision is more sensitive to the blue-green light spectrum and is also more visible in misty conditions. Price £59.99