Silverstone racing circuit's new expo building The Wing was the venue these last two days for The Bike Place, a gathering of bike companies showing off their newest wares to bike shop buyers and the likes of us. There was lots and lots of shiny and alluring mountain bike kit but plenty of road-related stuff to keep us happy starting with Sabbath Cycles.

The Midlanders at Sabbath have been selling titanium road frames exclusively now for five years, their trademark being the way they curve their tubes to help the welded joints meet at better angles, they claim, so they can be stronger and lighter. In areas like the rear stays, that's not as remarkable these days as it was when they started; everyone is at it. But Sabbath even curve tubes that don't normally get curved, the down tube on their top-end Nirvana model doesn't just curve once, it does it twice for double the controversy.

Anyway, this year they're courting approval from even the most steadfast of traditionalists by introducing a new model called Aspire that not only has the straightest of straight tubes but even has a reasonable price for a titanium frame of decent quality - check out those welds - at £999. According to their Greg Roche, "we wanted to make a clean and classic frame and were quite surprised when the weight came out at 1,200 grams. Geometry is based on their existing Silk Road model for all purpose road riding; fast enough for racing, stable and comfortable for all day sportive events. They're also selling builds based on the Aspire frame using Shimano Tiagra componentry for £1,599 and Shimano 105 with Fulcrum Racing 7 wheels for £1,799.

Talking of that Silk Road model, a subtle introduction this year to an otherwise externally unchanged frame are discrete mudguard eyes tucked inside the seat stays and just enough clearance to fit 'guards with a 24mm tyre. Internally, the main tubes are now either butted or double-butted to pare some weight and there's a replaceable gear hanger. Also, a good touch on this and all the Sabbath 2012 models will be graphics all in the previously optional sand-blasted finish instead of die-cut vinyl decals which were never our favourite feature. Price on the Silk Road is £1,250.

"Now that the Silk Road will take mudguards, we've felt good about making our September model more of an out-and-out competitor for the Audax purist," says Greg Roche. The head angle is now half-a-degree shallower and the brake bridges are repositioned such that a 28mm tyre will fit along with mudguards. Price is £1,200.

Finally, now that the lightweight advantage of the Silk Road Pro has been somewhat overshadowed by the latest double-butted version of the standard Silk Road, it's been merged into a revamped Monday's Child with even more accentuated "convex radius" seat stays and the most elegant-looking hourglass waisted head tube into which fits a tapered 1 1/8 to 1 3/8 steerer. Price on that one is £1,500.

All the bells and whistles on Koga's Randonneur, even integral lighting 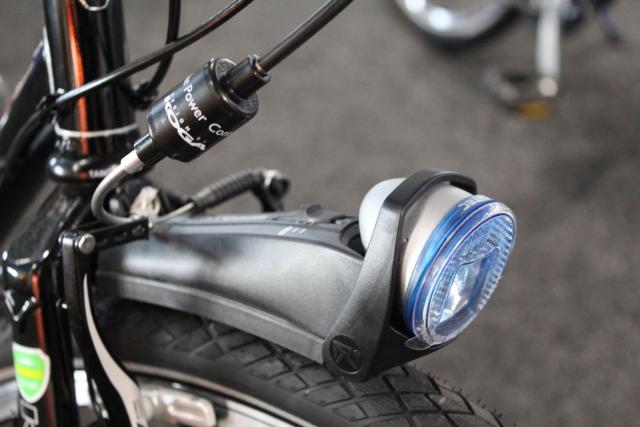 Not that we'd want to see it on every bike but a practical all purpose super-commuter in the European style like the Dutch Koga Randonneur comes complete with a Busch & Muller lighting system where the powerful front light and its switch is built tidily into the front mudguard. The whole lot is driven by a Shimano front hub generator and includes a rear light which, like the front, has a built in capacitor so that the light stays on for a good few minutes when you stop at traffic lights. The bike complete with a pair of Elite insulated drinking bottles and a neat front-wheel fitting bike stand is £1,799. The stainless steel Cielo Sportif Racer SE frame was the most beautiful we saw at Silverstone, with old-school slim tubes and exquisite workmanship. Cielo is the house brand of Chris King, otherwise know for his hubs and especially headsets which are absolutely the choice for the USA money-is-no-object custom frame crowd. Luckily, we were distracted away before had a chance to ask the price of the frame. 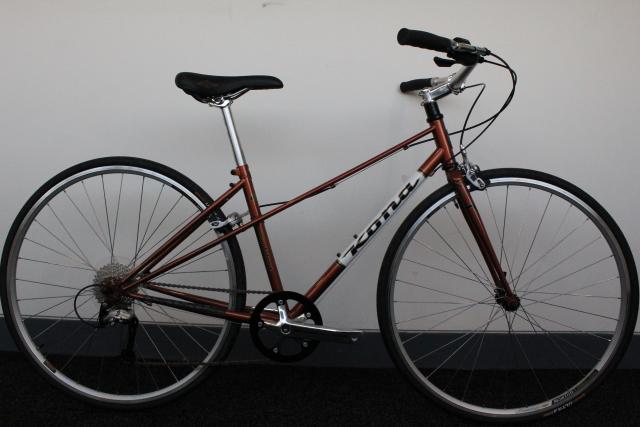 We'd previously mentioned the Kona Roundabout with it's old-French-style "Mixte" frame from the 2012 launch in the Autumn but we hadn't actually had a chance to admire the lovely little details. We still haven't ridden it but we'd like to.

Yes, trailers and even ones for your kid's bike 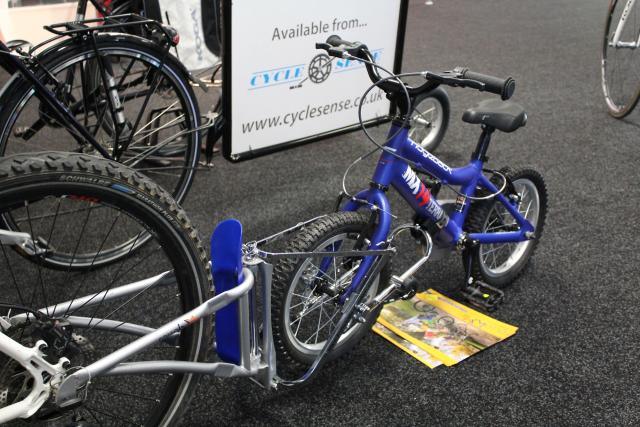 There are various hitches to pull a kids bike but all the ones we've seen look like they're engineered by Walmart. The Swiss-made FollowMe is pricey at £210 but takes any size wheel from 12" - 20" meaning it can grow with the family. In our experience well-made kids' bike paraphernalia can be sold for almost what it cost you when you're done with it. This one either flips up out of the way when you're not towing a child, or completely removes in barely more time using a special rear quick release skewer. 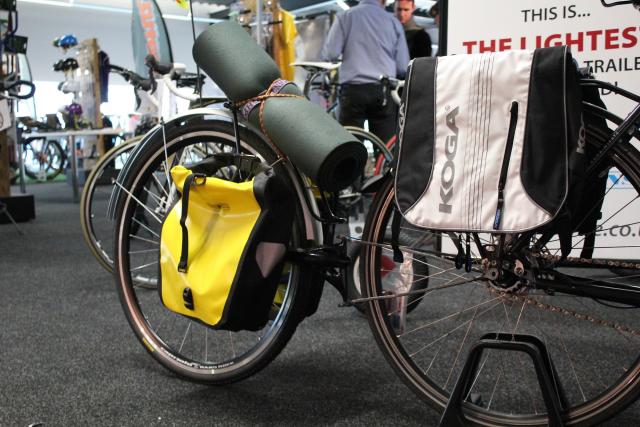 We saw the "world's lightest single-wheel trailer" called Extrawheel that's made in Poland and comes with a range of add-on accessories meaning you can carry as many different-shaped loads as you can think of. The big claim is that in using a wheel size to match the towing bike, it's considerable smoother to pull.

Velocite launch range in the UK 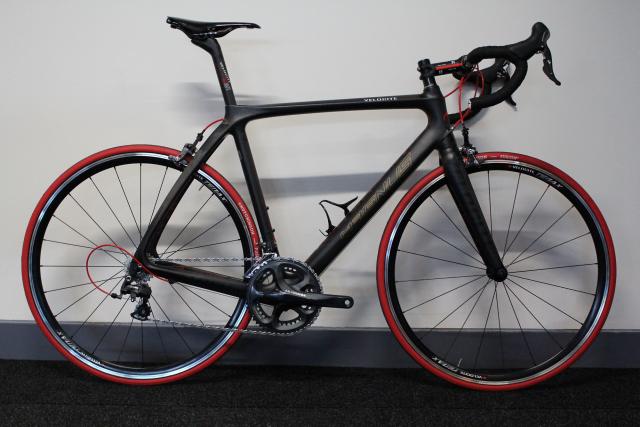 Velocite is a Taiwanese brand that has been around for five years and it’s just starting to get UK distribution right now. The complete range is large although just five bikes are available in our neck of the woods so far – four of them road bikes.

The Magnus comes in at 1,000-1,180g (depending on the frame size). A performance bike, it’s built for lightweight and stiffness using high-modulus carbon fibre. The frame features an oversized BB30 bottom bracket and a tapered head tube (1 1/8in up top to 1 1/2in at the bottom.

The gear cables run through the sides of the head tube – the cable stops are within the frame – while the rear brake cable takes the internal route through the top tube. The dropouts are full carbon, the seat clamp is an internal wedge-type design, and the band for the front mech is about the lightest we’ve ever picked up. 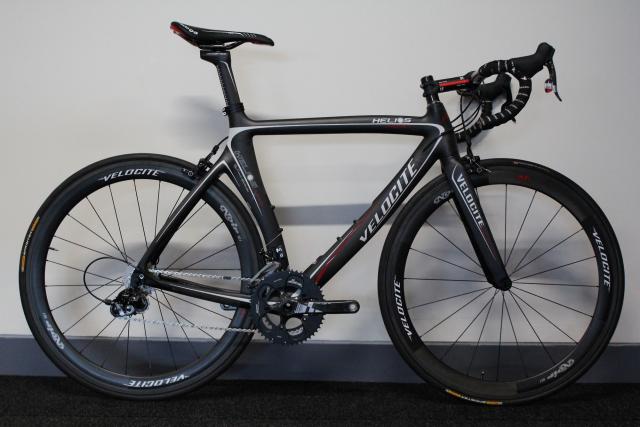 The Helios is the aero bike in the Velocite range with a cutaway seat tube that manages airflow over the rear wheel, and a skinny-bladed fork. Again, it gets a BB30 bottom bracket and a tapered head tube but this time you get internal cabling throughout.

The seatpost comes with a saddle clamp that you can adjust back and forth to alter the effective seat angle and a tri version is available with aero bars ready-fitted. 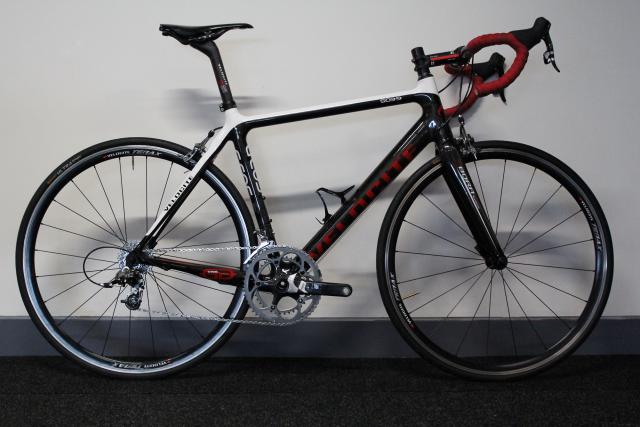 The Geos is actually the lightest bike in the range with frame weights from as little as 920g. This one comes with a sloping top tube and a compact rear triangle designed to provide stiffness, while plenty of exposed seatpost should provide vibration damping. 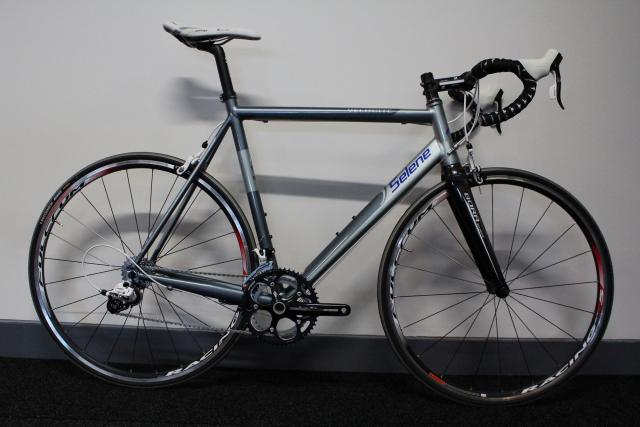 The final road bike in the range is the Selene. Unlike the other three, this one is alloy - 7005-T6 if you want to be precise about it. All the tubes are custom shaped and butted, and manipulated for each frame size.

As with the carbon bikes, the Selene gets a 1 1/8in to 1 1/2in tapered head tube to provide extra front-end stiffness, and an oversized BB30 bottom bracket. As for the frame weight, Velocite claim 1,200-1450g, depending on the size. The frame is £580 while complete bike builds start at £1,690.