It's the annual Core Bike tradefest for us on Tuesday but there's no letup in the shiny kit news this week...
by nick_rearden

As we posted from the recent Birmingham Cycle Show, Kovert is a new bike brand collaboration between Rod Freemans the manager of the Cycle Premier pro cycling team and the sponsors of the same name, Leicestershire-based webshop Cycle Premier. The carbon monocoque FX-PRO Di2 is the bike the pros will be riding this year and the press demo model quite literally rolled into the office as we were posting this. There's a 'Just In' in the works following on shortly.

We can tell you for now that this range topper with Ultegra Di2 will sell for £2,999.99 but there are further alloy-tubed 'FX' monikered bikes starting at £999.99 with a Shimano 105-based transmission. All the models appear to feature Michelin tyres which is never a bad thing in our book. Oh, and the posh carbon frame will be available on its own for £1,299.99. 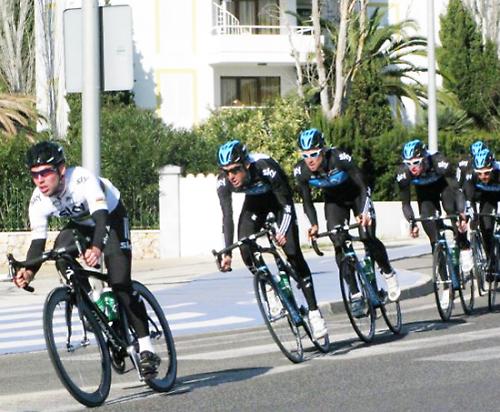 Eagle-eyed road.cc newshound Simon MacMichael noticed that the Sky boys training in Majorca seem to be wearing different helmets to the Kask Vertigos they're known for these last two seasons. The profile seems to be closer fitting and is there a little swoopy bit at the back like the new £100 Mojito model that's been delivered to our local emporium Cadence Bike Shop in Bath this week? There may be a new pro-level model, too, but we'll find out next Tuesday because Kask is one of the brands showing at the the Core Bike trade show in the Midlands. Stand by for show reports.

Rapha Sales kicks off with queues round the block

Amazing scenes in London this morning as the Rapha sale started off with quite a queue. It's on Saturday and Sunday as well and the received wisdom seems to be that the sale is where it's at if you like the idea of the quality but balk at the prices, don't worry if you are going on Saturday or Sunday… or if you are at the back of the line, Rapha tell us they do refresh the stock on sale so that everybody gets a fair crack at a bargain. 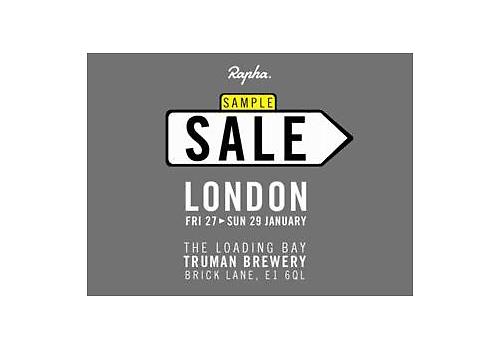 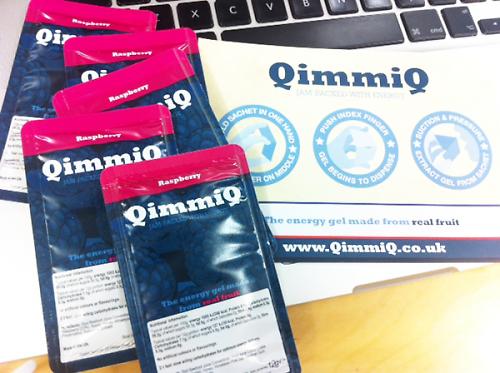 It's early days for the new Qimmiq brand - pronounced 'Kimmick' and apparently Inuit for 'Husky' - but they showed their natural fruit energy gel at the Birmingham Cycle Show where the feedback was positive on the raspberry taste but potential customers commented they wanted smaller packs than the usual 25 - 100g options offered by other companies. According to Qimmiq, cyclists often find themselves preferring to save half an opened but un-resealable standard pack so finish all of it resulting in sickness and stomach problems.

To that end, they've launched with tiny one-shot 12 gram sachets that crack open easily with one hand. The natural-tasting raspberry is certainly delicious and quite 'tart' which will surely be an improvement on 'sickly sweet'. Interestingly, the main component, however, is everyone's favourite health product at the moment, beetroot. Qimmiq say they're also working on a savoury option as well as larger sizes. Mostly, though, they're looking for shops to stock the new 36-sachet boxes which sell for £28.44 or 79p per sachet. Individual sachets are 99p each. 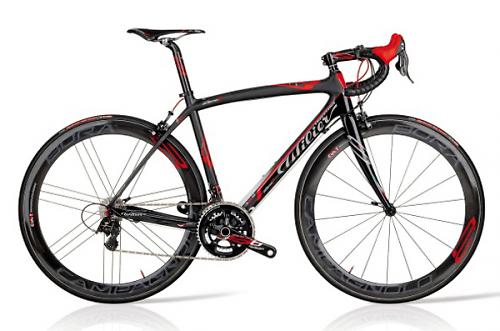 We imagine that quite a few specialist bike manufacturers' sales are up - especially the ones making road bikes - but Wilier Triestina have given us actual numbers, which is nice. Overall unit sales worldwide are up from 23,026 in 2010 to 28,190 in 2011, an increase of 18%.

A healthy sign to us is that if 6,000 of their machines were sold in their native Italy, a 35% increase on 2010, that must mean the balance was sold in 'foreign' markets like our own and sure enough countries as diverse as Vietnam, China and Brazil feature in Wilier's export conquests in addition to easier predictions like Germany - which showed a 50% increase in numbers - France (35%) and the Benelux countries (47%).

They attribute the success to a constant investment in R&D citing the recent Zero 7 and Twin Foil models as examples plus feedback provided by the Lampre ISD WorldTour pro team. "The suggestions from Alessandro Petacchi, Damiano Cunego, and Michele Scarponi allow us to bring champion-worthy materials and geometries to the everyday cyclist," as they put it.

According to Managing Director Andrea Gastaldello, "Our partnership with a top-level team like Lampre ISD gives us great visibility in the world and allows us to showcase our brand in markets where professional cycling is not widespread. Furthermore, we have been able to acquire market share because we offer high quality products with Italian style and competitive prices."

Japanese home trainer makers Minoura have collaborated with app publishers Soneru to produce a training tool called LiveTraining. At its most basic level the program will function with Ant+ sensors you may already have either on your bike for speed, cadence and power, or your chest for heart rate but it's on a static trainer like those in Minoura's 'V' series range that the app will fully justify its £6.99 price. There are famous mountains to climb like L'Alpe d'Huez and Mont Ventoux and you can race either a phantom competitor or previous performances by yourself. 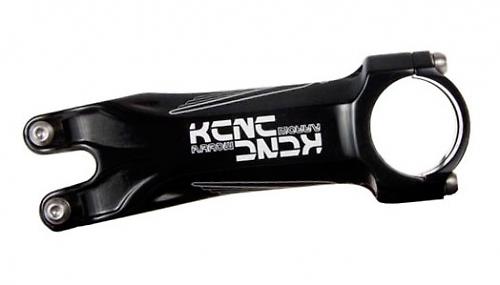 KCNC have a nice new machined 7075 aluminium road stem called Arrow which comes in shiny painted black or white finish. The lengths available are 8, 9, 10 or 11cm and the 7° angle means you can mount it one way up for the classic level-stem roadie look or the other for a bit of rise on the handlebars. Weight helped by titanium bolts is 122 grams for the shortest version. Price is £58.99

Also, "a while coming" they say at KCNC, cantilever brakes which according to the Taiwanese CNC machinists, "are aimed at cross racers and seriously light with skeletal arms machined away to the barest rigid structure." The construction is all 7075 alloy except for the fittings which are either Scandium aluminium or Titanium withwith stainless steel springs. The cable stop for the front attaches to a central fork crown mount - if needed - while the rear has a mount that fits around the seat post. KCNC claim an all-up weight with all fittings 250 grams. Price is  £299. 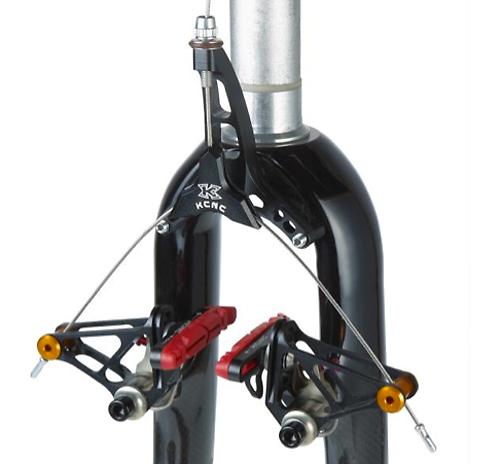 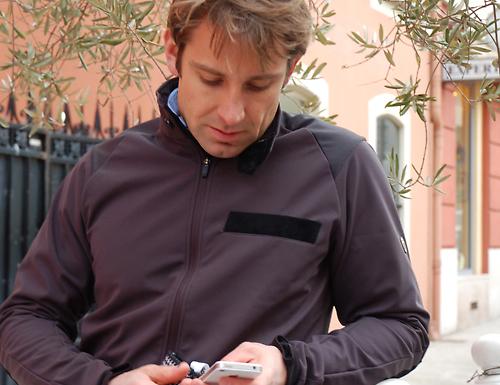 In keeping with their motto, "perform on the road, be chic in the city", Cafe du Cycliste's new Ginette jacket is made with a "very technical fabric with windproof and waterproof membrane. Whether your favorite drink is carbohydrate powder mix or vintage burgundy wine Ginette will be out there with you," according to the Cote d'Azure-based, cafe-owning Frenchmen. 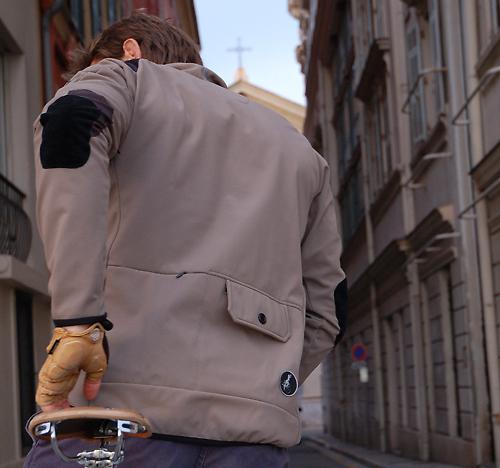 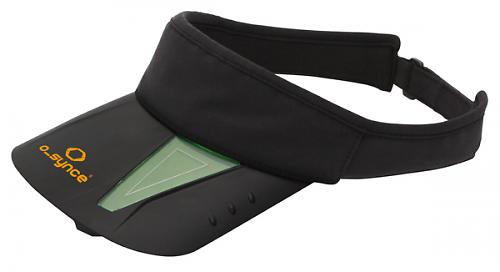 We've seen these o-synce guys at Eurobike and briefly tried their data4vision 'screen-eye' visor which convincingly projects data such heart rate, speed and distance into your direct field of vision but they now appear to be getting closer to market with launch coming in the Spring. The Ant+ wireless clever stuff is built into the sealed plastic visor which detaches from the adjustable headband for washing. We're told that although the visor works just as well for running, rowing, skiing or whatever, o-synce have taken helmet designs into account; in theory it should look little different to the peak of the classic cotton casquette beloved of racing cyclists when worn under a helmet. Recharging and data uploading is carried out via micro-USB. Price €149.

UPDATE: o-synce have told us they're also working on a complete helmet with the visor inbuilt.

And finally, look at these guys... 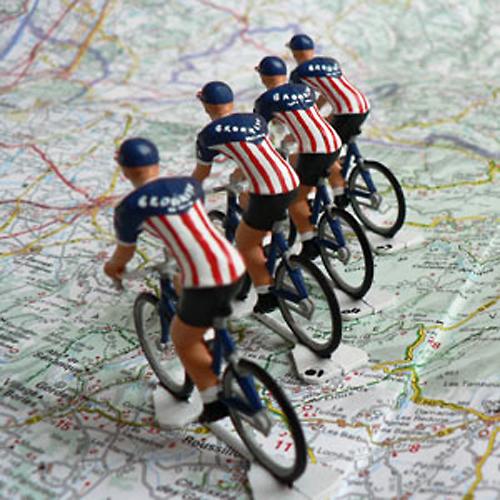 We've mentioned these little French cycling figurines before but Urban Hunter have a batch hand-painted in classic Brooklyn kit. Over to them,  "One of our all-time favourite teams was Brooklyn in the 1970's. Roger de Vlaeminck was the best-known rider. He won Paris-Roubaix four times. We always loved the Captain America colours and the blue Giro bikes. The team sponsor was Brooklyn, a chewing gum maker from Italy." Price is £14.95.