Austrian-made Xentis wheels launch into the UK with 'Active Turbulator'

Xentis, makers of carbon road and mountain bike wheels in both spoked and full-monocoque forms have launched into UK bike shops with more or less immediate effect. The brand is already established particularly with triathletes in Germany and it won't come as any surprise that the national road and track squads of Austria, the country where they're made, have been racing the wheels for two seasons.

When you've spent as much time as we have at the German Eurobike show every year, it's not that often something comes up in the UK completely unseen but their Fritz tells us he's been there the last two years so it must be us not paying attention*. Anyway, here they are in Britain for the first time and very nice they look, too. First off, this is some pretty expensive manufacturing; making carbon wheels. We were initially thinking that rebadged generic low-cost Chinese wheels were on the agenda but Xentis tell us that despite the European address where all the carbon is fashioned and the wheels built, they're actually owned by the same US engineering company that makes the famous Sebring and Remus automotive parts - especially wheels - so they're not exactly lacking in either their own engineering brains or a big enough bank balance to buy some expensive machinery and clever staff.

What they mostly have though, according to Fritz, is a fascination with what's going on in bicycles and one or two of their senior people being actively involved in cycling while thinking, as engineers do, "We could do that." Anyway, the first inspection reveals a number of details that are hardly generic. For a start the rim walls finish at the brake tracks with what can only be described as a 'wavey' ridge, what they call their 'active turbulator' and what Fritz tells us is their way of detaching the airflow in much the same way a Zipp wheel does with its dimpled 'golfball' surface. And talking of brake tracks, the Xentis Unique Selling Point is its braking surfaces which Fritz tells us only require standard brake blocks and are equally efficient dry or wet.

What's the secret? Well, all Fritz would say is that the brake tracks don't have the same resin surface that other carbon rims have. He smiled enigmatically but you can see that it's either somehow moulded or subsequently machined off to the bare carbon material that he claims is as durable as aluminium and without the sphincter-gripping 'grabbiness' of carbon resin, even with the special brake pads. What they were were looking for, according to Xentis, was a nice linear response.

So, a quick run down on the range:

There are two overall wheel styles; firstly, all-carbon rims mounted on stainless steel spokes and their own hubs. Rim depths are 25, 42 and 58mm in clincher and tubular forms (except the 25mm) with the price the same for both. The spokes are available in either white or 'dark' finish with 20 spokes at the front, 24 rear and a rider weight limit of 100Kg. Xentis say they're especially proud of the way the carbon wheels are drilled for the spokes at a precisely correct angle in relation to the hub flanges, reducing stress, building a stronger wheel and incidentally preventing any water ingress. These wheels are known as Squad 2.5, 4.2 or 5.8, details as follows:

Then there are completely carbon monocoque wheels which are called Mark1, Mark1 TT or Mark2 TT. The Mark1s are both four-spoke design with the TT version having a more extreme aerodynamic profile. The Mark2 TT wheel has five spokes and is purely intended for time-trials and triathlon. Again there are clincher and tubular versions of each, with identical pricing. The five-spokes are claimed by Xentis to be equally aerodynamic to the fours but more tolerant than the Mark1 TT to cross-winds, implying that they're more versatile if you're only going to race everything on one set, although obviously they're slightly heavier and pricier. Needless to say, you'll be prevented from starting any UCI-sanctioned road races with these four and five-spoke monocoques which means your local British Cycling race commissaire will be taking a dim view, too. Time-triallists and triathletes can fill their boots.

There's also a four-spoke mountain bike wheelset called Kappa that the singletrack boys who were at the UK launch, too, will undoubtedly be posting about shortly.

The hubs are made to a Xentis design in Taiwan with high quality cartridge bearings that will be upgradeable shortly to optional all-ceramic sets. Cassette freehubs are available for Campagnolo as well as the common ones and a cursory spin of the body seemed to reveal a nice uptake with evidently from the sound more than a token couple of pairs of pawls. All the monocoque wheels have a 120Kg rider weight limit and are unidirectional; this way, says Fritz, the wheels can be much more aerodynamically efficient at a greater range of wind yaw angles. God help you if you put them in backwards.

What else? Oh yes, all the rims except the Squad 2.5 are fitted with a computer magnet balanced out against the valve hole and all the wheels are checked for balance anyway. Each valve hole has a plastic liner to ease valve entry and there's an external bar code and internal RFID chip fitted for subsequent identification and tracking.

The question you're wondering of course is whether we left the Harrogate product launch with our order in place for the first pair so we can unleash Mat Brett down the Chippenham bypass to fully test those Active Turbulators. Of course we did.

* Actually, a scan of the road.cc picture galleries reveals a ton of details of Xentis wheels from Eurobike 2010 so *someone* has been paying attention. 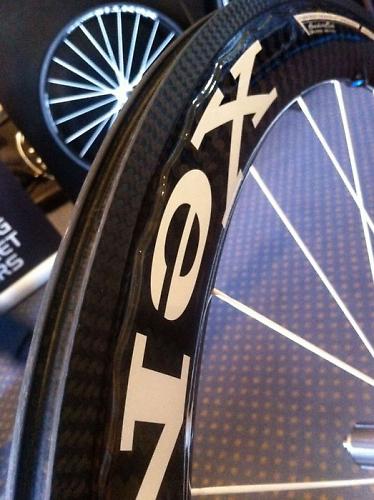